Microreview: The Fallen by Ada Hoffmann

The Fallen continues Ada Hoffmann’s story of Jasira and Tiv, whose inadvertent rebellion against the Gods and the Angels that serve them has irrevocably not only changed them, but the planet of Jai as well. 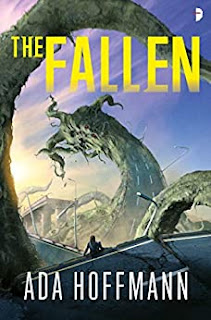 When last we left the pair, after Jasira’s contact with the Outside and the eruption of the Plague literally bringing down the wrath of heaven on them, they had managed to escape the Angels and set themselves up in a region of the planet Jai where the laws of physics were...different, and malleable. Destroying the region and all within it is a last resort the Angels are not yet ready to implement, but their forces are waiting just outside the Chaos Zone, ready to pounce. The problem for Tiv, is that she is trying to hold together the fragile society they have built in the zone, Jasira herself is very much not holding herself together, when Tiv, and the others, need her the most.

This is the story of Ada Hoffmann’s The Fallen, sequel to The Outside. [I reviewed The Outside here in 2019: http://www.nerds-feather.com/2019/07/microreview-book-outside-by-ada-hoffmann.html ]

What happens after the heresy and defying the Gods, and having to actually build and hold things together in the wake of the drama of the first novel and the contact with things outside reality. After you make the dramatic break, how do you hold things together, especially built on such a slippery foundation?  Hoffmann’s story explores this in detail, showing how the society within the zone on Jai depends strongly on Tiv and her counterparts. It’s a precarious situation for Tiv and company and the story of them trying to hold the Zone together itself could be the mainline of the novel.

The novel, however,  provides much more. I was conflicted at first by the novel taking Yasira off of the table for much of the novel, relying on Tiv, but I realized the clever switch of the major POV here to Tiv and it works rather well, and like this. Yasira, with her contact with the Outside, is now something much more than human, and the Seven (including Tiv) have to hold the Zone together, help their people and keep watch on what the people are doing. Yasira is not quite a deus ex machina, but keeping her offstage, and mostly out of sight, and keeping her power at bay does mean that Tiv and the others have to find other solutions to the problems besetting them. This is accentuated by the narrative cruelty of Tiv, among the Seven, not having any “superpower” granted to her by the Plague. She can’t manipulate reality as the others can (who really do some across as “superheroes”) and more so, is the ostensible leader with Yasira incommunicado (and clearly in distress for all of that).

There are some interesting narrative tricks, too. In addition to Tiv, and in the end, some from Yasira, the point of views we get in the book help illuminate the narrative. Elu and Akavi, the former angels of Nemesis now on the run from the Gods themselves for failing to stop Yasira, Tiv and Dr. Talirr from unleashing the Plague, definitely want to finish the job, regardless.  I also particularly liked Enga as a point of view character here, getting inside of her head and how she thinks was effective on two levels--first, it helped illuminate a rather mysterious character (or more of a force of nature) and second, like with the stories of Tiv and Yasira, it helped strengthen and promote the neurodiverse voices and  overall diversity in the book. Hoffmann’s protagonists, Enga included, are fascinatingly flawed individuals who nevertheless try the best that they can.  Rather than making it a black and white story of those who support the gods and those who oppose them, the use of character voices like Enga also show other sides of the conflict in Hoffmann’s verse.

The narrative tricks also extend to the timelines and order of events in the novel as well. There is a lot of hopping around in time and events throughout the book, which makes sense given that the characters are quite literally in a zone of reality where the rules of the universe don’t quite work the way they are supposed to, this makes sense. The novel disorients a reader in its experience, and I think that is a deliberate choice on the part of the author.

But this also illuminates a weakness for me for the novel. Where I think the novel doesn’t quite hit the worldbuilding, characters, representation and other elements is the plotting. The through line of the plot isn’t as strongly delineated as the other elements of the book, and I think that is a weakness. It’s not a fatal weakness for the novel, and I delighted in the other elements of the book, but for those who want a strong overall plot, this novel feels a bit of a step back from the first book, whose inciting incident definitely kept the plot rolling with its implications and results. Here, the novel begins sometime after the end of the Plague, but there isn’t the same sort of narrative drive. The hopping around  in time and space masks this problem rather than solves it in my view.

Overall, for all it discomfited me, and the plotting frustrated me, I enjoyed this long awaited followup to The Outside. The world that Hoffmann creates here, particularly, is one I would like to spend some more time in.

Bonuses: +1 for continued interesting worldbuilding and asking the question of “what happens next” effectively

+1 for interesting use of point of views to illuminate the narrative.

Penalties: -1 A lack of narrative plotting drive in the plotting is a real weakness of the book.