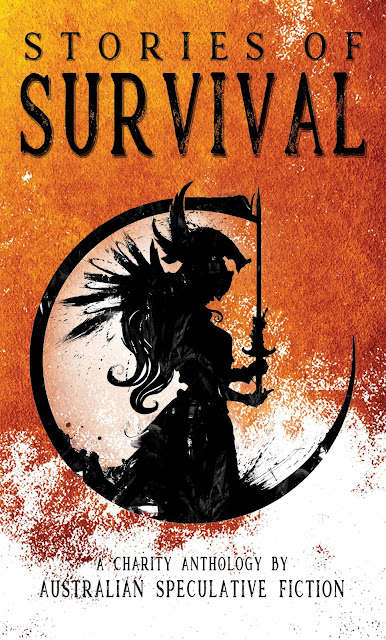 To honor the memory of beloved fantasy writer Aiki Flinthart, the Aussie Speculative Fiction Group has launched the charity anthology Stories of Survival, where various Australian authors have contributed their explorations of characters who stay strong against heavy circumstances.

The Storyteller by Kylie Fennell, a tale told by a tree so that others may keep telling it, makes an understated defense of the urgency of preserving and sustaining stories so that in turn they preserve and sustain us.

The Forgotten Sea by Louise Zedda-Sampson boasts an abundance of sensory detail and effective imagery. It begins as your standard haunted house story—but it turns out it's the visitor who carries her own ghosts.

Of Slaves and Lions by Pamela Jeffs follows an exile as they return to their childhood home, meditate on the survival of places and of the meanings they once carried, and wrestle with the ways the past can be a captivity.

Faltering by Monique McLellan is set in a resort town reduced to an artificial simulation of itself, where a returning tourist yearns to find something, even if it's just a shadow, that remains from the time of his first visit.

Maki by Nikky Lee tells the rescue of a beached orca in parallel with a married couple's struggle to rescue their relationship.

Tox Hunt by Tim Borella has as its protagonists the few remaining descendants of a vanity genetics fad that went horribly wrong, now on the run as fugitives in the Australian wilderness.

Three Tasks for the Sidhe by Leanbh Pearson is an exquisite fairy tale, composed with a fine ear for precise verse, about the steadfastness of a love capable of rising above the limitations of human mortality.

Alice's Hope by Jade Wildy is the adventure of a spy and treasure hunter on a desperate quest to deliver into the proper hands a mysterious painting that contains ancient secrets that could save her world.

Divine Engineer by Claire Fitzpatrick is the bad exception in an otherwise fine anthology. Its protagonist is flat and uninteresting, its succession of events does not reach the status of actual plot, and at its core is either an inscrutable metaphor or an appalling incomprehension of basic astronomy.

Spirit of the Koi by Lisa Rodrigues manages to contain a universe of bittersweet emotion in its short dialogue on grief, consolation, and the ancestry of space wolves.

Valuer of Souls by Kaybee Pearson turns the theme of heroic survival on its head and asks which extreme forms of human defiance would make us worthier of scorn than the forces of decay we claim to be fighting.

You Better Not Be Couriering Coriander by Brianna Bullen takes our COVID anxieties and gives them sparkling fairy wings in a fun, fast-paced trip from a land of ghosts to a city of mythic people just trying to get through their day.

Way-Bread Rising by Tansy Rayner-Roberts, another pandemic allegory, draws the reader back to early 2020, when we were all learning to bake our own bread, and adds to the mix a pinch of grandmotherly magic.

Bitter Brews by Kirstie Nicholson shifts the focus just a bit away from the iconic figure of the survivor and toward the set of adversities that force people to become survivors in the first place. This time, the protagonist finds a rescuer, but eventually learns to rescue themself from their rescuer.

Chocolate Cake and Carnage by Aiki Flinthart is a hilarious prison escape adventure where nothing goes according to plan.

Reading these stories is an eye-opening experience. They are in general very short, much more than what we usually call short fiction in American speculative magazines. However, their brief extension does not translate into Hemingwayian dryness: they are highly poetic, rich with lyric virtuosism. Curiously, they all have an open ending, which I don't know whether I should attribute to a feature of the Australian short story tradition or to the theme of this collection, as a way of signaling the possibilities that remain open even in moments of dread. Be that as it may, Stories of Survival is more than deserving of your attention. It can be finished in one afternoon, but it will stay with you for much longer.

All proceeds from this book go to Melanoma Institute Australia.