Mazes of Power is a thought provoking and immersive  work of sociological science fiction in the tradition of genre luminaries like Ursula K. Le Guin, Doris Lessing, Jack Vance, and Eleanor Arnason. 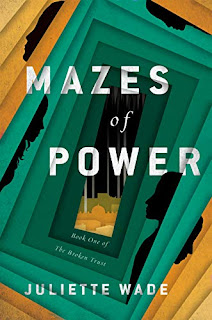 In a world where humanity developed along some very different lines, and now, in a spiral of slowly decaying technology lives almost entirely in underground cities, such as Pelismara. The surface world is dangerous, alien, not to be visited if at all possible. In a stratified world riven by class and social status, the conflict over the succession to high office envelops the Grobal Caste, the nobles of this world. Disease, intrigue and assassination are thread to those scions might ascend to that role, as well as the young man who has pledged himself as a servant to that family. The entirety of the Varin, aqll the seven castes, not just the Grobal, not just the servant Imbati, all of them, are on the edge of a knife, and the actions of Tagaret, Nekantor and Aloran will decide which way they will fall.

This is the story of Juliette Wade’s debut as a novelist, Mazes of Power.

Sociological science fiction is a tricky business, especially when you are building a world from scratch with no connection to our own. Building up a unique human society in such a way in a novel, and keep the story moving at the same time, is no mean feat. Wade’s training and previous work is at short story length, and I found those skills served her well here, as she uses careful writing and information density to try and convey the important, plot and character relevant aspects of her world to the reader. The dense reading makes this a slow novel to read, to unfold everything that the author is sharing. Skimming this novel is a good way to miss the richness of the book, or worse, be confused as to what’s going one. This starts at the very first sentence. The very first line of the novel gives us a character beat and tells us something physically fundamental about the world and how it is different than ours. The novel as a whole uses this strategy.

And what a world. A class and race-riven society in a slowly decaying world underground, where the ruling caste struggles from power within, and keeps in mind those who are without. A disease, deadly to the vulnerable ruling class, a horror of contagion and sickness that is positively Victorian. A deep look at social relations, with servants bonded to their masters, and houses and even the city aligned in terms of social roles and standing. The novel’s world feels like Jack Vance decided to team up with Ursula K LeGuin and the result is wonderful. And I didn’t even mention the ornate and clever use of language in the novel. There is an invented language in the novel and the use of language, between social classes and within social classes, also blends into the world that Wade creates here.

There is a lot more than the world here to love. There are the characters and the story. The story centers around two brothers, the reticent seventeen year old Tagaret, who really doesn’t want to get involved in the family’s game of politics. He contrasts with his antagonist and brother Nekantor, younger, more ambitious and definitely interested in promoting the First Family’s bid to become Heir to the Throne. They are a study in contrasts, strengths, weaknesses, and flaws, especially Nekantor. I felt for Nekantor, given Wade’s very careful revelation of his disability and how it is handled is nuanced and skillfully done.

The third of the major characters is the Imbati Aloran, who in a way provides us with the closest thing we have to being the newbie point of view role to help explicate the world. This is only to a limited extent, since its to help build and develop the family and its social circle. Even so, he is far more than just a straight up exposition piece, as his relationship with Tamelera (mother to the brother) is an extremely interesting one. It is here that Wade seems to have the most fun in developing how a different society would work and the nuances, expectations and defied expectations of that society.

Given the iceberg rule, I can’t imagine just how much of the world Wade has that is only inferred and infused into the work indirectly and supports the stuff above the surface and it feeds into these three characters. The characters are passionate, driven and significantly larger than life, and in a good way, one can call them operatic in that full vividness in how they love, hate, strive and act. Readers worried that they will be buried underneath the seas of the world building will find that the character beats not only keep them afloat, they zoom across those seas until the novel’s conclusion. The novel is the start of a series, but it does end at an important pivot point with a resolution that if you wanted to one and done the series, you could. I for one most certainly do not and want to see more with the characters and the world Juliette has created.

The novel’s themes of class and social stratification, and society under stress and what the characters within can or should do resonate very well indeed. If all SF is really about the present instead of the future it depicts, this novel definitely delivers in that regard. It is easier to see our own riven  society, with power and wealth being concentrated into ever fewer hands, with the Varin and their society which formalizes and reifies that sort of thinking and society. Reflected in the world of Aloran, Tagaret and Nekantor...is our own world.

Mazes of Power is a powerful work of sociological science fiction that looks at us, through the lens of a society that is alien, and different, and yet the characters are unmistakably human.

Penalties: -1 for a little bit of roughness in the plotting