The Hanged Man by K C Edwards broadens and deepens and improves the quasi Urban Fantasy story of expatriate Atlanteans living on the island formerly known as Nantucket. 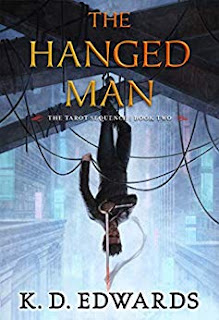 The Last Sun introduced us to a fascinating world of Atlanteans, their world gone, living on the occupied island of Nantucket. A world where the most powerful Atlanteans carried terrible magical power, Rune, last heir of fallen House Sun, became wrapped up in the machinations of other, great Houses, and slowly coming into his own power in the process. An unusual sort of urban fantasy, The Last Sun was notable for its invention, its strong character focus, and the queer friendliness of Atlantean society.

Now in The Hanged Man, K.C. Edwards continues the story of Rune, and Brand, his bonded Companion, and their slowly accumulating set of friends, lover, and allies. The focus starts with Max, whom in a bit of linguistic trickery in The Last Sun Rune has been bound to raise from a young man to adulthood as his guardian. It turns out Max had been previously promised in marriage to the mysterious and powerful Hanged Man.And the Hanged Man is now aiming to collect Max for that purpose. Rune will not allow his charge to fall to that fate, and so a tale is told.

In The Last Sun, we were dropped headfirst into Rune and Brand’s world and their lives on New Atlantis (aka Nantucket). There was, I noted, a distinct lack of explanation of how we got here, Edwards preferring to focus on the immediate story rather than spending a lot of time explaining how and why Atlanteans exist and how we got to this point. I admired this forthrightness even as I wanted to know a lot more about the background. In The Hanged Man, we begin with a Prologue that clears up for me a lot of the questions I had in the backstory of the Atlanteans and how they wound up to diminished but still potent on the island of Nantucket. In two pages, I had a lot of my questions cleared up and launched me into the book. It also has the salutary effect of making it easier for new readers to start here rather than the first novel. I think that misses the opportunity to see the world from the beginning, but time is a limited resource, and between this prologue and how the author layers in references to the first novel, one could conceivably start the Tarot Sequence here.

That possibility of starting here is accentuated by the tonal shift between the first novel and the second novel. By and large, the first novel features Rune and Brand as relatively (by the standards of perception of the rest of their society) as low powered urban fantasy protagonists. Rune is from a fallen House, the last scion of it, and has a paltry portion of the power that he would have if his House had not been destroyed when he was young. Even with his good relationship with Lord Tower (and by now you can guess the Tarot theme to the Great Houses of Atlantis, yes?), he’s not quite in squalor, but he does have to hustle a bit in order to eat.

In The Hanged Man, thanks to events in the first novel; Rune is starting to come more into his own power and that talent is recognized, even as he starts off in circumstances only somewhat improved from the first novel. However, the novel ramps up quickly in terms of the magic and power we see, and power is temporal as well as magical. It reminds me of a similar shift in gears between Where Oblivion Lives and Carved From Stone and Dream by T Frohock, where the second novel definitely changes the formula and the power levels, bringing more and much more powerful magic and powers into play. Edwards gamely shifts into this gear change well, and it gives a different look at New Atlantis than as seen in The Last Sun. Rune is still relatively underpowered compared to his allies, because of his impoverished status, but he makes up for it with loyal allies and friends, and, even called out in the narrative, an inventiveness that is born of his relatively low power level. Rune and Brand HAVE to be scrappy and punch above their weight, be it exploring the haunted ruins of House Sun or facing off against the minions of the titular Hanged Man. So when we see the high octane magic, we get a true sense of the heritage, power and lost legacy that Rune has lost as the last scion of a fallen House.

Another instance where The Hanged Man improves visibly and significantly on its predecessor is including more female characters into the mix, female characters with depth, backstories and power and potency. The previous novel really relies on the Rune and Brand relationship, and thrives on that relationship. The book, it should be noted, is dude-heavy as a result, albeit queer-dude heavy. In this book, there is a change up by adding more female characters to the mix, starting with Corinne, a former Companion whose hiring of Rune and Brand propels much of the plot revolving around Max, and continuing on with a sheaf of female characters. Gloriously, this culminates with Lady Death, a young frost mage of power, beauty, confidence, and absolutely willing to mix it up, even with someone as potent as The Hanged Man. We get to meet a lot of the Major Arcana in this second novel, and she is far and away my favorite new character.

Fans of the first novel, though, should not be worried. The Rune and Brand relationship, Arcana and Companion is here, as strongly written and explored as it was in the first novel. This novel provides lots more touchstones for that relationship to work. Rune’s ward, Max, yes, of course, is the major touchstone, but also Addam, Rune’s new lover, is something the relationship explores. Also, when Brand starts interacting with other Major Arcana in a sustained way, that also shows change, growth and the depth of the bond between them. Some of the plot of the novel, too, explores what it MEANS to be a Companion, to be magically bound to an Atlantean, and Edwards explores that as well.

And that is really where the strength of the plotting of the novel lies. For all of the interesting magic and action beats and the cool set pieces that Edwards sets up in the narrative (and there are some really inventive and memorable things, especially the Battleship), the novel runs and runs and really develops from the characters, their interactions and their choices. That simple “trick” in the first book that gave Rune a ward leads, basically, to the concordant series of actions and reactions that ricochets throughout this novel. The titular Hanged Man is an antagonist, and still all of his choices and actions flow from his character. The conflict that Rune forces here and the action all sides take make sense. And no doubt, the events of this novel, the choices made (including a huge one by Rune) is going to pay itself forward on future plotting.

One nit: this novel significantly complicates the relationship map of the Tarot Sequence verse and a character sheet or guide would be useful especially for new readers. In short, though, The Hanged Man is an improvement and leveling up of an already intriguing and character focused book to carve out an interesting space in Urban Fantasy that is uniquely his own. With all of the revelations, changes and worldbuilding in this novel, I look forward to what Edwards can do going forward with these characters.

Bonuses: +1 for rich and inventive expansion of worldbuilding, +1 for significant improvements in character balance from the previous novel

Penalties: -1 The Book probably could use a Dramatis Personae or other guide given the complexity of the world at this point.