Welcome to our second monthly installment of Thursday Morning Superhero.  I am still working through what these posts will look like and things might change from month to month, but I will try to include a graphic novel pick of the week as I hope to do a better job reading older comics. 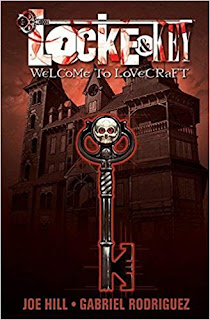 Locke and Key:
I cannot wait to binge this series starting tomorrow!! Early reviews are in and I am very curious to see what changes have been made from the page to the small screen.  Joe Hill talked about how this adaptation is different from the comics and from the early footage it appears to veer away from the source material early.  While that concerns me, I also appreciate that consuming something via Netflix compared to a comic are quite different.  I also enjoy being surprised and hope I can take my fanboy hat off and enjoy this as its own thing.  In next month's post I will provide my review of the first season and will hopefully be excited that a second season has been announced.  The writers have already starting working on ideas in anticipation of a call for a second trip to Keyhouse. 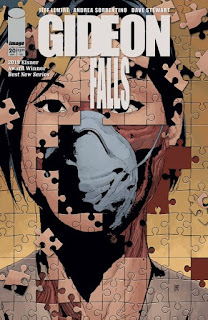 What I'm currently reading and digging:
It should come as no surprise that Eisner Award winning Gideon Falls has remained at the top of my pull list. Jeff Lemire and Andrea Sorrentino have consistently delivered one of the most puzzling series that has me completely gripped. Issues number 20 and 21 have dropped since my last post and this series has really taken a Twin Peaks turn and I am not entirely sure what is going on and that is ok by me.  There is a reason that this series has won an Eisner and is being developed for a television series.  While I won't get into details, I am enjoying Captain America's journey back into the hearts of Americans, the new horror series Basketful of Heads by Joe Hill, and Criminal from Ed Brubaker.  Brubaker's return to Criminal was a highlight of mine in 2019 and it remains a noir masterpiece. 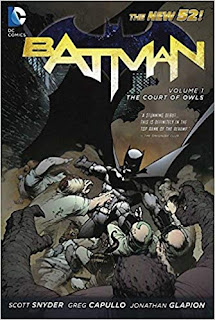 Graphic Novel Pick of the Month:
Batman Vol. 1: The Court of Owls - Nine years ago DC took a dramatic stance to address its shrinking customer base.  At the conclusion of Flashpoint, someone in the DC offices hit ctrl+alt+delete and rebooted the entire thing! The highlight from this reboot, by far, was Scott Snyder's run on Batman.  The Court of Owls remains one of my favorite comic book arts of any property. Centered around a secret society that had been pulling the strings behind the scenes in Gotham for hundreds of years, Batman is not aware of the gravity of his discovery of this group and the repercussions he will face from its members.  What Batman originally thought was an old wives' tale used to scare children manifests itself right before his eyes and threatens everything he cares about. Snyder does an amazing job crafting the mythology surrounding the Owls and Greg Capullo's art charted this reboot down a dark and gritty path appropriate for Batman. If you have not read this arc you should do so immediately.