In Steel Crow Saga, Paul Krueger constructs a one volume epic fantasy with strong inspirations from Pokemon, deconstruction of colonial narratives, and much more. 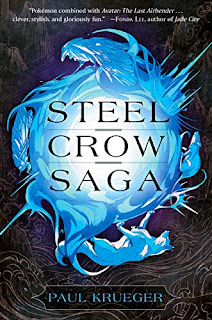 Since the 1990’s, the phrase has come in the English speaking world to be the catch phrase for the Pokemon universe. A universe where esoteric beings, sometimes with startling powers, are used as allies, weapons, surrogates by human trainers in competition with each other. It needs little more introduction from me. Now, as it has been such a fixture in anime, in gaming and in genre culture, it is inevitable that it starts to be inspiration for fantasy writers and their own universes.

In Paul Krueger’s second novel, Steel Crow Saga, he takes the idea of Pokemon and looks at how they might work in a secondary world fantasy setting, specifically one that has just gone through an early 20th century tech level  war and revolution.

---
Krueger’s world feels a lot like an East Asia that has just been convulsed by war, conquest, revolution, and then revanchism. The Tomodanese, whose culture and general lines feel a lot like Imperial Japan (or perhaps the Fire Nation for Avatar fans) have the ability to manipulate metal. Being a metal poor set of islands, they have gone on a rampaging war of colonial conquest, and conquered large portions of their neighbors. The Shang feel very much like an Imperial China, the Sanbu Islands feel something like the Philippines . The Jeongsonese feel like an oppressed ethnic minority within Shang, of a Korean bent, especially since they have been battered around by various larger powers. The Dahal (with whom we sadly do not get a viewpoint character) feel like a more distant, mercantile focused Indian nation). After years of conquest, revolutions in all of these lands have overthrown the Tomodanese and their metalpacting army, and, reversing the tide of battle and war, carried the war to the home islands of Tomoda themselves as occupiers.

The story of Steel Crow Saga revolves around one of the viewpoint characters, Jimuro. He is to be the Steel Lord, the head of the aforementioned aggressor in the wars. Tomoda. After years growing up, both as Tomoda strode across the world, and then as a captive of the risen up Shang, he never expected to rise to the throne for years and years. The death of his mother, however, has propelled him into the position to take his mother’s place. However, the trip back to Tomoda’s capital, in a world where the Tomodonese have been humbled and continue to be humbled by the powers they once dominated, is a fraught one. Not everyone wants to see Jimuro to make it to his coronation, or have their own agendas for him before he gets there. His journey to that throne and the other characters around them, and the conflicts they engender with each other, and outside forces (including the novel’s main antagonist, the less said about the better for spoilery reasons) is the meat and drink of the novel.

And so the other characters in the novel, viewpoint and non viewpoint alike are arrayed in relationships with him and his quest.  Jimuro’s quest touches them all, affects them all, and as he even strives to figure out what is right and good to do, his fellow characters struggle with conflict, self doubt, growth, change, and painful truths.

So this novel, for all of its high concept with Pokemon in a secondary world fantasy war torn world, this novel is all about relationships, and even more sharply, all about complex sibling relationships. Take Sergeant Tala, for instance. Sergeant Tala is part of the unit that is escorting Jimuro back to Tomoda. She is indeed a shadepacter  but she is unusual, transgressive in two respects. Almost unprecedented in such pacting, she has managed to pact to two separate “animals.”. The really transgressive part, however, is the fact that one of them is her own brother. The Tala-Dimangan (or Mang) relationship is well developed, poignant, and has a touching arc from a flashback to how this occurred, through the meat of the novel. While regular pact creatures like her Beaky are characters with opinions, even if they don’t talk explicitly, Mang is a very different relationship. He has thoughts, opinions, and is not afraid to use them.

Or take Xiulan, 28th Princess of the House of Shang. Certainly, her relationship with Lee, a thief she rescues from death at the beginning of the book so as to employ her talents to find Jimuro (fearing he is in danger), is a fascinating one, especially as we see it develop and change and grow from both points of view (since Lee is also a viewpoint character, too). Too, Xiulan is fascinating on her own, having modeled her Li Quan job (an agent of the throne not unlike an Imperial Auditor) on a favorite novel inspector character. I found this endearing, how Xiulan modeled herself in this way. But but it is Xiulan’s relationship with her half sister Ruomei, the Second Princess, that really drives a lot of Xiulan’s actions, and it turns out, more plot of the novel that one might originally suspect. It’s an adversarial relationship, to be certain, but it is much more complicated a relationship than Xiulan herself might realize.

As far as promising what is on the gorgeous cover, the novel does deliver. Shadepacting is indeed something inspired by Pokemon, but has its own rules, guidelines and quirks all of its own. Aside from rare people like Tala, shadepacting is a one person to one animal affair, and it is an intimate and very personal bond not understood by cultures that do not engage in it (The Tomodanese, particularly, who deem it to be slavery). The nuances of shadepacting come most strongly in Lee’s arc, since she is the one character at the start of the novel without any such ability, and one of the prices she names to Xiulan to help her is to gain a shadepact of her own. That journey to her shadepacting, and how it ultimately influences the narrative, further binds the characters and their relationships together.

Fear not, though, the novel does give us the shade on shade and shade versus human conflict that you might expect and want from a Pokemon influenced novel. Shadepacted creatures are larger, tougher and stronger versions of their original selves, which means that Xiulan’s rat is much larger than a handful, and Dimangan, after his pacting, is the size of a giant. Shades are relatively hard to take down, with strong regenerative abilities, stopping the person they are bonded to, if possible, is often the most effective way to end a combat. The various shades we see throughout the novel also do have non-combat capabilities that come to the fore at various points in the narrative.

Metalpacting, the ability to manipulate metal, gets far less play in the novel, since Jimuro is the only practitioner we see in much of the narrative and he is in not much of a position to use it. There are some very neat worldbuilding bits, though, as the author explores what a world where most people could manipulate metal might mean for construction of things like doors, and automobiles. We do see some military applications, such as in the use of firearms and guns, in a way reminiscent to me of Brian McClellan’s Powder Mage universe. Shadepacting feels more like an intimate, duel like approach to warfare, something feudal, ancient and pre-modern. Contests of champions, for conflict on a one on one scale. (And in fact formal challenges are still permitted in Shang). Metalpacting feels more industrial and more oriented to war on the scale of armies.

There are a couple of nits I have in the novel. One secondary (non viewpoint) character, Kosuke, who has ties to Jimuro isn’t as fleshed out as much as he might be and there are incompletely developed or utilized aspects of that character as well, which is a bit disappointing. The quartet of four main characters are so strong that oftentimes characters around them do not feel as well fleshed out as they might. Kosuke is the weakest in this regard.

Most of all, though, it is highly entertaining novel. It’s a complete story that while I could see further novels set in the world, the story here is tied off relatively neatly and the reader gets a complete reading experience in one volume.  Steel Crow Saga is a secondary world fantasy novel influenced by Pokemon novel that alternates its strong characters beats with shade combats, it alternates its cultural explorations of food, and societies with thoughts on war, the aftermath of war, colonial and post colonial narratives. There is much here not to say about the novel, to invite the reader to discover for themselves the richness of the narrative and the characters. I heartily recommend readers at all interested in secondary world fantasies to do so.

Bonuses: +1 for really well thought out worldbuilding, +1 for an interesting quartet of viewpoint characters

Penalties: -1 for some secondary character problems.