Microreview [book]: Carved from Stone and Dream, by T. Frohock

Carved from Stone and Dream continues the trilogy of novels started with Where Oblivion Lives, and shows the range, stylistic invention, and writing expertise of author T Frohock. 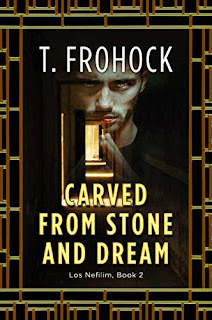 In three novellas, and in Where Oblivion Lives, author T Frohock introduced us to the story of the Los Nefilim. Caught between Angels and Demons, these supernatural beings, riven by fault lines of conflict within their ranks, have been dealing with the stirrings of the first notes of the Spanish Civil War and subsequent rise of Phalangism (Franco-style Fascism) within their home country of Spain.  Furthermore, the Second World War is on the horizon, a threat not lost on a race of beings whose souls are born and again across the centuries. They know the melodies and notes of history, even as some of them might seek to steer it for their own ends and desires.

In Carved from Stone and Dream, Frohock skips ahead in time, and puts us in the aftermath of the Francoists coming to power. Thousands are fleeing the new regime across the Pyrenees, Nefilim who supported the Republicans included. It is that flight, and what that flight uncovers that drives the plotting of the novel. Frohock uses the real life plight of those fleeing from Francoist Spain as her basis for the Nefilim’s own internal struggles. At the same time, in a time and place, today, where refugees fleeing conflict and terrible conditions around the world are being met with suspicion, fear, hatred or even closed doors, this makes the novel uncomfortably and undeniably timely. Where Oblivion Lives was amazing in its period detail and richness of historical fantasy setting, Carved from Stone and Dream takes that and makes it even more relevant to today.

The novel’s strengths, as always are on the characters, their motivations, actions, and how that drives the narrative. Frohock’s work has always been character driven. Even in the middle of a Francoist rising, what really matters, and what really sets people down paths, sometimes colliding paths, is their own internal drives. Be it the drive to protect and save loved ones from ruin and disaster at the hands of the dark forces rising in Spain and elsewhere, or the drive for power, or even the drive for freedom and revenge, the novel makes choices matter, actions consequential, and  bonds of family and relationships central. Miquel, Diago and their son Rafael, as well as characters like Guillermo (head of the angelic Los Nefilim) and Jordi (Guillermo’s rival and brother, and the main antagonist of the novel) go through pain and effort, physically and mentally as they strive and struggle.

Frohock really knows her history, but keeps her historical fantasy strictly within defined bounds. In a way it could be seen as a secret history, none of the events and the fictional characters do not visibly change the actual historical events and setting. She uses the matrix of the real history of this conflict, tragedy and human crisis, one that is not as well or widely known as it should be, and weaves her fictional narrative in the interstices in a skilled fashion. She doesn’t cheat, either and make the darker Nefilim the reason and ultimate power behind the Francoists. Those human villains and what they do are our own fault, not pawned off as being the pawns of others. The darker Nefilim DO seem to influence Franco and company, but they are not ultimately responsible for them.

Readers of the previous work will be surprised by the change up in some aspects of the novel. While there is plenty here that is familiar, the characters, the character focused plotting, and the relationships, the more high level of seen and used magic definitely is new. Relatively small amounts of overt magic, above and beyond who and what the Nefilim *are* has been something that the previous novel, and the novellas, have employed rather sparingly. In Carved from Stone and Dream, however, Frohock changes things up in a radical way. Right from the get go, we get to see a lot more high magic used by all sides of the conflict. It is indeed as if in a civil war, you start pulling out the big guns, and the high level of magic used definitely was something new to me in Frohock’s writing. I think she keeps her usual character based focused and doesn’t allow the magic to dominate the narrative, but it definitely has a strong impact on events. The major set piece location is a fictional fortress set in a pocket dimension built into the Pyrenees mountains between France and Spain. All roads eventually bring most of the characters into contact with this place, and there are secrets even to this pocket dimension that amp up the magical quotient of the novel further. It did take some getting used to in order to really appreciate, but I value when an author grows and stretches her wings and tries new and interesting things.

The writing in this novel remains rich, evocative, powerful and poignant. On a line by line reading, the novel is a dark tapestry of language, phrase and word choice to discover, the author’s style distinct and very well developed. All of the characterization and worldbuilding really are brought to a keen shine in the author’s skilled hands. Even as Frohock tries new things, the quality of the writing remains high.

The thing to keep in mind about the novel, in addition to the usual that you probably don’t want to start here (You can start with Where Oblivion Lives, although the three Los Nefilim novellas really more effectively introduce the world and concepts and characters, but the author does provide spoiler free synopses at the beginning of the book), is the darkness of the novel. This is not an easy book to read. There are a few dark elements in the aforementioned novellas, but in terms of being dark and sometimes very hard to read in a squeamish mode, Carved from Stone and Dream definitely may not be for all readers. It’s an essential book, I think, in this day and age when we are building walls instead of bridges, and shunning and fearing strangers instead of welcoming them to our tables. But it is not an easy book to read. The period detail on how the French treated refugees from Francoist Spain is all accurate, it’s all historical, and it is more than uncomfortable to read. And the main driver of the plot, and what is going on inside of the fortress in the pocket dimension is pretty tough to take as well. This is most definitely not a light and nice book, and I myself needed a palate cleanser afterwards. The movie parallel to this novel is an obvious one on a number of levels- Pan’s Labyrinth.

For all of that, it is excellently written (Frohock’s best work to date), potent, powerful, and memorable. The list of source inspirations at the back of the book alone is worth the price of admission to those who want to know more about these dark events and how the author has woven them into their fantasy narrative.

Bonuses: +1 for strong character focused historical fantasy chops
+1 for being willing to shift gears in tone and style

Penalties: -1 Darkness of the narrative may not suit all readers.