Welcome back to my Dragon Prince re-read! We've come to the end. Skybowl is the concluding volume to Melanie Rawn's Dragon Star trilogy, which is ultimately the culmination of six novels worth of worldbuilding and storytelling. As always, I maintain the story arcs across all six novels more accurately complete a single trilogy with a much more unified story than one might otherwise expect. I go into a little bit more detail about that in my write-up of Stronghold, if anyone is inclined for a refresher.

When I wrote about The Dragon Token, I noted that it was the one entry in this reading series where I've moved from a re-read to a straight up first time reading because nothing in that novel was familiar. We are back on familiar ground with Skybowl as this is a novel I've actually read - though not nearly as many times as the three Dragon Prince novels or even Stronghold. 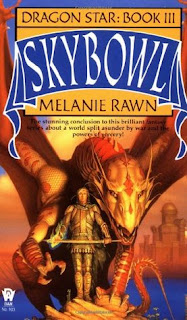 I had forgotten how Skybowl ends. I remembered the death of Meiglan and that of the High Warlord, but I did not remember the aftermath. I didn't remember that Andry died, and definitely did not remember that he died from putting too much of himself into a major weaving of sunlight and, in the end, lost himself to that sunlight.

I never thought I'd cry for Andry. He was never my favorite character. When I wrote about Sunrunner's Fire I remembered "the sweet boy who loved his brothers so much it hurt in The Star Scroll" and somewhat lamented how that boy was gone, buried under the pressure of being the new Lord of Goddess Keep and consumed by his unwavering belief that his visions of the future were absolutely correct and justified any course of action he might undertake, no matter how murderous. It was so very sad to watch and his growth into Pol's main antagonist has been difficult. He's not the most pleasant of characters to read - though his visions have ultimately been proven correct, as noted by the existence of the Dragon Star trilogy (this does not mean that all of his murder or tightening up the religious aspects of Goddess Keep were even remotely correct, of course).

Andy is a difficult character to love and even though I can't remember his death the first time I read Skybowl, I feel reasonably certain I never cried for him. The thing is, and this is the thing about so much in literature these days, I'm the father of two small children and any sort of parental grief is a novel is just too damned difficult for me. Watching Tobin have to let another son go, her third - another child, no matter how grown Andry was, no matter how powerful - it's too much. I had to look away from the book. Seeing Chay there at the end, when Andy finally lets go into the sunlight...I'm glad that I finished Skybowl at home because I ugly cried as Tobin and Chay lost another son. It's not Rohan. It's not Sioned.  It's watching a parent lose a child. I just can't.

There is a song from Tori Amos on her To Venus and Back double album, "Cooling". It's a live track, and it must have been one of the songs she used to close shows with because she introduces the song by saying "and this is sort of my goodbye to you". There's not even an indirect link that I can make between Skybowl and "Cooling", except that the song (and that intro) ran through my head a number of times reading Skybowl. It was the knowledge that this was the end of Melanie Rawn's Dragon Prince. Rohan was dead. Sioned was soon to be dead. The war was going to end and it was going to be time to say goodbye and even though this re-read has reminded me that I don't love the Dragon Star novels nearly as much as I do the Dragon Prince books (three volumes of near ceaseless brutal war which costs the lives of so many and breaks the rest, can't imagine why), it's bittersweet. Rawn offers tantalizing hints as to the futures of various characters (Sionell's son Meig, for one) and even though I'm not done with this world, Melanie Rawn is. So this is goodbye.

So much of Skybowl feels like a chase to rescue Meiglan from the High Warlord and the Vellant'im. He wants her, we only half understand why until it is clear that he plans to sacrifice her to crush the High Prince and break the power of the dragons. It's a little convoluted, but it becomes clear that the reason for this plan is superstition and the altered dragon books Sioned had left behind to confuse the Vellant'im and to not let them know the secrets of the land. Unfortunately, one of those alterations had to do with virgin sacrifice and even though Meiglan is a) married and b) a mother - she's a mother of girls and apparently that doesn't count for the Vellant'im, so sacrifice it is.

Rawn wraps the story in her usual multi-pronged storytelling, but there is a relentless drive to get back to Meiglan - for Pol to save her somehow (when he's not obsessing over Sionell, being an ass,  and feeling guilty about it) - she's the centerpiece of this story. It doesn't end well.

As much as I love Dragon Prince, I think what I most loved about these novels is the early interplay of Rohan and Sioned and building the dream of peace. Skybowl, perhaps more than Stronghold or The Dragon Token, was more of a slog (though at least Sioned here is an active character again). I'm generally a fast reader and I was a long time reading Skybowl, and not because I didn't want it to end or to truly say goodbye - though there was a certain element to that. Even though I don't love Pol and Andry, reading the Dragon Prince novels is like slipping into comfortable socks and reading under a blanket. Despite the war with the Vellant'im, this is a pure comfort read for me. These are old friends and most of my old friends are dying - and maybe that's my biggest "problem". I'm left with the children of my friends and even though they're related, they're not the same people. I'm stretching that analogy a little farther than it can realistically go. Pol and Sionell at each others throats is not Rohan and Sioned and it's not Chay with Tobin. It's not supposed to be, and I take Dragon Star on its own merits - but one trilogy I love and the other I like.

Skybowl is the culmination of the Dragon Star trilogy, three books where Melanie Rawn seemingly set herself the goal of breaking every beautiful thing she built in Dragon Prince novels. It's rough and it is unrelenting, even granting the moments of levity and the standard statements of all the great things a Prince can do for his friends and vassals when they come through in the clutch. There was darkness and nasty moments in Dragon Prince a plenty, but Dragon Star sees that and raises it once more.

Thank you very much for coming on this journey of re-reading one of my all time favorite fantasy series with me. It was a delight to revisit some old friends and meet a few new ones along the way.