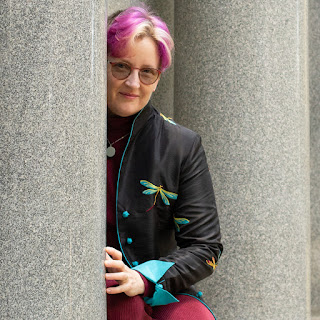 Juliette Wade never outgrew of the habit of asking "why" about everything. This path led her to study foreign languages and to complete degrees in both anthropology and linguistics. Combining these with a fascination for worldbuilding and psychology, she creates multifaceted science fiction. The author of short fiction in magazines including Analog, Clarkesworld, and Fantasy & Science Fiction, she lives in the San Francisco Bay Area with her Aussie husband and her two sons, who support and inspire her.


Today she shares her Six Books with Us...

I've just started reading Arabella of Mars by David D. Levine. I'm really enjoying it, especially the way that he grounds the setting in his use of language. He mixes the linguistic flavors of British Empire, steampunk, and science fiction wonderfully.

I'm looking forward to The Worst of All Possible Worlds by Alex White, the conclusion to their series that began with A Big Ship at the Edge of the Universe. I think they've done something really cool with the mash-up of space opera and magic, but the really outstanding thing about the series, to me, is the characters. I'm a particular fan of Boots, Nilah, and Orna. I'm keen to see how Alex ties this all up in a magnificent space-magical bow.

I found myself talking at a holiday party this year about Ancillary Justice by Ann Leckie. I love that book because it satisfies both intellectually and emotionally. The linguistic choices make me happy; the sad parts make me cry. Breq is the kind of nuanced character I just love. (Now I want to go pick it up.)

I have found it fascinating, as I have become a writer, how my engagement with this field has changed my impressions of the books I read. I don't think it's fair to say that my impressions changed negatively, but they've evolved. It does make it harder for me to become immersed rather than read analytically. For example, when I first read Lord Valentine's Castle by Robert Silverberg when I was fifteen, I was totally captivated by it. When I went back and read it years later, I found I still appreciated its grand scope, but I had a great many critiques of the social worldbuilding, and I wished I could feel closer to the characters. I'm really glad when I can go back and do a critical reading, because such readings give me a ton of ideas for tuning my own work.

I was in college when I first read The Left Hand of Darkness by Ursula K. LeGuin. Since then, I've read it at least five times. I find new things in it every time. It has blown my mind in so many ways, and really inspired me to challenge worldbuilding elements that I had always taken for granted. I really love the way the book uses both researcher and character points of view. It's one of the works that really got me to pay close attention to the kinds of drive and conflict that point of view changes can create.

Mazes of Power, my debut novel of sociological science fiction, which came out yesterday on February 4th, 2020. This is a book about a power struggle in an underground city, and two brothers who end up being thrown into a competition for Heir to the throne. It deals with compulsion, contagion, assassins, sexual politics and forbidden loves. It examines how human characters cope with technology and change, and reflects on social issues from our own world by examining them in the twisted mirror of a unique caste society in decline.