In The Poet King, Ilana C Myer sticks the landing, in completing the Harp and the Blade trilogy, a poetical and lyrically rich fantasy of the tumultuous return of magic to a fantasy land, and the poet central to the mythically infused events. 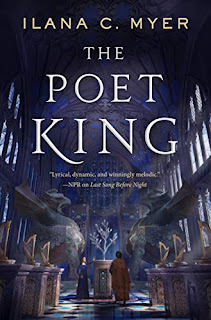 In Last Song Before Night and Fire Dance, Ilana C Myer introduced us to the realm of Tamryllin, a fantasy land where poets hold cultural and sometimes temporal power, and introduced us to Lin Amairstoth, a young would-be poet. Caught up in events, Lin not only was witness and participant in the unexpected return of real magic to Tamyrllin, but, in Fire Dance,  also political events in the neighboring realm of Kahishi. Also in Fire Dance, we were introduced to more characters, coming into their own in the now magic-returned realm, including would be poet Julien Imara.

In The Poet King, the titular character sets Tamryllin, and the world, on a mythic course that might yet destroy the land, instead of bringing him the power he seeks. The story of The Poet King is the struggle of Elissan Diar, the aforementioned Poet King (who rose to a position to take that power during Fire Dance), Julien and Lin as iconic, magical forces rise and soon start dictating the course of events, themselves. For the White Queen, she of Ice and snow, frost and rime, and the Shadow King, lord of Castles, seek to renew their long conflict...right on the lands of Tamyrllin and Kahishi.

As always, the strongest aspect of Myer’s writing is the line by line poetry and beautifully infused and evocative writing of the characters, landscapes and narrative. This is a book where word choice is important, and finely tuned to immerse and make the reader feel. Be it the glacial coldness of the White Queen, or the danger of the Shadow King’s Castle, or the struggles of Julien Imara in a puzzling otherworld, or the casual cruelty and power of Elissan Diar, this is a book whose language is meant and aimed at making one feel. And as in the previous two novels, Myer succeeds. What drew me through the novel, first and foremost, was the language.

Like in Fire Dance, The Poet King also surprised me with the plotting. Myer’s work is not a straightforward and simple progression, predictable events one after the other in a daisy chain. After Lin’s adventures in Kahishi, I wasn’t quite sure how and what the author would do to bring the narrative to a close, but now I can see and do see the entire shape of the trilogy. This is a novel, a trilogy about the return of magic to a realm long denied without it, and the consequences and unintended results of that. Myer takes the tack of having mythic forces become unleashed by the return of magic (from the end of Last Song Before Night) and uses the fact that a realm that has long been without magic is not as prepared for such beings and forces as they might think. The story of this novel is coming to grips with that, and dealing with the Law of Unintended Consequences.

So what The Poet King and the whole series seems to be, to me, is a story about the return of magic to a world without it, and the consequences, challenges and dangers of such an act. The return of magic is a story that is sometimes seen in set on Earth-based Urban fantasy novels. The Magic Goes Away is a story that is older than Tolkien and Middle Earth. Julie Czerneda’s The Gossamer Mage depicts a realm where magic is really just resident in one small realm, and the dangerous consequences of that. But a secondary world fantasy realm, that starts off relatively mundane and regains its magic, and finds it is a mixed blessing indeed is a much less common story, and Myer completes and capstones that story here expertly.

The Poet King effectively and decisively ends the story of Lin Amairstoth and her land of Tamryllin. The promise and aspirations going all the way back to the first chapter of Last Song Before Night comes to fruition in this novel. Poetry, song, the return of magic, for good and for ill, and mythic threat and promise all come to a crashing head and conclusion in the finale. It strongly reminds me of Guy Gavriel Kay’s Fionavar series, and I daresay fans of the latter should definitely discover the poetry and magic that Myer creates in her own (hopefully first of many) series. I look forward to where Myer goes from here as an author, and I urge you, reader, to pick up Last Song Before Night and discover her writing for yourself.

Bonuses: +1 for poetic, excellent line by line writing, +1 Strong use of story and theme to tell a tale not often told

Penalties: -1 for a little roughness in getting started in the beginning, especially for readers who have not recently read Fire Dance