Myke Cole's first novel, Control Point, was published in 2012, he's been putting out approximately a book a year since, alongside including short fiction, non-fiction, and even starring in television shows. If you enjoy Military Fantasy or Epic Fantasy (and now, with Sixteenth Watch, Military Science Fiction), Cole is an author you should check out. A veteran himself, Cole intimately understands the choices that soldiers make, and the long term consequences of those choices. He did three tours in Iraq and was recalled to serve during the Deepwater Horizon oil spill. His work includes the Shadow Ops trilogy, the Reawakening trilogy, and the Sacred Throne series, and his short fiction has appeared in Black Gate, Weird Tales, and multiple anthologies.

Angry Robot is publishing Myke Cole's forthcoming novel Sixteenth Watch (available March 10), in which the Coast Guard must prevent a lunar war. This book promises to be low G and high intensity!

I was lucky enough to see Myke at ConFusion science fiction convention many years ago, and I remember him being funny, humble, razor sharp, and an absolute stand up guy. He's super busy these days, so I was thrilled that he found time to answer all my questions about Sixteenth Watch, writing about middle aged characters, being on TV, writing non-fiction and comics, and more!

You can learn more about Myke and his work by checking out his website, MykeCole.com , or following him on twitter, @MykeCole. 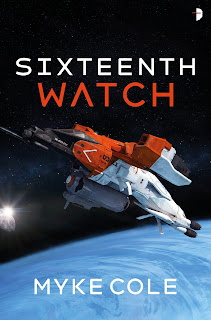 NOAF: I love that the plot of Sixteenth Watch focuses around de-escalating a possible war. Your characters are trying to avoid a war by stopping it before it starts. Why did you want to tell that particular story?


Myke Cole: Military SF is a tried and true sub genre. It has a solid and reliable fan base that has a set of expectations that military stories will be about the military’s core function - to kill people and destroy property. While that is most certainly at the heart of what militaries do, it is only one of the things they do. Militaries do search-and-rescue, further diplomacy, provide aid, build infrastructure, develop new technologies and processes, and even influence pop culture. I’ve read a lot of Military SF, and I’ve been feeling for a while that these other aspects of militaries aren’t sufficiently explored, and the US Coast Guard, a military branch dedicated first and foremost to saving lives rather than taking them, was the perfect branch to do the exploring.

NOAF: The main character of Sixteenth Watch, Cdr. Jane Oliver, she's in her 50s, she's counting down the time to when she can retire. How did you develop her character?

MC: Although it’s easy to forget since 2016 when this country has been saddled with a corrupt gerontocracy, America is a country that hates old age and lifts up youth at every turn. Older people are expected to disappear, or at least fade socially, to shut down their ambition, sexuality, and vitality. I didn’t realize how much that culture that impacted me until I crossed the line to where I’m closer to 50 than 40. It’s only as I become more interested in stories about people dealing with the second half of their lives that I realize how few stories are told about them, and in particular how few stories that deal honestly with the fact that while our bodies wither, our humanity doesn’t, and we have to grapple with the frustration of a heart that wants to write checks the body can’t cash.

NOAF: One challenge to writing Military Science Fiction and Military Fantasy is that not all readers will be familiar with military terminology and acronyms. What is common knowledge to active military members and veterans may be opaque to readers with no military experience. How have you handled this challenge?

MC: I have to thank my agent for this. When I was first doing my military fantasy Shadow Ops trilogy, I used military argot to the hilt. I used every acronym that I would normally, expecting my readers to pick things up by context. My agent read it and said “Dude. Take all that shit out.” And I was horrified. “But it’s authentic!” I cried, “it will transport the reader and make them feel like they’re really experiencing a military environment!” “Hell, no it won’t,” he said, “it’ll confuse them and throw them out of the story. Trust me, this book is so military, they can’t fill to pick up on that. Your first goal should be to make the book accessible to people who lack that first-hand experience. Put a glossary in the back if you want, but for the love of god, make another pass and take out 80% of these acronyms.”

It was hard advice to accept, but I’m glad I did. Because he was right. 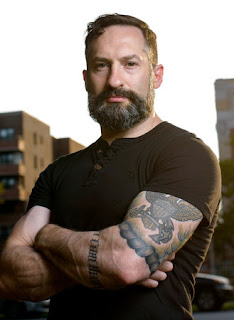 NOAF: How did you come up with the title Sixteenth Watch? Is the number 16 significant?

MC: Astronauts in the International Space Station (ISS) see sixteen sunrises and sunsets every day. In my fictional universe because of this, getting assigned to the ISS became called “going on the Sixteenth Watch.” Eventually, the term “Sixteenth Watch” became used by all branches of the military as slang to mean “any duty in space.”

NOAF: What was your favorite scene to write in Sixteenth Watch?

MC: I can’t answer this without giving major spoilers. Sorry. Suffice to say it’s a conversation between Jane Oliver and the Commandant of the US Coast Guard, a conversation that Jane (and hopefully the reader) expects to go one way, and takes a delightful left turn that, if I did my job right, will evoke a tear or two.

NOAF: As I was writing these interview questions, you posted on twitter that The Bronze Lie is done". What can you tell us about The Bronze Lie?  On a related note, of course I need you tell us everything you can about Hundred Wolves from Vault Comics!

MC:  The Bronze Lie: Shattering the Myth of Spartan Warrior Supremacy is my second history book. It takes Sparta’s complete military history and compares it to their mythic status as the biggest badasses in military history and asks the question “were the Spartans really so tough?” It’s essentially a book-length version of the argument I made in an article for The New Republic that came out last year. You can read it here.

Hundred Wolves is my comics debut. I wrote the script of issue 1 and a synopsis for the whole story arc years ago, and pitched it around unsuccessfully. But then I got incredibly lucky when I pitched it to the legendary artist Tony Akins (he did Wonder Woman, Hellblazers, and Fables, among other projects). It just so happened that he’s into the same period of history that I am (17th C. Eastern Europe) and jumped on the opportunity. With him on board, I was able to sell it immediately, and it’ll come out from Vault Comics in April.

The comic is set in the 17th C. in the lawless borderlands between the Holy Roman Empire and the Ottoman Empire. It’s about two Cossacks - Andrei and Oksana - steel-eyed killers who made their living raiding with the Cossack band Hundred Wolves. They eventually gave up the raiding life to raise their daughter Yulia on a farm given to them by the Polish Count Ostoja in return for service. They looked forward to farming and raising their little girl in peace, but the old life won’t let them go. The Hundred Wolves still have need of their bloody-handed skills, and their new liege lord also knows their reputation as killers and badly wants to put them to use. I was really inspired by the badass family story in Saga and worked hard to channel it in this period piece. 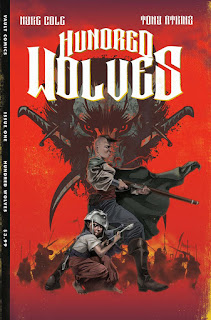 NOAF: You write novels, series, novellas, short stories, and now comics. When you get an idea for a story do you know right away that it is novella length, or too long to fit into one novel? How do you determine the scale of the story and world that you are building?

MC: This is a great question and I’m afraid I don‘t have a ready answer. I have my idea and I begin by sketching it out as a 3-5 page treatment. Based on the feedback I get on that, I decided whether the idea is good enough to merit expansion into an outline (usually around 100 pages), and if that cuts the mustard, then we go for whatever the final form will be (novel, novella, comic script). But as for what its final form will be . . . honestly the story itself will dictate that to me and it comes clear only as I work on the project. Currently I have one really good idea I want to get to once I complete work on the comic (and the sequel for Sixteenth Watch . . . and the bibliography, maps and illustrations references I owe for The Bronze Lie), and I still haven’t decided it it’ll work better as a comic or a novel yet. I will say that my experience doing novellas with Tor.com was so positive that I would be inclined to cut a longer work down if it meant I could publish with them again.

NOAF: You're also on TV! While us viewers only see the polished, edited version, you literally get to see what happens behind the scenes. Any funny or surprising stories from your experiences filming the Contact and Hunted TV shows? Is television something you hope to do more of?

MC: I love doing TV. For one thing, I love attention. I used to think of this as a character flaw (we’re all raised to be self-effacing and taught that seeking the spotlight is a sign of egomania), but I’ve come to accept that for better or worse, it’s who I am. TV is so much easier than writing. It’s grueling work (12-15 days when you’re shooting), but it’s compressed into a tight period (Hunted was two month’s work. Contact was one month’s work). I get paid more to do a single TV show than I do in a year of writing, and a book takes me 1-2 years to write.

But just like writing, just because you’re doing it at a professional level is absolutely no guarantee you will get to keep doing it. I thought that starring on two major network shows and having an agent at CAA (it’s really hard to get in there) meant my TV career was set. Nothing could be farther from the truth. The only real benefit of having done two shows is that I now have a gorgeous, professional “reel” (clips of me on TV) that I can show to other shows I am trying to get to book me. Otherwise, I’m basically at square one. So, I’m currently hustling for my next show and there’s no guarantee that I’ll get it.

It’s a lot like writing, to be honest. When The Bronze Lie comes out, I’ll have published twelve books all with major publishers. It means nothing. There is no guarantee I’ll sell my next one, and I have to work just as hard to make sure that what I am producing is punching at a level where it stands a real shot of being picked up by the majors.