Carrie Fisher passed away yesterday, December 27, drowned in moonlight and strangled by her own bra. At least, that's how she wanted it described. She was 60 years old. 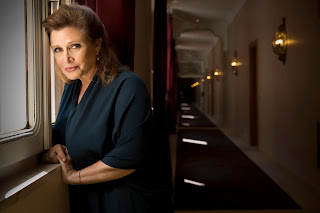 For most people, portraying an iconic role like Leia would be enough. One would be hard pressed to find anyone who would group her in with "most people". She said that she didn't want life to imitate art, she wanted her life to be art. The tapestry she wove with her life is truly unparalleled.

Listing her accomplishments would be far too simplistic, but describing all she was is practically impossible. Beyond her achievements on screen and with a pen, she was forthright and outspoken, open and honest about her own addictions, about being bipolar. She gave many people courage to cope with, and speak out about, their own issues.

I can't speak to everything she did, or all the lives she touched, but for me, she was always s real. She never made any bones about her imperfections, obstacles or flaws. But she also never tolerated other people making anything into flaws, shutting down discussions about her weight, looks, and aging with mere sentences. Nor did she let a character, even one as outstanding as Leia, define her. We will remember often as that character, watch her over and over as that character, but it not define her, because her life did not imitate her art.

Her life was art. We were privileged to observe some of it.