Microreview [book]: The Hero of Ages by Brandon Sanderson (Mistborn #3) 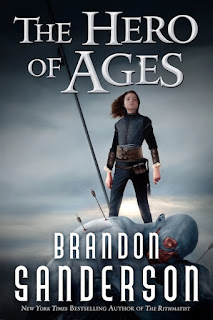 Naturally, this review contains general plot spoilers for the previous Mistborn novels, The Well of Ascension  and The Final Empire.


Luthadel has been saved, but much loss occurred, including some central (but not so pivotal it makes you really sad) members of the crew. Vin found the Well of Ascension and released the power within, an act that was a result of her choosing not to keep the power for herself and save Elend’s life, but it turned out to all be a ruse perpetuated by Ruin (the bad force) to allow himself to be set free on the world. But don’t get too excited, Elend isn’t dead. Preservation (the good force) provided him with a magic pill that transformed him into a mistborn and thus gave him superior healing powers. Sazed, as per usual, rocked socks and selflessly saved Vin's backside. Now, in the final installment of this Mistborn trilogy, Empress Vin and Emperor Elend, along with the remaining crew members and the Empire’s army, are on a search for treasure coves created by the Lord Ruler, who knew that one day Ruin would return, to help the population survive the impeding apocalypse,.

Okay, so Elend is a mistborn now, which is pretty much unnecessary. Of course (eye roll) his powers are superior to Vin’s, but he’s not as good at using them. He fights a little bit, but primarily uses his new power to cower those he is about to conquer and to control the Koloss enough to add them to his army. And as a result of the Emperor’s good fortune, we still have the Velend (Vin + Elend = annoying) though it is not quite as bad as before because now Vin spends a lot more of her time thinking about saving the world and a lot less thinking about Elend. But their interactions are still forced, unromantic, and unbelievable. There is one scene in the beginning where they are “fighting” but it’s all done very calmly. However, everyone knows that a romantic couple under tense stress (like trying saving the world) does not fight in a calm and rational manner, because passion flows on both ends of the spectrum. Part way through the book the Velend attends a ball, and all the memories from The Final Empire come rushing back and we get a hint of the old Elend and it’s pretty satisfying. I wish Sanderson would have kept that guy around.

Sazed, my favorite character from The Well of Ascension is going through an existential crisis in this book, and he spends all of his time brooding which makes him unfun to read. We do, however, get Spook, who from his first line in his first chapter easily became my new favorite character. There was always something special about Spook in previous installments and here he really shines. His story line is engaging and exciting and I found myself looking forward to his chapters most of all. Breeze and Ham are both fantastic secondary characters, as they have been through the whole series, though I miss their interaction, which is scant following the first book. And I can’t forget TenSoon, dear TenSoon, one of the greatest characters in this whole series.

The Well of Ascension furthered the magic building, but The Hero of Ages really ties it all together, leaving no questions unanswered. Which brings me to the end. Everything that annoyed me about the last two books in this series was forgiven at the end, which was beautiful and surprising and perfect in every way.

So, is this ‘must read’ series really a must read? The first book, yes. Like I said previously, Mistborn, The Final Empire is the heroic fantasy of this generation, putting a grim twist on the familiar subgenre. But the subsequent novels have a hard time living up to their predecessor, and I thank the gods for inventing the trilogy, because I don’t think I could have taken the Velend any further. I am excited though to try the other books in this Mistborn world to see if maybe it’s just Elend that brought the series down for me.

Negatives: -1 for the Velend, -1 for Sazed not getting his ish together sooner

Nerd Coefficient: 7/10 pretty good, but pales in comparison to the first in the series