The heroic fantasy of this generation. 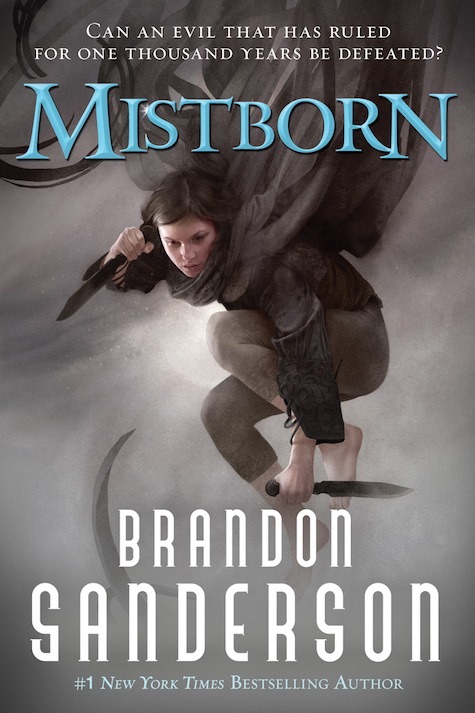 This generation of fantasy can be characterized in one word: grit. We can argue over the definition of that word and ones like it, but to me it involves less than beautiful worlds, unconventional heroes that walk the moral line, and humanized villains – when heroes and villains are even distinguishable. Some books distinctive to this generation of fantasy include Joe Abercrombie’s First Law trilogy, GRRM’s A Song of Ice and Fire, and Stephen Erikson’s Malazan Book of the Fallen. But what we don’t have in this list is a good old fashioned hero’s tale. Enter Mistborn.

Mistborn is the story of a young street urchin named Vin, one of the lowborn Skaa oppressed by the Lord Ruler. She is recruited by an elite band of ‘thieves’ for her unique but undeveloped powers. Led by the legendary Survivor of Hathsin, this group of mistings (wielders of magical power) are planning more than a typical heist… they’re planning a revolution. Vin learns to hone her powers under the tutelage of Kelsier (the aforementioned Survivor of Hathsin) and also finds herself in the process. This is very much a coming of age story. Tor is currently re-branding it as YA, which it is, but that doesn’t mean it’s not appealing to an older audience as well - as evidenced by its success marketed to such thus far.

So why is Mistborn the heroic fantasy of the generation? Well, we have all the classic necessary tropes for a hero’s tale: young, lowborn protagonist with undeveloped powers; mentor; love interest; bad guy to fight. What makes it different, or rather, indicative of the current grit movement? The world is dark and literally covered in ash. Our heroes are a band of thieves, scheming and killing remorselessly to get ahead (Vin included). Kelsier, Vin’s mentor and leader of the revolution, is tortured and has his own agenda. Vin hides in the shadows. Our villain is made human and relatable through the discovery of a log book (or diary) believed to have belonged to him.

But at its heart, Mistborn is a heroic fantasy and the characters are not morally ambiguous. It is obvious who the good guys are, even if their means to the end are not always reputable. And Vin is far from an anti-hero; she is kind, courageous, and good-hearted. She starts out this story as a troubled little girl and grows into a brave and powerful young woman. And most importantly (albeit somewhat unrealistically), Vin has the support of those around her. No one is jealous of her powers or plots against her. Surprisingly, when she falls in love, no one tries to make her out to be weak or a fool for it.

I take notes as I read a book that I am going to review, recording my thoughts and impressions in the moment. For Mistborn, I wrote: maps are hard to read. That's it. I said before that you know a good book when you can just read it and enjoy it, without feeling the need to break it down critically. This was my Mistborn reading experience. I just sat and read it, ceaselessly, and thoroughly enjoyed every second.

I do have one complaint though. (A legitimate one, not about the maps.) There is a scene at the end where Vin is sitting on a roof looking down through a skylight. She has to make the choice to jump down into the room or walk away. I wish she would have chose differently.

Bonuses: +1 for giving us a good female hero, +1 for not having the guys make Vin feel foolish for falling in love

Negatives: -1 for Vin's choice at the end

Nerd Coefficient: 9/10 "very high quality/standout in its category"
----
POSTED BY: Tia   Nerds of a Feather contributor since 2014