Black Wolves is as epic as epic fantasy gets. 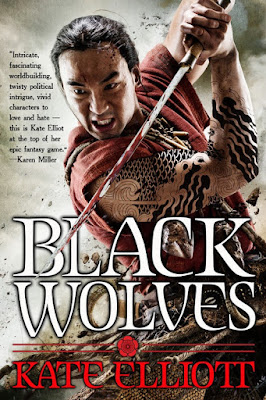 There are not too many novels which cause you to pause while reading and marvel in baffled awe at what you just read, but Black Wolves is one of them. The body count is high, but it isn't just Kate Elliott's willingness to kill off characters you think are going to be more prominent which causes some of this awe; it is that Elliott continually flips the reader's expectations as to exactly what is going on and what the direction of the actually is. We know nothing and we are better for it.

Black Wolves is a sprawling novel centered in one relatively small part of the world. It spans generations, but somehow feels tight, intimate, and immediate. The novel ties tightly to the ruling family, but the story is so much larger than "simply" being about a small group of elites. There is nothing simple about Black Wolves or Kate Elliott's storytelling.

Black Wolves is an epic fantasy that despite the appearances of focusing on who rules the land known as The Hundred, is not really about that. There are plots and schemes a-plenty and the body count is remarkable in its scope, but the immediacy of the squabbling and murdering over thrones feels slightly small in the face of the larger world because every time readers think they have it figured out, Elliott pulls back the curtain a little farther.

Early in the novel readers are presented with a king who conquered and brought peace to The Hundred earlier in his life by destroying the Demons who were plaguing the land. Widen the image, and were the "demons" truly terrorizing The Hundred?

"It's easy for a young man like you to forget that sixty years ago demons destroyed the peace of the Hundred. Villages burned. Children abused. Adults barbarously murdered, on enslaved into unspeakably brutal servitude. People starving. All of it enforced by demons' monstrous ability to rip into your very thoughts and compel you to obey them." - pg 122


The thing is, we are seeing this story from the eyes of the victors, from the eyes of the invaders. As the frame continues to widen and we see more of the landscape, we begin to wonder. We question, just as particular characters begin to question. Perhaps the demons were, but is that all there is to the story?

This is as good a point as any to note that Black Wolves is the beginning novel in a new trilogy, but that it is also set in the same world as Elliott's Crossroads Trilogy (Spirit Gate, Shadow's Gate, Traitor's Gate) and it is certainly possible that the answers to some of these questions can be found in that earlier trilogy. I can't be sure. It is also a perfect time to note that at no point is reading that earlier trilogy necessary to understand anything that happens in Black Wolves. This novel stands alone and though I haven't read Elliott's Crossroads novels, I don't feel that I have missed anything vital to understanding or appreciating Black Wolves. With that said, after reading Black Wolves, now I want to go back and read Spirit Gate.

After introducing the rough outline of The Hundred and introduces the reader to characters we're pretty sure are going to be the protagonists not only of this book, but the full trilogy, Elliott jumps forward 44 years and one of those for-sure-going-to-be-the-protagonists is dead and the other is now a seventy three year old man (though, still quite the bad ass). Kate Elliott continually subverts the reader's expectations for what sort of epic fantasy Black Wolves is going to be.

So, what sort of epic fantasy is Black Wolves?

Kate Elliott has an answer.

"I poured all my love for epic fantasy into this story, and wrote the kind of story I want to read with a huge range of human experience, politics, magic, war, adventure, love, and loss. I wrote plenty of male characters of course but just as many women whose actions and choices drive the plot. I wanted to write a protagonist who is a snarky older woman (Dannarah) who has had enough of your shit. I wanted to write a young woman (Sarai) who uses her intelligence to forge a path for herself in a situation where most women would be portrayed as passive. I wanted to show that women can be central in epic fantasy in a range of roles, not just in traditionally “male” roles."


On the surface of the introductory chapters of the novel before the jump forward in time, Elliott sets up a particular view of The Hundred, the ruling family, and the culture surrounding it. She then spends the rest of the novel deconstructing our understanding of that worldview. We're told one thing about the Demons, but get hints as to another side of the story. We're introduced to the Ri Amarah, a persecuted minority culture and see both the insular nature of it and the prejudice against them. We see a religion taking over and ruthlessly stamping down on any dissenters, and this is done with the permission and blessing of many in power. What does all of this say about The Hundred and about the ruling family?  Questions are constantly raised in Black Wolves. Heck, with the demons, Elliott questions the very idea of memory.

But here's the thing, and I'm very happy that you're still here and reading: While there is a ridiculous amount of stuff going on in Black Wolves and Kate Elliott appears to be examining so many things that can be examined in epic fantasy (except, so far, the idea of "kitchen boy saves the world via prophecy"), all of that examining wouldn't hold weight if she wasn't also telling one kick-ass awesome story that keeps the reader engaged.

Black Wolves is fantastic and thrilling and because of just how damned good Kate Elliott is, I want to know so much more about all these characters, what happens next, what happened before, what the heck is going on with the demons (are they really just humans with magic?), why the Ri Amarah men have horns, if Dannarah and Kellas are on a collision course, how badly The Hundred is about to get overturned, what the impact of Lifka's heritage will be, and if anyone is actually going to get out of this alive? I feel like they won't.

Elliott has so much to say in Black Wolves and for all that the novel doesn't feature some sort of world threatening evil, Black Wolves is as epic as epic fantasy gets.

Bonuses: +1 for having fully mature adults as 2/3 of the protagonists, +1 for giant eagles

Penalties: -1 for what is essentially an 87 page prologue, -1 because the political intrigue does get a bit confusing

Nerd Coefficient: 8/10 "Well worth your time and attention."  See more about our scoring system here.