There's probably a "the pen is mightier" joke I could make here but I'm classier than that. 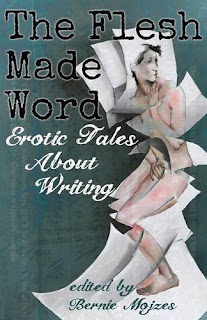 And many of the stories center on loss and longing and healing or the inability to ever fully heal. In "All the Spaces In-Between" by A.C. Wise, which kicks off the collection, features a man who tries to repair typewriters, not just of their physical problems but psychically as well, finding in them the ghosts of those who used them. And by exorcising their pain, their history, their loss, he seeks to exorcise himself as well, his drive an attempt to fill with words the hole inside him, the hole a war made in people disappeared, lives destroyed. Meanwhile, at the opposite end of the book, Sunny Moraine's "Capitalia" reveals a story of bodies and the power of writing your own story, your own identity. Because words can be prisons and words can be keys and words can fail and words can set free. It's a delightfully sensuous story about crossroads, about change, and it's an satisfying way to end the collection, a spice of rebellion and resistance and a lingering promise that words are tools and that we can wield them to tell the stories we want. And, to further highlight that fact, the collection leaves space after the last story for the reader to write something of their own, to add their voice and mark to the chorus, to the call. To engage in writing as an erotic act. It's a very nice touch, though I might be too much a book-purist to actually write something in my copy.

I'd say most of the stories in the collection tend toward the fantasy side of things, which I have absolutely no problem with. There's a great amount of second world settings with strange and richly-built societies and situations. "Paper Skin" by Sasha Payne, creates a world ravaged by war and sustained by resistance. Karl is a man whose skin can bear messages in tiny scars that fade quickly, and his story is one of despair and longing, hurt and betrayal. His world is overrun, brutally controlled, and so Karl lives for his small resistances, his moments of stolen pleasure. The setting is vivid and crushing, the story erotic and heartbreaking, Karl's heart as fragile as paper, as strong as iron. "The Prophet Scroll" by Delilah Bell builds no less intricate a world, ruled by ceremony and starring Zia, a woman with no real interest in court politics or magic until she discovers she's the Scroll, the intended mate for the Prophet, who is part leader and part spiritual figure and entirely a rather frustrated man because of the…restrictions of his office. What follows is a sexy and elaborately rendered story that mixes performance, prophecy, and pleasure.

All in all, the collection succeeds not only in capturing a truly impressive range of stories tackling the erotic act of writing, but also in demonstrating just how deep and meaningful speculative erotica can be. For readers who enjoy deep and lyric prose but are hoping for a bit more explicit eroticism than most short speculative fiction markets put out, this collection will not disappoint. For those looking for a fun and sexy read…well, that's not really what this collection sets out to do. The stories carry with them a pervasive darkness and grapple with despair and loss and emptiness. They look at what it means to write, what it means to have sex, and what it means to write about having sex.

Bonuses: +1 for a very dense collection of speculative erotica, +1 for a great range of stories and great use of the theme

Negatives: -2 for breaking my heart (numerous times!) and making me cry while reading erotica