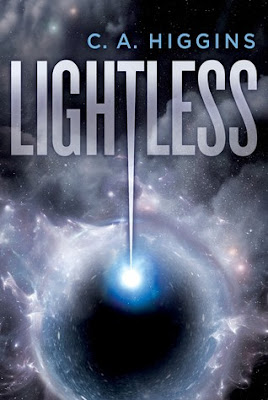 When asked in an interview with Paste Magazine about the reason each section of Lightless is introduced with a different law of thermodynamics, author C.A. Higgins notes that

If you interpret them more dramatically than perhaps you should—as, of course, I did—then chaos always increases and the universe is going to end. So how the characters and their situation evolved corresponded to the laws of thermodynamics. They start out in a position of equilibrium, and then things get more chaotic and reach maximum chaos. So the laws divide up the “acts” of the book.


Lightless opens with a highly secret military research ship being boarded by two intruders / space pirates / potential terrorists. Though they are quickly captured, it is this which upsets the equilibrium so carefully preserved by the crew of three. One of the intruders just as quickly escapes, though he is assumed dead and is out of the picture nearly from the start. The intruders are identified as having ties to the terrorist Mallt-y-Nos, though of course the remaining captive, Ivan, denies this quite vociferously.

This is where everything goes wrong. Ivan and Mattie (the two criminals in question) downloaded some sort of virus into the Ananke (the military ship in question). Did they somehow know what ship they were attacking? The rest of the novel is a quietly tight cat and mouse game as this ship's mechanic, Althea, attempts to undo the damage to the software and restore the ship to fully operational capacity. Meanwhile, an interrogator from the System (the autocratic galactic government) arrives to get the truth from Ivan. As we are repeatedly told, Ida Stays is never wrong and she knows that Ivan has ties to the Mallt-y-Nos.

While it is interesting to think on Lightless as an examination of how the laws of thermodynamics work, this would be a gross misrepresentation for what the novel is and how C.A. Higgins wrote it. This is a very accessible science fiction novel focused on character, and while there is a strong underpinning of science, Lightless is a taut novel that never leaves the ship and continually ramps up the tension as the damage to the Ananke seems to compound and makes the situation on board increasingly perilous. The single minded focus of Ida and how her interrogation is more important than anything else going on with the Ananke does not help matters.

Though Higgins focuses the novel so tightly on Althea, Ivan, and Ida, it is through the interrogation and side conversations the political and social landscape of our solar system is revealed. The Mallt-y-Nos begins to take on a bit of a romanticized vibe of the Irish Republican Army in fighting for the independence of humanity away from the oppressive governance of the System. I'm stretching the parallel a bit, but that's part of the feel. But, the Mallt-y-Nos (who is mostly only referenced in Lightless) is a terrorist who is directly responsible for the deaths of a whole lot of people and uses bombs to, theoretically, send a political message. On the other hand, the reality of life in the System is that of perpetual surveillance with no personal privacy and swift reprisals for breaking the law. True freedom, if that is something to be valued, is essentially non-existent.

As Higgins mentioned earlier, Lightless follows the path of increasing chaos and late in the novel when she describes a corpse, she is also describing the major structural shape of the novel and what she has been building towards the entire time.

"Of course, once decomposition set in, after the initial cooling of death, [redacted's] corpse would heat up again and grow chaotic, a thousand individual beings now existing where once there had been one will, one organism, one creature, one system. They would destroy the body hosting them, make it swell and stink, limbs bloating, flesh weakening and splitting, liquefying until the body was no longer recognizable as the organized system it once had been." pg 251


Lightless is excellent character driven science fiction and is a very strong debut from author C.A. Higgins. Though there is a forthcoming sequel, Supernova, Lightless succeeds at telling a complete story which can stand on its own while still leaving room for additional stories in this universe.

Bonuses: +1 for causing me to look up what the Mallt-y-Nos actually was. +1 for the dedication of Althea and the officious obnoxiousness of Ida Stays.

Penalties: -1 because I would almost prefer this to be a single volume novel rather than the first in a series / trilogy. -1 for the somewhat flat feel of the characters Domition and Gagnon