Microreview [book]: All That Outer Space Allows by Ian Sales

An alternate history of science fiction... 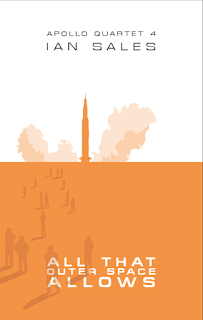 All That Outer Space Allows is the fourth and final installment in the Apollo Quartet, Sales' series of speculative novellas--each of which rests, as the name implies, on an alternate history of the U.S. Apollo program. I'm a big fan of the series, and think Adrift of the Sea of Rains and The Eye with which the Universe Beholds Itself in particular embody a science fictional ethic that is increasingly rare in this age of "exhaustion."  I found the third installment, Then Will the Great Ocean Wash Deep Above, a bit uneven in comparison--pairing, as it does, a compelling tale of female test fighter pilots facing institutional barriers to the astronaut program to an entertaining but poorly connected narrative about deep sea exploration. So I was curious to see how (or perhaps more accurately "if") Sales would tie the series together in the penultimate volume.

All That Outer Space Allows tells the story of Virginia "Ginny" Eckhardt, the fictional wife of fictional astronaut Walden Eckhadt, and a moderately well-known science fiction author. The alternate historical conceit is that science fiction is a literary space reserved for women, and a mode of escape for housewives laboring under the sexist mores of American society in the 1960s--thus playing a similar role to romance literature in our world. The narrative begins at Edwards Air Force Base, where Walden is a test pilot trying to gain entrance to the prestigious astronaut program; after he is accepted, the couple move to Houston, where Ginny is inducted into the Astronauts' Wives Club (now subject of a network television series), thus becomes something of a public figure. The new role subjects her to intense social pressure--to be a model housewife and to thereby reflect well on the program and, hopefully, increase Walden's chances of being assigned to one of the upcoming Apollo missions. But the pressure, and Walden's increasing absence, make it increasingly difficult for Ginny to write. So she decides to learn first-hand about the Apollo program, in the hopes that this will provide the creative spark she needs to revive her writing career.

Throughout the traditional third-person narrative, Sales interjects anecdotal commentary--written in such a way as to suggest the editorializing of a historian, but which is in actuality an equally fictional narrative about "V. G. Parker" (i.e. Ginny Eckhardt) navigating the institutional sexism of SF as it actually existed in the 1960s. The main narrative and this "annotational" one come together in the story attributed to Eckhardt/Parker, "The Spaceships Men Don't See," whose "housewife heroines" and mild explorations of sexism in the astronaut program are said to provoke a negative (and realistic) response from the male readership of Galaxy. Sales presents the story within the text, a literary trope dating back to Hamlet, and which serves to literalize Ginny's frustration at how the subservient position ascribed to women shackles her dreams.

Given this formal and thematic complexity, I think it's fair to say that All That Outer Space Allows is the most ambitious entry in the Apollo Quartet. It is also significant for its commentary on the field of science fiction. As a critic and fan writer, Sales has dedicated himself to recording the "secret" history of female-authored SF, and to bring attention to the many unrecognized, underappreciated and out-of-print female-authored SF novels published over the past century. All That Outer Space Allows is, fundamentally, an attempt to explore this history through fictional device, and it by and large succeeds. Ginny is an strong, well-realized character, and Sales does a great job evoking period and place--reflecting a meticulous level of research. There are, of course, some moments when it's clear that the author is not American--Ginny referring to the family vehicle as "the Impala" rather than "the car," as Americans would when there is only one to choose from, or the narrator referring to Ginny as having "finished her toilet"--a phrase that doesn't make sense in American colloquial English. But these are relatively infrequent; at most points one forgets that Sales is British.

I've gone back and forth on the breaking of the fourth wall, however. Initially I found it distracting, but at some points it seemed to work beautifully. In the end, though, the cost of shattering perspective is just too high. Formally, I think I would have preferred the commentary to come in the form of footnotes, as one might find in an academic edition of a novel. That would allow the reader to choose between reading the text on its own or shifting to the notes as they come up--an arrangement that would also, I might add, incentivize re-reading. Moreover, at times the "annotational" narrative is too blunt a tool, hammering in messages that are already clear in Ginny's story. At the same time, I do appreciate the experimentation, and found both the "annotational" narrative and story-within-a-story to be worthwhile endeavors. I'm just unconvinced by the mode of presentation.

Taken together, this marks All That Outer Space Allows as the most difficult volume of the Apollo Quartet to quantify. It is absorbing and undeniably powerful, and takes risks that I wish I encountered more frequently in the genre. But the biggest risk, at least as far as I'm concerned, doesn't quite pan out. Perhaps it's a testament to the things this novella does well that I nevertheless recommend it in the strongest possible terms.

Penalties: -1 for breaking perspective with in-line annotations when footnotes would have been better; -1 for making an obvious message a little too obvious.

Read about our scoring system here.

POSTED BY: The G--purveyor of nerdliness, genre fanatic and 'nerds of a
feather, flock together' founder/administrator.