Microreview [book]: The Grace of Kings by Ken Liu 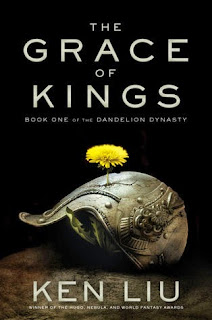 The Grace of Kings (Book 1 of the Dandelion Dynasty) opens in as exciting a manner as imaginable. The young and reckless Kuni Garu--one of the heroes of the tale--goes to an Imperial Procession held to memorialize Emperor Mapidere's unification of the kingdoms of Dara. While there, Kuni witnesses a bold assassination attempt on Emperor Mapidere. A man, riding a battle kite (yes, a battle kite!), suddenly dives at the Throne Pagoda and launches a ball of fire at the emperor. The quick thinking of the Captain of the Guards saves the emperor, and after a few more failed attempts punctuated by brilliant theatrics, the would-be assassin flies off toward the city of Zudi. This assassination attempt leaves an indelible impression on the young Kuni Garu, who would later play a central role in the re-unification of Dara archipelago.

The true story, however, begins years later, with the death of Emperor Mapidere. In the wake of Mapidere's death, palace treachery causes the empire to split up. In this tumultuous period, two young men quickly assume the leadership of a broader rebellion: Mata Zyndu and Kuni Garu. Both men are polar opposites. Mata Zyndu is a man bred to rule. The proud son of a deposed duke, he holds static notions that rulership is best left to the "legitimate" old nobility. And he emerges as a force to be reckoned with on the battlefield, blessed with martial valor by the gods themselves. Standing side-by-side with Mata Zyndu, however, is the rather unlikely character of Kuni Garu. Born with no noble ties, Kuni Garu is a restless commoner ne'er do well, one who has dreams of greatness to be gained through his charm and wit. The relationship between Mata Zyndu and Kuni Garu holds the key to the future of the entire land of Dara.

The Grace of Kings is Ken Liu's attempt to retell the rise of the Han Dynasty in China in epic fantasy form. Liu takes as his inspiration not only the history of the Han dynasty (as told through the Shiji, or Records of the Grand Historian), but also such classics as the Romance of the Three Kingdoms. He builds off such major themes from Romance as virtue versus vanity, nobility versus cruelty in unique and interesting ways. But Liu looks far beyond historical China for inspiration. Although Dara is based off Han dynasty China, The Grace of Kings features in equal part influences from Greek and Roman epic poetry and theater traditions. The storytelling often brought to mind Homer's Iliad, and the plays of Aeschylus. The gods in the Dandelion Dynasty serve as members of a Aeschylean Greek Chorus (minus the dancing and singing, of course), and help to highlight the tragic elements in the story and to reinforce the novel's emotional mood. And the gods do not refrain from covertly aiding their champions, whenever possible.

In many ways, The Grace of Kings delivers in grand form: it is intelligent and engaging from start to finish. Liu writes with a crisp and engrossing prose. He creates a wonderful cast of characters, some of whom are defined by a decidedly mercurial nature. Both Kuni Garu and Mata Zyndu change with the political life of the times, and are impacted not only by their own values and mores, but also by the actions by others. It is this continuing, shifting character development that kept my avid interest throughout the entire volume.

What Liu does with extraordinary verve is to show the morally debilitating impact of power. The Grace of Kings, after all, is a story about power. Quests for power bring young men like Kuni Garu and Mata Zyndu (and in some cases, women) together in the bonds of friendship. Assumption of power, however, proves divisive, disruptive, and destructive. Once power is gained, erstwhile friends find themselves divided by ideals, by mistrust, and by divergent philosophies of governance. Some of the most interesting sections of the novel deal with reflections on the use of power, as when Kuni Garu reflects on the "tyranny" of Emperor Mapidere.

Despite the novel's distinct strengths, however, I ended up with mixed feelings. This is why it has taken me so long to upload this review! Granted, it is beautifully written, and Liu has done a wonderful job of marrying the Romance of the Three Kingdoms with the classical  traditions of the Iliad, the Odyssey, and the Aeneid. But the major issue for me was its focus on a much more expansive cast of characters than what felt necessary. Kuni Garu and Mata Zyndu were the only major characters around for the entire tale. Numerous other characters made brief cameos, told their tales, gave their biographies, faced a difficult choice, then faded away from the story only to be replaced by the next cameo role. To give but one example, the Kikomi story provided a wonderful narrative arc on virtue versus vanity, but did it add anything that couldn't have been told in the main story line? I wonder. Granted, including a huge cast of narrative arcs (like Kikomi's) is very much in the tradition of the epic poems and epic tales that Liu used for inspiration. So although this is not a weakness in his writing style, it kept rubbing me the wrong way. The true irony here is that what I love about the concept (the marriage of epic fantasy with historical epics) ended up as a distraction for me. I wanted to like the execution of the story more than I actually did.

Still, this doesn't take away from Ken Liu's achievements. The Grace of Kings is an intelligent and engaging retelling of the rise of Han dynasty China. And it feels both old and new at the same time. With The Dandelion Dynasty, Liu has crafted a promising new silkpunk fantasy that I would recommend without reservation.

Bonuses: +1 for the wonderful melding of Greek, Roman, and Chinese literary traditions.

Penalties: -2 for the successive narrative arcs of characters who "arrived," told their stories, and faded away...