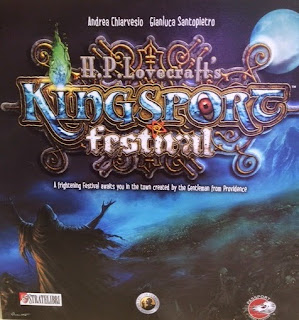 It is safe to say that the Cthulhu Mythos created by H.P. Lovecraft has hit a point in mainstream consumerism where you question anything that is using this "hook" to sell a product.  Like the zombie craze, I tend to be a bit skeptical of products that appear to be cashing in on a trend.  It pleases me to say that the theme in Kingsport Festival is not an afterthought and was done with respect to the horrors that H.P. Lovecraft created. 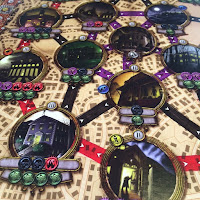 Based on the short story, The Festival (you can read it for free here), players assume the roles of cult leaders and attempt to invoke the powers of the ancient ones and invoke unthinkable horrors in this bizarre celebration of the occult.  In addition to competing over what Gods to invoke and what buildings to occupy, players must deal with the threat of raids and losing their own sanity.  Investigators will periodically lead raids on the villages in an attempt to stop the actions of these cults and players must combat these raids through special abilities and spells.  The game supports 3-5 players and each game lasts just over an hour.  Players must strategically acquire unique spells, occupy specific buildings in town, and balance their ability to maintain sanity and prevent raids over a series of 12 rounds.

Each round takes place through six different phases (turn order, invocation, concession, expansion, raid and time). The breakdown of each round into these phases makes the game accessible and efficient.  Throughout these phases, you will earn a variety of resources from the different Gods in an attempt to harness the power of a variety of buildings.  This provides a worker placement feel, but based on your dice rolls and what Gods you evoke your strategy will change each round.   To me this game shines during rounds in which a raid occurs.  It mixes up the gameplay and adds an additional element of strategy in selecting which buildings to occupy.  The choice in selecting what building to occupy is further enhanced by balancing your needs vs. blocking your opponent's needs.  I feel this game plays best with four players, but has been an enjoyable experience each time it has hit the table. 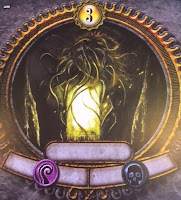 The components in this game are top notch and the artwork is stunning.  The wooden bits are satisfying to place over the map of town and the cards help immerse you in this horrifying world.  Passport took great care in delivering a game with a high production value that is respectful to the horrors of H.P. Lovecraft.  My only complaint would be the wooden dice.  While they fit well with the other bits, I prefer my dice to have a bit more heft.

Kingsport Festival is a combination of strategy and the luck of the dice.  This balance makes it accessible to new gamers, but provides enough depth to bring it back to your table for multiple plays.  One of my favorite aspects of this game is how each round is truly unique.  What Gods are at your disposal and what order you are allowed to invoke them changes every round.  Players must think on their feet and be willing to adapt.  If you are an H.P. Lovecraft fan than this is a must own game.  There is something satisfying playing on the same team as Cthulhu.  While I have enjoyed other games playing as an investigator trying to stop the elder gods, it is very satisfying to leverage these gods to invoke unspeakable horrors.

The Math
Baseline Assessment: 8/10
Bonuses: +1 flipping the script and allowing us to side with the ancient ones.
Penalties: -1 for light wooden dice.
Nerd Coefficient: 8/10. well worth your time and attention
[See explanation of our non-inflated scores here.]