I think I am in the denial phase right now.  I don't want to confront the fact that a lot of books that I care about either just ended (Ghosted) or are racing to its conclusion faster than I wound prefer (Mind MGMT, Sixth Gun, Fables).  As I reflect on these series and Locke and Key, possibly my favorite series of all time, I wonder how much value is there having a defined beginning, middle, and end to a series.  I think having a finite number of books in which to tell a story forces the creators to be more mindful with their decisions and efficient in their storytelling.  While it is going to be hard to say goodbye to some friends this summer, at least we'll always have the memories.  Hopefully some deluxe trades as well. 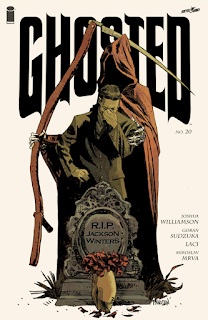 Ghosted #20 - It is with mixed feelings that Ghosted came to an end this week.  It felt right, made me feel happy for Jackson, and inspired me to revisit this series from its first issue.  It also concluded with a heartfelt letter from creator Joshua Williamson.  It is easy to assume that writers we look up to have an easy life and a dream job.  Who doesn't want to write comics for a living?  Williamson pulled back the curtain on his own life and we learned that Ghosted was a reflection of some demons he was dealing with in his own life.  I don't know if he had this conclusion figured out when he originally pitched the story, but it seems fitting given the direction Williamson appears to be headed in this industry.  Close the door on a story with a rough start, and begin a new journey with endless possibilities.  May Jackson Winters resist the temptation to abuse the power of his new role and may Joshua Williamson continue to write amazing stories for his new and larger audience.  Congratulations on an amazing run with Ghosted.

The Rest:
Mind MGMT #33 -  Meru has her team assembled and just got the advice of a master strategist trained in the Mind MGMT ways.  The final assault is here and it looks like Meru has a fighting chance.  It was thrilling to read the squad break down different lines of defense, but the highlight was Meru seeing her foster parents one last time.  Curse you Matt Kindt for putting something like this in a book that reads like a summer blockbuster.  Speaking of which, when is the Mind MGMT coming out?  I would watch it.  It is both sad and thrilling to see this epic story work its way to the grand finale.  I am worried Henry won't survive.  I have good feelings about Meru.

Daredevil #15.1 - After discussing two amazing books that are ending soon, we move to a new leaping on point for Daredevil.  Waid shares his storytelling role in this one-shot that includes a few stories from Daredevil's past.  If you have been wanting to hop on the Daredevil bandwagon this would be a nice start.  It provides a good retrospective of the man with no fear.

Star Wars #5 - When I first heard that Boba Fett was going to get his own movie I had mixed feelings.  He is without a doubt one of the most iconic characters in Star Wars, but he is such an unknown.  After reading this issue, assuming the movie can be as good, I am all about a Boba Fett flick.  After being hired by Darth Vader, Fett has tracked Luke to Tatooine and isn't pulling any, and I mean any, punches in finding out the information he needs.  Just when things really pick up we are left to wait until the next issue for the confrontation.  Well done Marvel.  Well done.

Skylanders #9 - The first major arc of this series reached it conclusion in a satisfactory manner.  I am a big fan of redemption, particularly in books my son reads, and the notion that characters make mistakes and can be forgiven for past transgressions.  That was the theme in this issue and I appreciate characters that have depth and serve as good talking points to kids.  Not my favorite all-ages book, but one I highly recommend if your child plays Skylanders.  If you are an adult who enjoys the game (I'm talking to you!) then you will enjoy this series as well.