Microreview [book]: A Slow Regard of Silent Things by Patrick Rothfuss

"Eventually a cloud hid the moon. Smug thing. And Auri took the chance to scamper back into the Underthing." 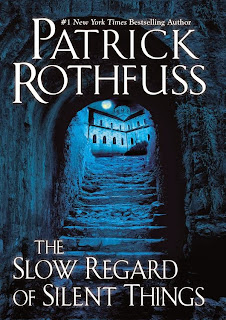 It’s been a couple years since my last Kingkiller re-read, and I guess I forgot how fantastic a storyteller Patrick Rothfuss is. I did read Bast’s short story in Rogues, and that was a fun don’t get me wrong, but I was utterly blown away by A Slow Regard of Silent Things.

If you are unfamiliar with Rothfuss’ work, he is the author of the acclaimed Kingkiller Chronicles, which essentially is the autobiography of Kvothe, a legendary magician and musician (this of course is a very butchering and abbreviated summary). I highly recommend this (as of now unfinished) series. A Slow Regard of Silent Things takes place in the Kingkiller world, a world we recently learned was called Temerant. It follows a week in the life of Auri, a secondary but memorable character. If you’ve read Kvothe’s story you’ve already met Auri and know a few things about her, but not much, as she remains quite enigmatic. You do know, for example, that she is reserved and childlike, and lives in the underbelly of the University, and of course that she assigns names and emotions to things. But, you could figure this much out even if you haven’t read the Kingkiller Chronicles, which brings me to my one major complaint about the novella: the Author’s Foreword. Rothfuss claims that if you aren’t familiar with Kvothe’s world you shouldn’t read Auri’s story. I couldn’t disagree more, and I think Rothfuss really sells himself short here.

A Slow Regard of Silent Things is truly a work of art. It is an entire novella bereft of dialogue and the vast majority of the characters are inanimate objects. But it is riveting and heartwarming. It is hard to put down. It is the story of Auri yes, but it is also the story of her silent things, as they (and by extension Auri) try to find their proper place in this world. The narrator tells the story as Auri would, assigning names and emotions to objects in a way that wraps a hand around your heart. For example, the sense of worry and despair I felt when Auri dropped her light was for Foxen (the light) not for the prospect of Auri being left in darkness (at least superficially). 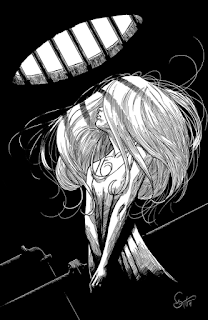 The week in the life of Auri is all in preparation for a visit from “he”. If you’ve read the Kingkiller Chronicles, you know who “he” is it adds a whole other level of significance to their relationship. If you haven’t read Kingkiller, then you may be wondering if “he” is even real. You will also be wondering who Auri is, if she’s a child or an adult, where she came from to know the things she does, and how she got this way. Out of context, the Underthing becomes the world that it built, and it is built beautifully. As we run with Auri from room to room we can almost feel the change in temperature and see the change of light. Then, unexpectedly, we get glimpses of the outside and in-between worlds and the mystery just adds another level of joyful complexity to the story. That coupled with the beautiful illustrations scattered throughout make A Slow Regard of Silent Things a true pleasure to behold.

Reading this I thought maybe I would discover something more about Auri and her past, but what really happened was I re-discovered the power of storytelling and how brilliantly and successfully conventions can be broken. Rothfuss is right when he says A Slow Regard of Silent Things “doesn’t do a lot of the things a classic story is supposed to,” but he’s wrong when he says “you’re probably going to feel pretty lost” if you haven’t read his other books. Honestly, I think the relevance of this novella as a piece of art is stronger when taken out of context. I’ve tried to be vague regarding Auri and Temerant in this review, because I really want someone unfamiliar with the Kingkiller Chronicles to read A Slow Regard of Silent Things and tell me if I’m wrong.

Bonuses: +1 capturing the audience with 0 dialogue, +1 characterization of Auri through inanimate objects

Nerd Coefficient: 9/10 "very high quality and standout in its category"

Reference: Rothfuss, Patrick. A Slow Regard of Silent Things [DAW, 2014]