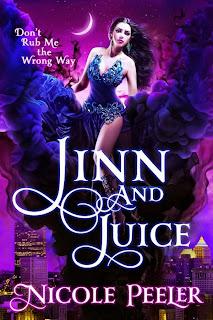 I will admit to being drawn to this book because of the alcohol pun on the cover. And make no mistake, the characters in this book certainly know how to drink (really expensive booze), so I was not disappointed. Nor was I disappointed in the premise, that a thousand-year-old human-turned-jinni named Lyla who works as a dancer at the world's coolest burlesque club gets drawn into some dangerous and dramatic intrigue just as the curse that turned her into a jinni is set to expire. Of course, the curse is only lifted if she can manage to stay un-Bound when the curse expires.

On the surface this is a story that seems...problematic at best. Most of the conflict, after all, centers around the fact that Lyla can and does become enslaved by a Magi, a special kind of human who are the paper to the Jinn's rock. However, the book does take a lot of care to take a story-line fraught with consent issues and...actually deal with consent in an open and forthright manner. With a very diverse cast of characters and a story that provides plenty of action and huge stakes, the book managed to succeed in convincing me, at least, that it could deal with sexuality, consent, and attraction in a way that, while not perfect, was still much better than most paranormal romances I've read.

And I suppose I should talk about genre a little bit here. Jinn and Juice is obviously playing with genre in a lot of ways. Just look at the cover. I look at that and I don't know what to think. The color and title make me think paranormal romance. But the image leans a bit more urban fantasy (ASIDE: UF works tend to feature women on the covers while PR works tend to focus more on men but appealing to the female gaze. The general message being that PR books are more about the man as sexual creature and the UF books more about the woman as an active and sexy badass. Obviously this is just my impression, and based solely on my own reading experiences, but it is what I've observed). What's inside is a nice blend of the two (and here I would say that most UF and PR books are blends of similar plot elements and tropes but this book seems more consciously a blend). There is the focus on the relationship between Lyla and the man who effectively enslaves her, Oz, and yet there is no sex. Yes, the book subverts expectations enough to have a book that features a woman who works as a dancer in a burlesque club not having any sex while being completely sex positive. Not to say there is no sexual tension (there is plenty), but the book does more than pay lip service (absolutely no pun intended) to consent (okay, maybe a little pun intended).

And the cast, as said, is quite diverse. Aside from Lyla herself, who is from the Middle East of a thousand years ago, there is an entire cast of great characters who make up the rest of the staff at Purgatory, the burlesque where Lyla works. Not that all of the depictions completely escape feeling a bit cliche, but I think that at the very least a great deal of care was put into the depictions of the characters and I think the author did a good job of making them all complicated, giving them all more than just a surface coat. The world building is also very well done, revealing a world with paranormal forces boiling just below the surface. There is a unique and clever use of setting with Pittsburgh, and while there isn't a great sense of the place beyond a few locations, there is definitely a sense of its mood, its presence. I might not really know what the place looks like, but the book does show how it might feel to have an enormous source of tainted magic coursing through the rivers and streets.

The story, too, has its moments. There is a nice mystery to the whole affair, and though Oz comes across as a bit impossible at times, he at least is not shown to be always right, always the one saving the day. Lyla is still the most active agent, and though she is helped by her friends and by Oz, the book takes care to have her retain her agency. Of course, the villains of the book are a little...obvious and while some attempt was made to give at least one of them a little depth, mostly they are cardboard cutout villains, bad guys who are angry and lashing out and not really willing to listen to reason at all. So that aspect of the book was rather a let down, having Lyla and Oz's complicated relationship pick up the slack.

And in the end I think that the book mostly succeeds at being fun while trying to be more diverse and subversive. Certainly it's better than most of the paranormal romances I've read in how it treats consent and sex and attraction. And the setting and world building are solid and there is a lot to enjoy about the story. At the same time, while it subverts the Master/slave dynamic that make a great many paranormal romances incredibly problematic, I was still uncomfortable at times with the set up. Yes, Oz is a "good" guy. He doesn't use his power for sex or abuse. But the story can still be read that he should be rewarded (with Lyla) for being "good." And there really should be no expectation of reward for that good behavior. So it's not quite as subversive as it could be. Still, it does manage to do a lot right and it was quite fun to read (also, I love all the drinking that goes on). So that's something.

Bonuses: +1 for managing an artful mix of urban fantasy and paranormal romance, +1 for dealing with consent in an open manner

Negatives: -1 for some rather flat villains

Nerd Coefficient: 7/10 "A mostly enjoyable experience"
(check out our scoring system to see why a 7/10 is quite good indeed)