Microreview [book/movie combo]: The Man Who Fell to Earth

How to adapt a sci-fi novel? Add rock stars. And sex. So much sex.

Walter Tevis' brief 1963 novel is a heartbreaking examination of self-doubt. In it, an alien calling himself Thomas Jerome Newton lands his spaceship in a remote field in Kentucky with a mission and a sheaf of papers containing specifications for scientific breakthroughs unheard of on this planet. The scientific ideas he turns into patents, which he turns into an extremely profitable company called World Enterprises, which he uses to fund his mission. Pretty smart.

Seemingly the one person out there in the general public who catches on that all this technology coming out of this new company may be alien in nature is a heavy-drinking, burnt-out college chemistry professor named Nathan Bryce. Even the lawyer Farnsworth who helped Newton set up World Enterprises and runs the day-to-day operations doesn't have the same inklings Bryce develops regarding the reclusive Newton. So Bryce seeks Newton out and manages to talk his way into a job at World Enterprises. This new success leads Bryce to put the bottle down, and re-commit himself to chemistry.

But Newton finds himself in very different mental, emotional, and spiritual circumstances. After an unfortunate run-in with Earth's gravity leaves him convalescing, Newton befriends his de facto nursemaid, Betty Jo, who happens to be a Scotch-addled souse. His home planet of Anthea (the native name for either Mars or Venus) is a wasteland after global wars reduced the population to only a few hundred survivors, and it is Newton's responsibility to develop a space-going ferry to bring them to Earth. The stress upon him is tremendous, as is his profound loneliness, so the introduction of wine and Scotch whiskey come as a welcome diversion and sedative, but his increasing dependence on them threaten the success of his mission.

Walter Tevis himself was descending into alcoholism as he wrote the book. Although, as he discussed in interviews years later, he seems to have not realized it at the time. It's stunning, then, how the writerly part of his brain fundamentally understood and could successfully transpose onto the narrative ideas and experiences Tevis' conscious mind was keeping at arms' length. As much as this book is about alcoholism — and it is — it seems more fundamentally about failure. In the book, alcohol is the medicine that failures self-prescribe to forget their disappointment at having not become what they felt they might have if...whatever happened to them hadn't.

Despite a relatively slight page count, this is an engrossing book unafraid of very big questions. Beyond failure, beyond alcohol, friendship and loneliness, it also seems resigned to the fact that we'll one day blow ourselves up and wipe ourselves out. There's some thematic overlap with Nevil Shute's On the Beach, and I found myself having a similar reaction to The Man Who Fell to Earth. 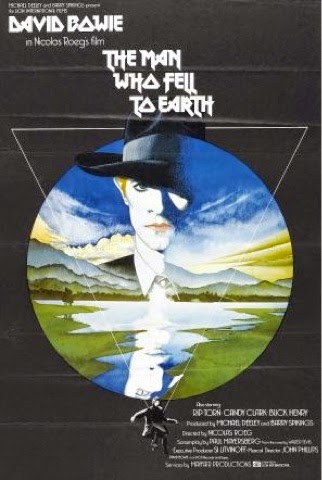 Nicolas Roeg's 1976 film adaptation of The Man Who Fell to Earth has a troubled history, with the film's American distributor chopping some 20+ minutes out of the movie for its initial release because he apparently didn't understand it. But Criterion has released the full version in a characteristically wonderful edition with a bunch of wonderful special features.

The Man Who Fell to Earth is one of the most interesting book-to-film adaptations I've come across because it is actually quite a faithful adaptation, but very quiet about it. Roeg doesn't spend a lot of time explaining what's going on, but communicates the story with true visual mastery. It is a true testament to how much the oft-quoted mantra "show, don't tell" can really accomplish. It's also easy to see, however, how someone might find themselves utterly baffled by what's going on in this movie.

One thing that is going on, without a doubt, is gettin'-it-on. The source material is almost entirely asexual. Newton is essentially sexless, Bryce is too old to be interested in sex, and Betty Jo is presented as dumpy and matronly. Boy, not the movie, though. David Bowie has rock star magnetism to burn, Betty Jo becomes the lithe and oft-naked Mary-Lou, who introduces Newton to a helluva lot more than just alcohol, and the aged Bryce is reimagined by Rip Torn as a student-shagging professor who only seeks out World Enterprises after it becomes clear his exploits will likely cost him his spot at the university.

But like Tevis' Cuban Missle Crisis-adjacent book, Roeg's film is one for its time. The sexual revolution had happened and TV had proliferated, so Roeg's version of T.J. Newton simply has more options at hand when it comes to losing himself.

In the end, both versions stand alone as engrossing works taken on their own terms.

Bonuses: +1 for the way each telling uniquely captures its time; +1 for the character of T.J. Newton, and the ways in which his trial of pretending to be something he isn't remains moving in both tellings

Penalties: -1 for the total lack of outside scrutiny World Enterprises receives until very late in the proceedings

Nerd/Cult Film Coefficient: 8/10. Well worth your time and attentions.