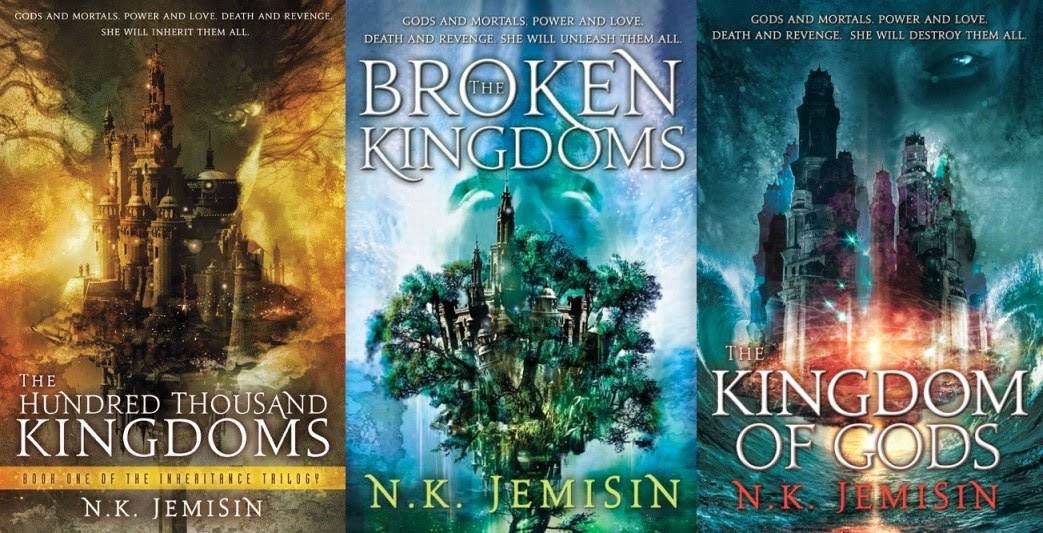 N.K. Jemisin is a rising star and one of the brightest young voices in the fantasy genre. With evocative and engaging prose, moving character-driven stories, and fantastic worlds that feature a panoply of gods, demons, humans, and even ninja priests, Jemisin's work has thus far been a breath of fresh air. We at Nerds of a Feather in particular love her Dreamblood Duology, which proved to be perhaps the best reading of 2012 (see my reviews of The Killing Moon and The Shadowed Sun; the latter received the extremely rare score of a 10/10). So needless to say, I was excited to pick up her Inheritance Trilogy, which was recently re-released in omnibus form.

The Inheritance Trilogy is composed of three novels: The Hundred Thousand Kingdoms, The Broken Kingdoms, and Kingdom of the Gods. Overall, the trilogy is centered on the story of the Three, the elder gods: Bright Itempas, lord of light and order; Nahadoth, the Nightlord and god of chaos and change; and Enefa, the goddess of twilight and life. They waged a war among each other more than two-thousand years before the story begins, one that devastated both humanity and many of the lesser gods. In the process, Itempas killed Enefa and chained Nahadoth and a number of lesser gods to serve the Arameri, his devoted human followers.

The first book, The Hundred Thousand Kingdoms, begins two-thousand years after the Gods' War, in a world where the Arameri followers of Itempas reign supreme. Yeine Darr, a northern "barbarian" outcast, finds herself called to the center of Amn, the beautiful and dangerous city of Sky. To her utter shock and dismay, she finds herself declared a successor to the ruler of Amn and thrust into a dangerous succession dispute against two dangerous full-blooded Arameri. But since Yeine harbors a secret, she soon finds herself thrust into a perilous, high-stakes game pitting the Arameri and their imprisoned gods against one another. In this succession dispute, the choices Yeine makes could have dramatic ramifications, and the fate of Sky and the realm itself are balanced on a razor's edge.

I don't want to spoil the trilogy, so I will just briefly mention some of the major plot lines of the second and third books. The Broken Kingdom, the second tale, begins a decade after the events of The Hundred Thousand Kingdoms. It centers on the story of Oree Shoth, a blind woman who has a magical ability to paint gorgeous pictures and to see shimmering outlines of magic, gods, and godlings. One day, she decides to take in a homeless and mute godling, who she calls "Shiny." Together, they become embroiled in  a mystery, trying to discover why (and how) gods are being murdered across Amn. And the third tale, Kingdom of the Gods, transports the reader forward hundreds of years in time and shifts focus to the child-like trickster god, Sieh. After making an oath with two Arameri children (on a whim of sorts), Sieh loses his immortality. Slowly dying, Sieh begins a quest to figure out how to regain his immortality. In the process, he slowly learns of a possible war that could threaten the very world itself.

Taken together, The Inheritance Trilogy is epic fantasy writ large. The three books span a period of hundreds of years and follow gods and humankind alike, telling tales of love, betrayal, envy, forgiveness, sacrifice, and repentance. In the process, the reader learns that aside from immortality and power unimaginable, the gods themselves seem so very "human." After all, gods and godlings may be powerful, but they are equipped with the same powerful emotions that at time make them feel all too human. And strikingly, the immortals envy the lives of their mortal followers. Brief their lives may be, but filled with a yearning for meaning and an intensity that the gods cannot help but admire.

The Hundred Thousand Kingdoms and The Broken Kingdom are both fantastic. Both novels feature engaging prose and are so rich in detail and beauty that the plot almost becomes secondary to the overall story. Granted, each story is built upon a central mystery, but I found myself much more interested in the emotions and relations between the characters than I was with the central plot. Jemisin has thus succeeded in creating truly powerful character-driven stories. Were I to give scores for them, both would have received an 8/10.

Kingdom of the Gods, however, left a sour taste in my mouth. It follows Sieh, a god who is much more interesting as a side character than as a main character.  I quickly lost interest in Sieh's plight, cared little for his emotions and the whole melodrama of him becoming mortal, and cared even less for his relations with the two Arameri children. Following Sieh around felt almost like a Star Wars sequel focusing wholly on R2D2. Sure, we all love R2D2, but do we really want to spend 2 hours watching him click, beep, and open up doors to save the Rebel cause? Actually, now that I think about that, "R2D2: The Revenge" still seems better than following a bratty, melodramatic godling around the realm of Amn for hundreds of pages. Still, Kingdom of the Gods features the same poetic prose as the rest of the series and deals with  norms of love, life, and even sexuality. But it falls flat after the beauty of the first two books. Were I rating it as well, I would have given this book a 5/10.

Despite the weak ending, I would still highly recommend The Inheritance Trilogy as required reading for fans of fantasy. N.K. Jemisin has crafted a beautiful story of love, betrayal, and repentance. The power of her prose, the richness of detail, and the complexity of her character-driven dramas, and the overall consistency of quality novels make Jemisin one of the best young authors in the genre.

Bonuses: +2 for the power and richness of the first two books.

Penalties: -2 for centering a story on the overly melodramatic godling, Sieh.