A match made in...well, if not heaven, then at least the South Bay First of all, I have to preface this by saying Thomas Pynchon is my guy. I haven't read all of his books (they're usually quite long...), but I've read most of them, and re-read most of those. I'm also (no surprise) a fan of genre fiction, so in 2009 when Pynchon published what was touted as a detective novel, I got very excited and picked up Inherent Vice the day it was released. I didn't get a noir/crime/detective genre novel, though. Instead, I got a Pynchon novel whose main character happens to be a P.I.

The story revolves around Larry "Doc" Sportello, a private investigator in the fictional Los Angeles South Bay city of Gordita Beach, California, in 1970, who lives in a perpetual haze of weed smoke and, along with everyone else in the book, under the cloud of the Vietnam War, Nixon White House, and the crashing end of the 1960s, which took place with the Manson murders. The book begins with the familiar P.I. trope of Doc's "ex-old lady" Shasta Fay Hepworth, an aspiring actress and now plaything of the married, high-profile housing developer Mickey Wolfmann, paying Doc a visit. Shasta thinks Mickey's wife and boyfriend may be conspiring to get Mickey involuntarily committed to an asylum in order to get their hands on his money. The next day, Doc is approached at his office by ex-con Tariq Khalil, who is trying to recover money from Glen Charlock, an ex-inmate and member of an Aryan Nation biker gang hired to work as Mickey Wolfmann's bodyguards. Doc begins looking into the related matters, and on his visit to the construction site of Wolfmann's Channel View Estates, he's knocked unconscious and wakes up to find Wolfmann disappeared, Charlock murdered, and Doc himself the prime suspect, thanks to "renaissance" detective "Bigfoot" Bjornsen. He's not really a suspect, but Bigfoot likes to kick Doc around and they have a history. What follows from there, and for the rest of the novel, is much harder to explain. But it involves a secret organization (echoes of the Tristero), faked deaths, lost continents, Hollywood witch hunts, zombies, surf music, Nazis, moral, physical, and legal corruption, and so, so many drugs.

The takeaway is that this book is a tremendously fun and complex (mostly) comic novel that could also be considered pretty much a failure in terms of being a straightforward detective novel. But that's not what it wants to be, and if you're expecting a detective novel, you're going to be waaaay frustrated. Pynchon delights in juggling more and more glass balls, and then gleefully letting them crash to the ground and shatter. This isn't unique to this book — like silly songs and odd sex and long sentences and weird names and and complex, fantastical digressions, they are Pynchon's signature — and if you're willing to take the trip, I'd highly recommend it. 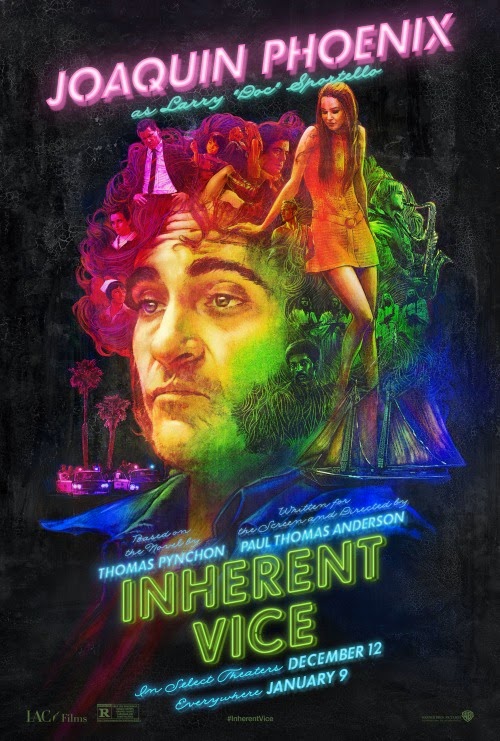 All of the above does not, to me, sound like a particularly good movie. On it's face, it's too unfocused and meandering a story, with far too many characters, and no clear goal that it sticks with. Judging by popular reactions, many who have not read the book seem to agree. But I think it's because, like I noted above, they're probably expecting a detective movie. I've seen lots of people mention The Long Goodbye and The Big Lebowski as cousins of Inherent Vice, although suggesting that Inherent Vice doesn't measure up artistically.

Allow me to disagree.

First of all, I was in the theater on The Big Lebowski's opening night, and there weren't a whole lot of people in there laughing along with me. And there weren't a whole lot of positive reviews at the time, either. It found its audience later, and that may be the case with Inherent Vice, because time allows movies to be taken for what they are, rather than how the studio marketing department has decided to sell them at the time of their release. To my mind, this is a near-perfect adaptation of Pynchon's book, filled with smart creative decisions that allow it to hang together as a movie.

The first half of the film is an almost literal translation of the events in the book, and then about halfway through, Paul Thomas Anderson made a really smart geographical decision that allowed him to cut about a third of the book out, while maintaining the spirit of those pages. In addition, the movie focuses much more on the relationship between Doc and ex-old lady Shasta Fay, giving the film an emotional through-line that the book simply wasn't that concerned with. Another fantastic decision Anderson made was to give whole swaths of the book's text to the relatively minor character of Sortilege (played by the wonderful Joanna Newsom), which allowed the movie to maintain Pynchon's narrative voice, and helped tie the room together, narratively speaking.

I saw this movie a week ago now, and can't stop thinking about it. I'll probably go see it again this week. I won't suggest it's for everybody — it is not — but it did exactly what it set out to do with very difficult source material. And, as a final aside, I have it on good authority that the author himself is well pleased with how Doc's adventures came out onscreen. If you want to get in touch with me and ask more, you know how to reach me...

Bonuses: +1 for the complex interplay of straight-world, hippie, music, and business cultures (book); +1 for the stunning, single-take scene in which Doc and Shasta Fay have sex, which Katherine Waterston plays both physically and emotionally naked.

Nerd Coefficient: 9/10. Pretty dang great, unless you voted (our would've voted) for Nixon...