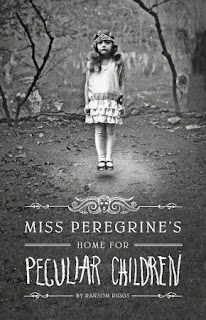 So here's the deal: the author—who has one of the coolest first names ever!—is a vintage photograph collector, and he noticed that old photos of children are sometimes pretty weird. From among his vast collection, he chose some of the weirdest and decided to use these peculiar photographs as the skeleton of a supernatural story. He even interweaves the fifty chosen photos, almost all of which are unaltered, into the text of the story, which is a wonderful idea. Beyond helping readers visualize the sort of strange, magical children he had in mind in his story, it also gives us an unusual degree of insight into how and why he was inspired to write the story as he did. In other words, the photos are a kind of glimpse into authorial process and intent.
All of this is great, and it's made better by, in terms of style, the distinctly above average quality of the writing. This was his first book, and for a first effort it's very well written, though the dialogue and exposition in the second half leave something to be desired. And in some ways, the story is intriguing—in the current cycle of superhero worship, who can't get behind the idea of kids with bizarre powers, after all? And for existentialists, or simply jaded ex-fantasy/superhero/ sci fi junkies bored of the usual fare, the experience of reading this image-integrated book is almost unique, and should win points for the value the photos and the format added.
Where the book definitely loses points, though, is in the development of the plot and characters. Without giving too much away, there is a strong resemblance to the central conceit of the movie Groundhog Day at work in the story, but unlike the mesmerizing character development of Phil, the characters ensconced in this particular story's temporal anomaly show not a single trace of the 'sadder and a wiser man' effect of having to relive the same period of time. Moreover, roughly halfway through the reader is savaged by a sustained barrage of exposition—bad enough on general principle—but made worse still by the strikingly arbitrary nature of many of the rules governing the magical aspects of the world. So we readers have no choice but simply to accept, no questions asked, that the mysterious antagonists are invisible to almost everyone (why?) but their shadows can be seen (double why?) and they become fully visible when feeding (triple why?) but they can't enter time anomalies (sigh) but their more evolved bad guy handlers can (double sigh) and plus only women who can change into a certain flighty type of animal can manipulate time (triple sigh).
To be sure, many stories of the supernatural suffer from this sort of totally arbitrary provision (why can't vampires cross running water? Is it just me, or is Quiddich total nonsense? And don't even get me started on the infuriatingly random 'rules' of the magic charms in I Am Number Four!). But I think there are two kinds of arbitrariness in such stories, or rather two types of stories that contain arbitrariness: 1) stories which are very well thought out and planned, in which such 'take on faith' provisos have been reduced to the fewest possible number; and 2) unmanaged 'hey, I saw a guy without visible pupils in one of my photos so I'm just going to make all the bad guys pupil-less!' chaos. I'm sure you can guess into which category Miss Peregrine falls, or rather plummets.
This might one of those exceedingly rare cases where the ridiculous phrase 'one's greatest strength is also one's greatest weakness' is accurate. The strength of this story is the integration of the photos and, to some extent, the inspiration the author drew from them to shape the story. But that is certainly also a serious weakness, because if those photos are the bones on which the flesh of the story is hung, it resembles no skeleton I've ever seen—it's all a-jumble, haphazard, ad hoc. The author mentioned in an interview included at the back of the book that he's worked in the T.V. and film worlds, which I paradoxically find hard to believe (surely no trained film writer could get away with such clumsy exposition, where after a certain point the main characters just sit around for ages and, essentially, say 'on camera' everything the reader must know for the story to make sense?) and all too easy (the brainstorming 'hey, let's make the monsters have lots of tongues and stuff cause that'd look cool!' kind of aspect).
So I'm deeply ambivalent about the creative process out of which this book sprang, fully if bizarrely formed. On one hand, it's a true pleasure to read a story integrated with (as opposed to merely decorated with) visual stimuli. But to let said stimuli shape and limit the story feels like kind of a questionable move. Sequels are planned, but now the die is cast and all the silly, totally arbitrary rules Riggs made up off the cuff while looking at his photographs are set in stone, and he has to try to write himself out of the consequences of those haphazard decisions in later books. For myself, I hope he succeeds, because despite its faults, Miss Peregrine was great fun and a unique experience!

Bonuses: +1 for having photos and +1 for seamlessly integrating them into the story/text

Penalties: -1 for huge slabs of rather clumsy exposition, -1 for the 'hey, that'd be cool!' vibe in making of the rules of the world, -1 for failing to deliver, characterization-wise, any of the Groundhog Day-esque dividends one might reasonably expect from the time anomaly plot device

Nerd coefficient: 6/10   "Still enjoyable, but the flaws are hard to ignore"

Before you get on my case for unnecessary harshness, know this: 6/10 is actually pretty good!