Pretty big week in the land of comics.  I had the good fortune to attend the midnight release of Walking Dead #115 at my local LCS and was able to pick up my weekly reading pile at 12:01am.  As I was excited about having my grubby hands on my books so early, the old father of two in me took over and I quickly fell asleep upon arriving home.  I woke excited to dive into the Walking Dead, Sixth Gun, Infinity, and the other treasures I scooped. 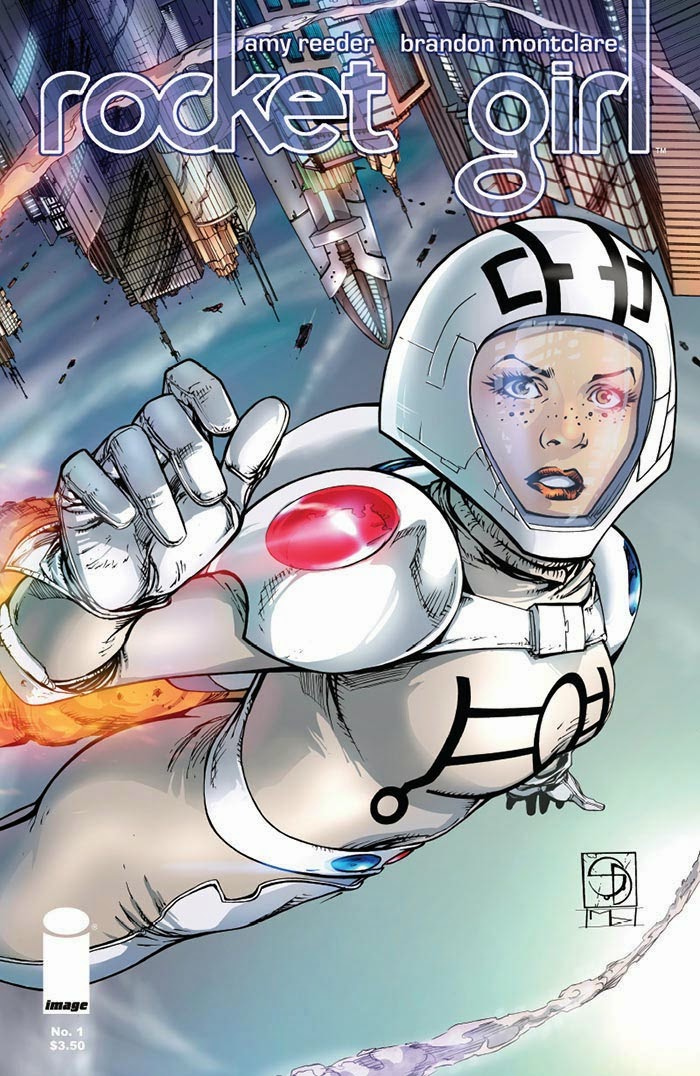 Pick of the Week:
Rocket Girl #1 - Amy Reeder and Brandon Montclare deliver a gem of a first issue with Rocket Girl.  Dayoung Johansson is a police woman from the future.  She is only 15 and has traveled back in time to the year 1986 to prevent Quintum Mechanics from producing the Q-Engine.  Upon arrival, she passes out and has an equipment malfunction.  Dayoung is now trapped in 1986 New York and has full knowledge of the past in which to use to assist the police.  Rocket Girl provides an interesting concept and is already full of colorful characters that I hope are fully fleshed out.  The art is stunning and the creative use of panels really contributed to the chaotic action of Dayoung zooming with her rocket.  The humor is timely and it is refreshing to see a strong 15-year old female protagonist.  Well done.

The Rest:
The Walking Dead #115 - The calm before the storm is upon us.  Carl and Andrea are holding down the fort while Rick leads the three factions united against Negan and his men.  The bullets have been made, Rick gave his pregame pep-talk, and the march is on.  Negan has a trick up his sleeve and I have a feeling all hell is going to break out next issue.  Looking forward to this arc.

Infinity #4 - I have to hand it to Jonathan Hickman, this was the issue that got me hooked once again on this series.  Captain America and Thor attempt to negotiate peace with the Kree, but with the builder backing them they are not to be trusted.  Thor pulls some trickery and it looks like there is some hope.  Black Bolt has a brutal battle with Thanos and unleashes a scream that unlocks sleeper inhumans across the globe, including Thanos' son Thane.  This should lead to a somewhat substantial change in the Marvel Universe.  Hickman seems to be a fan of the slow build and I feel like it is starting to pay off in this series.

Sixth Gun #35 - Becky is shocked upon stumbling onto the world that she created with the six during her ghost walk.  She quickly learns the price that one must pay for wielding the six and the burden that rests upon the one who rebuilds the earth.  Meanwhile, Cobb and the rest of the crew trying to fend off the skinwalkers are successful in protecting Becky.  Lady Hume goes back to Griselda for help, but Griselda has different plans in her quest for the six.  Becky is able to finally wake up from her ghost walk, but she is a changed woman.  Shocking ending and Bunn delivers once again.

Artful Daggers #8 - ComiXology has weekly sales were select titles are only $.99.  While the sales are normally a great deal, Artful Daggers is $.99 everyday and has been a fast paced thrill ride from the start with some of the most unique art you will find in comics.  The Tricksters demonstrate how they earned their name and the reputation of maintaining power for so long.  Things are not looking up for the Tricksters, however, as the First of Cornwall appears to be in on the attempt on the Tricksters so they have the daunting task of dealing with three organized groups of opposition.  Looking forward to issue #9!

Batman #24 - Zero year picks up with a double-sized issue following the month off for Villain Month.  Scott Snyder continues his take on Batman's origin as his confrontation with Red Hood and his gang reach a boiling point.  Red Hood's gang are stealing a large assortment of chemicals with plans of detonating them across Gotham on the anniversary of the death of Bruce Wayne's parents.  Batman has other plans and confronts Red Hood at ACE Chemical.  I am guessing we are seeing the origin of the Joker, but time will tell.  As Bruce reflects with Alfred on the progress the two have made the Riddler turns off the power on Gotham.  Looks like we have the foe for the new arc.
Posted by Mikey N at 2:00:00 AM