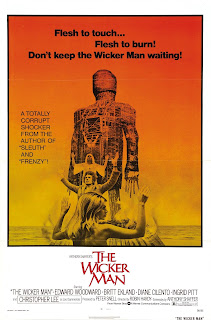 In The Wicker Man, a British police inspector played by Edward Woodward receives a letter informing him that a girl named Rowan Morrison has gone missing from a community on a remote Scottish island, and he goes to investigate. But when he arrives, he is told that no one has ever heard of any girl named Rowan Morrison. He finds her mother, and she informs him that she never had a daughter named Rowan. He goes to the school, and is informed that there has never been a student there named Rowan Morrison. But there's an empty desk, and he finally discovers the class roster, which has Rowan's name on it. These are the makings of a pretty good mystery, but what adds a level here and lends the proceedings an undeniably creepy air is that this island is entirely pagan, led by the polite but intimidating Lord Summerisle (played by Christopher Lee), and they are preparing for their May Day celebration. Traditionally a time of human sacrifice...

I first came across The Wicker Man many years ago on a list of The Most Terrifying Movies of All Time, so I sought it out. I didn't find it to be terrifying. I also didn't find it to be good. See, Woodward's character, Sergeant Howie, is a devout Christian and much is made of him being an adult virgin. The first time I watched the movie, I felt like it was making sport of Howie and his beliefs. He's not the most sympathetic character – pushy, belligerent, uptight – and as an interloper who comes into a closed community and stomps all over their beliefs, I wasn't exactly rooting for the guy and felt like he was almost a caricature of a Christianity. But a couple of years later, I found myself wanting to watch The Wicker Man again, and I tried to look at it afresh. I realized that this movie wasn't about who was "right" or "better," the pagans or the Christian, but this is a movie about things that are very old. It's hard as an American, with our country still so young, to fathom the conflict that has played out in Europe over the last two thousand years, as traditional pagan beliefs collided with Christianity, and how that struggle both defined and continues to define so many aspects of life. I find that struggle very interesting, and the way this movie deals with it is particularly compelling. At this point, I've seen the movie maybe a half dozen times and every Halloween season I feel myself drawn back to watch it again.

There is some controversy over the many versions of this film, which bears mentioning. As the film was being finished, either the production company or the distributor was in financial trouble and also hated the film, so they attempted to dump it. Director Robin Hardy's original cut was variously given as either 99 or 101 minutes, and the studio cut it down to 88 minutes. This is the version that is the most widely available. There is a 99-minute version that is very difficult to find, and the restored 11 minutes of footage came from a 1" tape master that I believe was found at a TV station somewhere. Those 11 minutes look like hell. It's a better version of the film, but suffers in visual quality. However, if you live in the UK, this month you are lucky enough to be able to see The Wicker Man: The Final Cut in theaters or on blu-ray. The original negatives and prints of the film were destroyed in the studio's financial collapse, and there is a story that they were eventually used as filler on the M5 motorway in Somerset. The runtime on this new version splits the difference between the two previous incarnations – which is probably the ideal length for this movie – and the missing footage was restored from a print found via a public hunt for materials using Facebook. The entire film has been scanned in 4K and cleaned up, and it looks amazing.

Bonuses: +1 for its stunning job of creating an eerie, unsettling atmosphere almost entirely in broad daylight; +1 for having the ability to draw me back even after not liking it on first viewing

Penalties: -1 for knowing that (unless you get the new UK blu-ray), any version you see is going to be an incomplete viewing experience

Cult Film Coefficient: 8/10, well worth your time and attention

Read about our scoring system here.
Posted by vkotrla at 8:45:00 AM