Apple was in the spotlight yesterday, not only for their newly announced products, but for their stance on Matt Fraction's Sex Criminals.  As of this writing the comic was "under review" and not available digitally from Apple.  You can still purchase the comic from ComiXology, Kindle, or Google, but Apple is intent on playing morality police and restricting what comics it sells.  While you can still get the comic on the ComiXology app, you can't purchase it via Apple's iOs.  Hopefully these types of shenanigans won't be a trend with Apple.  This is the second comic (Saga) of recent memory that was restricted by Apple. 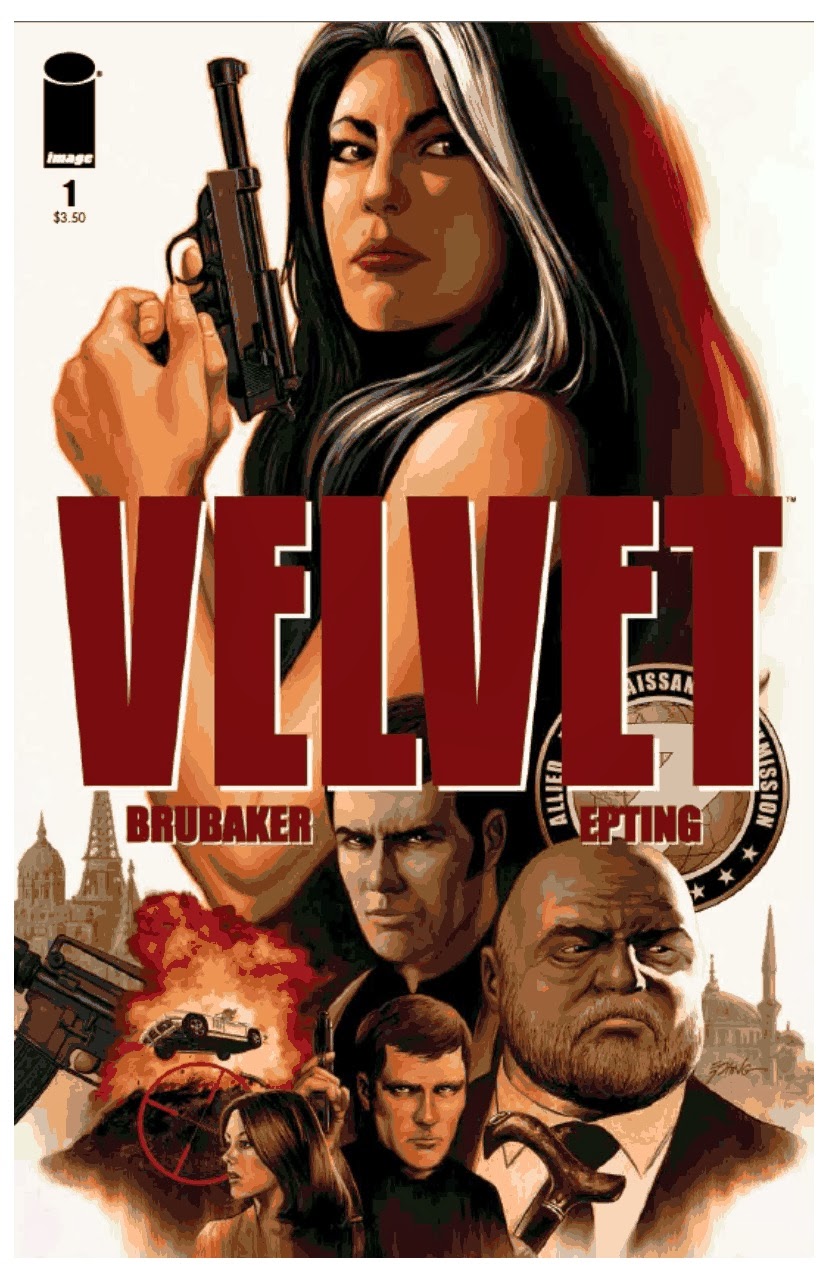 Pick of the Week:
Velvet #1 - Ed Brubaker has done it again.  He is bringing a unique twist to the crime/mystery comic. The personal secretary, who is in possession of key information, turns out to be less of a traditional administrative assistant and more of a spy herself.  She is privy to unique information on many operatives, and when one of their own is killed on a mission, the hunt for the mole is on.  The first issue feels like the WWII-era Captain America books that Brubaker wrote and if you have read any of the Criminal series then you know how able he is in regards to writing about crime.  Really excited about this one.

The Rest:
Mind MGMT #16 - Matt Kindt continues to weave an interesting tale that is one of my current favorite ongoing series.  This issue is a stand alone that provides a chilling background to the eraser.  Kindt's ability to push the comic medium is second to none and I highly encourage anyone who enjoys a good mystery to pick up this title. A sci-fi story that occurs on the perimeter of the pages leaks into the issue to take the storytelling to the next level.  Kindt is one-of-a-kind and I hope his imprint on the world of comics is lasting.

The Massive #16 - I decided to see if I could resume reading this title from Brian Wood after taking a break from its impressive debut.  This week's issue is part one of a new three story arc entitled "Longship".  Callum discovers an old friend has helped with the resurgence of the whaling industry.   Whales are not endangered and provide many needed resources following the crash, but the Massive and Callum are intent on stopping it.  Looking forward to seeing how this develops and glad I returned to this title.

Daredevil #32 - Murdock is not fooled by the Jester's trick, but needs to get to the bottom of the Sons of the Serpent and figure out a way to stop the riots in New York.  A tip from Foggy leads him to Kentucky where a seemingly normal cab ride leaves him in some monstrous company.  Nice to have an occult feel around Halloween, Waid continues to deliver the goods on this Eisner winning series.

Pretty Deadly #1 - Another impressive debut from Image Comics, Pretty Deadly pairs the supernatural with the wild west.  The daughter of death, Ginny, is seeking a missing page from a diary.  The story is narrated by a pair of traveling minstrels, Sissy and a blind man named Fox.  Packed with intrigue, magic, and the west, this book has a very Sixth Gun feel to it.  That is a compliment and I look forward to reading more.
Posted by Mikey N at 4:00:00 AM