Microreview [book]: A Dance of Cloaks by David Dalglish 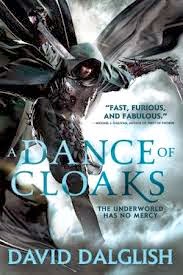 
Since childhood, I have always loved stories incorporating thieves. There has always been a big part of me that has enjoyed watching protagonists succeed (or barely survive!) through a combination of wits and sheer luck instead of overwhelming physical or mystical power. While figures like Raistlin Majere in the original Dragonlance series would capture hearts and minds of readers everywhere, I always identified more with the enigmatic Kender, Tasslehoff Burrfoot. Likewise, the Fritz Lieber classic, Fahfrd and the Gray Mouser, to this date still owns a small village in my heart. And more recently, Scott Lynch's Gentlemen Bastards series has been rekindling my love for this type of fantasy fiction. So it was to my delight that I learned of David Dalglish's A Dance of Cloaks, a story which seemed to combine my love or thieves guilds with the grittier, darker background that pervades modern fantasy. Dalglish admits being heavily influenced by George R.R. Martin's A Song of Ice and Fire, and was inspired to create a world where no character is safe. At first glance, this looked to be just the type of book I needed to sink my teeth into.

A Dance of Cloaks weaves together three main stories. The first centers on Thren Felhorn, the greatest thief and assassin of his time. Thren wrestles control over the various thieves' guilds in the city of Veldaren, and is in the midst of a war against the Trifect, an alliance of wealthy and powerful nobles. The second story concerns Aaron Felhorn, the main protagonist of the story. As Thren's young son (he starts the story as a wee 8 year-old), Aaron is being groomed as heir to his father's thieving empire. In the process, Thren tries to destroy his son's emotions, isolate him, and mold him into the perfect killer--a dark, emotionless leader who inspires fear throughout the city. But through various chance meetings, Aaron glimpses a world beyond the iron control of his father. The other main story focuses on the Gemcrofts, a noble family that is part of the Trifect. It features the relationship between clan head Maynard Gemcroft and his willful young daughter, Alyssa, who makes choices that could have dire consequences for their family.

Though the world Dalglish builds is noticeably influenced by the darker turn in fantasy, at its most basic level it has a Tolkein-esque quality, and feels similar to much fantasy produced in the 1990s. Elves populate the world, but they take remain backstage in this story. In Veldaren, humans take center stage. And the human heart appears to be the battleground between good and evil, represented by the rival religions of Ashur and Karak. Although Dalglish does not foreground this trope of good vs. evil directly, it remains central to the overall world/city of Veldaren. Good is revealed through small acts of kindness instead of purity of heart, whereas the tendency toward greed, profit, ambition, and hatred (in a word, evil) remains ascendant.

A Dance of Cloaks is a fast-pace and frenetic thriller... one that at the very least never gets boring. The plot takes the reader through a number of twists and turns throughout the rat maze of Veldaren, traversing the castle, the wealthy nobility, and the slums and whorehouses. In the process, Dalglish does a great job of bringing the dark and grimy city to life. At the very least, the city feels authentic.

Much less so do the characters. Granted, two main characters--Alyssa and Aaron--do experience character growth throughout the course of the story, but I strangely never found myself rooting for either of them. In fact, I found it hard to identify with all the main characters (although, I did like Senke and Zusa, two side characters). Thren is a homicidal sociopath, one who cares more about his legacy than anything else. Aaron, we learn, is no less crazy. His difficult upbringing created in him a split personality between Aaron (the homicidal, immoral heir to his father's empire, and one who wants to do his father proud) and Haern (the homicidal, immoral boy who wants to do good and live a normal life). This split personality made him more weird than compelling. Nor did I identify with Alyssa, who in many ways seemed a caricature of Sansa in A Song of Ice and Fire.

More problematic are the strange choices that characters make throughout the course of the story. The cunning and wary Thren is embroiled in a plot to seize control of the city from the Trifect and the King, yet he seems more than willing to throw those plans away at the drop of a hat. For instance, after Kayla (an unknown entity both to Thren and his Ash Guild) saves Aaron from certain capture and possibly even death, Thren rewards her almost immediately by making her one of his right-hand (wo)men. Does this make sense? One would think a leader as cautious as Thren would have kept a more watchful eye on Kayla, just to make sure she did not have ulterior motives or wasn't sent by the Trifect. And at other times, despite Thren's plot to control the whole city, Thren at times is willing to engage in single, man-to-man combat. Why would Thren do this, when losing his life would threaten his long term plans for himself and his progeny?

Perhaps my biggest problem with this book was that at times, it felt dark just for the sake of darkness. Now I do like gritty fantasy (or grimdark, as it has come to be called), but generally prefer that the world's overall grit serves a broader purpose. At times, A Dance of Cloaks seemed to feature some of the more problematic trends in grimdark--the grit is merely there to show the reader how gritty the world is. For example, the torture scene near the end. What purpose did that serve? Just to show how murderous and barbarous a city Veldaren actually is?

In the end, A Dance of Cloaks is a problematic book, but an enjoyable read nonetheless. And given its interesting themes, dark tone, and fast pacing, this book will most definitely find a loving readership. Unfortunately, this was not the thieves guild book I have been waiting for...

Penalties: -1 for the main characters; -1 for their unbelievable choices; -1 for meaningless brutality