Happy Halloween!  I hope you all were able to pick up some free comics this past weekend during Halloween ComicFest.  My family had a nice time and we were able to pick up some additional bundles of the comics to hand out tonight.  I doubt it was a coincidence that we were graced with Neil Gaiman's return to the Sandman this week.  How refreshing it is to return to that world.  I attempted a reread this summer that fell short, but was very enjoyable. 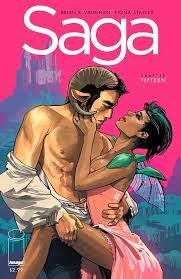 Pick of the Week:
Saga #15 - I am not sure how Brian K. Vaughan does it.  This issue of Saga demonstrated the brute force of the Robot family, how in the midst of chaos pleasure can be found in simple things, and how some people never seem to catch a break.  I most enjoyed the simple moments of pleasure that Marko, his mother and company got from playing Nun Tuj Nun!, a Wreath board game that resembles Cranium.  Just when this book gets you to lower your defenses during the Psyche-Out round, tragedy strikes the Will.  I would never have guessed I would care so much about this bounty hunter when I was introduced to him.  Vaughan does a masterful job of creating complex characters that live in the grey.  I don't think it is fair what he is doing.

The Rest:
The Sandman Overture #1 - Neil Gaiman has not missed a beat from the conclusion of his opus until now. I was filled with equal parts trepidation and excitement to dive into this title and I am pleased to say that it is classic Sandman.  Gaiman weaves a beautiful tale and leaves us with Morpheus in imminent danger. Destiny and the Corinthian pay a visit and Dream's sister may be planning to end him.  Perfect read on a Halloween night, I may just have to reread this after dealing with my trick-or-treaters.

Captain America: Living Legend #2 - Still enjoying Andy Diggle behind the wheel of Cap and this week was no different.  The book maintains its Cold War feel as Cap is taking on Volkov and the living technology of the D.E.U.S. Project.  Well written, classic Captain America feel, and very realistic art remind me why Captain America is my favorite superhero.

Power Puff Girls #2 - The power of this title in comic book form is that it maintains the campy feel of the television show, but is able to provide more depth.  Mojo Jojo is subjected to chemical X and finds himself as the professor's lab monkey for the second time.  Hijinks ensue as Mojo is almost more formidable as an out of control monkey and upon witnessing the power of second chances, the devil utilizes mind control and sends more foes after the girls.  Simply a fun title.