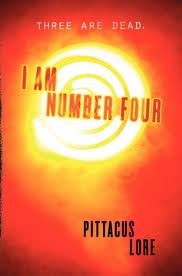 Oh lordie, where to begin. I guess I'll wade through the mediocre muddle of the story-line first, before I reveal the perplexing paradox (awesome alliteration so far, no?) whereby the book and movie each manage to fail in very different, in fact medium-specific ways.

So, the plot, as it was no doubt intended to be understood: yet another superhero story...but with a twist! This one's unique (supporters might rant) because it's about aliens, and plus there's a mystical charm on the nine Loric (the good aliens) superhero survivors of the bad aliens' attack, whereby they can only be killed in order of their number. Once they grow up and come into their various powers, the reader/viewer can have no doubt they'll easily defeat the bad aliens, which brings us to the first of, sadly, many colossal flaws to the story: since the superhero survivors are evidently being scripted into a 'triumphing against impossible odds' kind of story—or in other words, they're going to be friggin' amazing once they get all their powers, since even halfway to full potency they're pretty tough—how on earth did an entire planet of these heroes get trounced by the bad aliens in the first place? I mean, there were millions of them, right? And it's not like the bad aliens attacked with nukes or something—they attacked with really big 'beasts'. I don't know about you, but how many superheroes with powers like telekinesis and weather control (i.e. lightning and stuff, not unlike Storm from the X-Men) would it really take to handle one giant beast?

And what is up with the totally half-hearted environmental theme, anyway? Ages ago, apparently the planet Lorien was too heavily exploited by its inhabitants for its resources, which destroyed the balance of nature, so they 'evolved' and morphed into two distinct classes, the planet-guarding Garde (that's the superheroes; I wonder where that word came from) and Everyone Else (each Garde gets a totally mundane person as, essentially, a chaperone/teacher).  First off, how much would it suck to get born into the crappy underclass of Ordinary Schmuck? But no, the narrative insists that everything on Lorien was idyllic and wonderful, no conflict at all! Yeah, right. If the Garde had any scrap of human nature in them, they'd immediately set themselves up as overlords of everyone else, ruling as little feudal lords over their individual domains, and anyone without powers would be a mere serf.

Here fanboys (and/or fangirls?) of the series will probably leap to the attack, insisting that I just don't understand how awesome the Loric are, that they live in perfect harmony, they're not tainted by human selfishness, etc., and perhaps that's true, but if so, they'd be so utterly unlike human beings that meaningful interaction would be impossible, and yet the entire story is (another Massive Problem) about Number Four, a.k.a. 'John Smith', struggling to find a place for himself in small-town America—in high school, of course—and soon falling in love (with an ex-cheerleader, ex-girlfriend of the primary human antagonist and, inevitably, football quarterback Mark). And the ways John reacts to jealousy, etc. are all too human. In other words, the author of this series claims these aliens are way wiser and cooler than humans but the actual portrayal of said aliens presents them as exactly the same as humans except for the powers that come at or after puberty.  Sound familiar?  Sure did to me: it's like pretty much every other superhero story ever. An ordinary boy—it's almost always a boy—hits puberty and gets extraordinary powers (cigar-smokers like Freud might well claim all this stuff about superheroes is a mere metaphor for the awakening of male sexual potency), so suddenly the tables are turned on his social tormentors and he finds a niche for himself in the scholastic jungle of high school, and also falls in requited love with a girl who loves him even after she learns the truth. There are two main themes at work here: Revenge of the Nerd (Spiderman beats up the bully, Harry Potter hexes Dudley, etc.) and Impossible Love (superhuman man meets human woman and their love will last for all time!, i.e. Edward and Bella, etc.). Both of these plot-tracks are, needless to say, exceedingly well furrowed, with dozens of high-profile stories utilizing each. I wish the author of the I Am Number Four series had taken Robert Frost's message to heart: wouldn't it be nice if one of these days we get a superhero story that takes the road less traveled by?

Some might object that there are original elements to the story, like the protective charm ensuring they can only be killed in order, or the nature of Loric society (see above). And this is the Paradox: all the original ideas, up to and including the good vs. bad aliens thing, and especially the 'kill us in order' mumbo-jumbo, make no sense and are almost irrelevant to the main drama, which is about a very human(-esque) boy's transition into adulthood via social acceptance (he stands up to a bully and makes a friend) and success in romance (he gets the girl). It's as though the author just wanted to do another version of this Monomythic tale, but felt pressure to make it 'original' so tacked on some nonsense about aliens and charms and whatever.

You've probably guessed by now that I didn't exactly warm to the story. It wasn't badly written per se—if anything, it was above average stylistically—it was simply a bad story. What's fascinating to me, though, is how the movie adaptation paradoxically failed (or so I strongly felt as I watched it) for different reasons. The movie dispensed with a lot of the less plausible aspects of the story (non-Garde Loric are basically totally defenseless in the book, but in the movie they're 'warriors' and even have weird glowing scimitars) and telescoped things down, making what I felt were significant improvements in the story-line and in pacing (for example, a key character suffers a rather major mishap earlier, which serves as the impetus for others to continue the fight). Yet I liked the movie no better than the book. How is this possible?
Well, my instant and visceral dislike of the blonde, cleft-chinned square-jawed hulk, a veritable ubermensch, selected to play the role of John didn't help. What were the producers thinking? Superhero movies are supposed to be cathartic for the ordinary viewers, offering the hope that you, too, ordinary boy, might someday discover you have extraordinary powers, a premise that's pretty much out the window if the 'ordinary' boy looks like a golden god. It calls the Girl's intentions into question: it is no longer clear that the Girl has the emotional depth to fall in love with him because of his pure nerd heart, since he's exactly the kind of man-boy eye-candy a shallow cheerleader type might well shack up with too! Worse yet, everyone in the movie is gorgeous (even Sam, the token nerd) and many are blonde—the Love Interest (whose name I have already forgotten, like much of this forgettable tale), and Number Six as well. Did the movie-makers somehow jump to the conclusion that the target audience for a movie of this type is comprised entirely of blindingly attractive high school jocks and cheerleaders? If so...fail.
So while the book paradoxically failed because of the very twists and unique elements that set it apart from the tried-and-true superhero story, the movie improved on that bad original story to focus on the core drama of the awakening superhero and his romance, yet paradoxically failed anyway because they made everything and everyone too pretty, too blonde, too boring. If you desperately want to watch a movie about high school students who acquire superpowers, watch Chronicle—it's waaay better, both as a movie and as a story (and as an added bonus, the main character isn't pretty at all, but rather looks like a bona fide—even kind of creepy—nerd!).

Bonuses: +1 for leaving open the possibility in the reader's mind that John Smith and the other characters might just be nondescript rather than supermodels

Penalties: -1 for the ridiculous protective magic (whence the tagline "Three are dead—I Am Number Four," but should have been "Superhero Beats up Jock, Meets Ordinary Girl—Mad Chemistry"), -1 for all the other stupid alien stuff

Nerd coefficient: 4/10 (This book is Number Four. I wanted to give it and the movie a 3, but how could I, given the title?)

Bonuses: +1 for simplifying the alien stuff and downplaying the magical protection, etc. to focus on the human drama

Penalties: -1 for having everyone be so friggin' beautiful and un-nerdlike

[These scores aren't so hot, but they're probably not as low as you think: see here for more info]
Posted by Zhaoyun at 12:01:00 AM