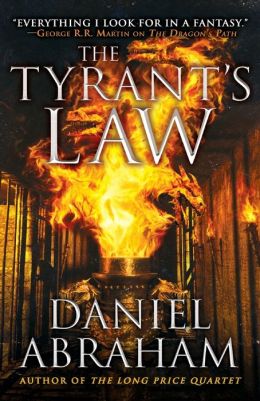 I've been on a bit of a roll with fantasy lately, going from strength to strength with Douglas Hulick's excellent Among Thieves and Elizabeth Bear's mesmerizing Range of Ghosts (review forthcoming). So I guess a little part of me expected to be disappointed by The Tyrant's Law [Orbit, 2013], book three in Daniel Abraham's epic fantasy series The Dagger & the Coin. After all, though I loved The Dragon's Path, I felt the wheels came off a bit in The King's Blood, and it wasn't clear to me whether Abraham would get the thing back on track. Fans of the series will be happy to note that The Tyrant's Law is easily the best installment in the series, and marks Abraham as an unusually daring and thought-provoking fantasy author.

In the aftermath of Antea's victory over Asterilhold and the crushing of Dawson Kalliam's rebellion, the world has suddenly become a much creepier place. Basrahip, High Priest and advisor to Palliako, claims that Kalliam only rebelled at the behest of the chitinous-skinned Timzinae, one of the twelve additional races of humanity created by the dragons who once ruled the world, and the alleged "loyal servants of the dragons." Their supposed purpose? To stop the re-emergence of the Goddess, who the priests claim was thwarted into hiding by the "evil" dragons.

Geder Palliako's armies, aided by the priests of the Spider Goddess, have therefore set their sights on Sarakal and Ellesai, where the Timzinae predominate. Unfortunately, the race war that ensues doesn't go the Timzinae's way. Oh, and Cithrin--the young Magistra for the Medean Bank who once saved Palliako's life but then kinda freaked and hightailed it out of town when he executed someone right in front of her? She's been sent to apprentice at a bank chapter run out of a city in Antea's crosshairs. Uh-oh. And there's no Marcus Wester to keep her safe either--after all, he's gone off with ex-priest/actor Master Kit to find something to kill a big spider with.

There are two ways to read The Tyrant's Law. One is as a middle chapter in an epic adventure told through multiple character perspectives, a la George R. R. Martin. In this sense, the book largely succeeds. The characters are brilliant, the story well-paced and the writing is crisp and engaging. Cithrun, Marcus, Yardem and Kit are as likable as ever, and I'm also happy to say that the Clara chapters (which had an annoying Cataelyn Stark-goes-Downton Abbey feel to them in The King's Blood) are hugely improved. She has a more complex subjectivity now, and Abraham takes her story arc to interesting places.

That said, some of the problems endure. The world, for one, still feels a bit threadbare--characters travel across wide, featureless expanses as if by express rail or teleportation. And the thirteen races of humanity remain an interesting but underdeveloped idea (though The Tyrant's Law does more to rectify this than either previous installments in the series). Of greater concern were the occasions where I couldn't really figure out what motivated the characters (Cithrin especially) to make certain pivotal decisions. And I found myself wondering (again) if these moments are sacrifices of Abraham's prolific pace of writing. After all, managing two single-authored and one co-authored series that are being published concurrently, and yearly, is a tall order for any human being. While it's a testament to Abraham's skill as a writer that this series is as good as it is, I think it's fair to say that he might be spreading himself a bit thin.

There is, of course, another way to read The Tyrant's Law--as a novel of ideas. The genre doesn't exactly produce a lot of these, but it does happen--see, for example, my reviews of Sapkowski's excellent Witcher books. As the title implies, The Tyrant's Law is a meditation on tyranny. This in and of itself isn't all that unique--gritty fantasy is already full of stand-ins for sadists like Vlad Tepes and bloodthirsty conquerors like Timur the Great. But the nature of that tyranny, and the horrors that stem from it, feel distinctly modern in this case.

Antea, after all, seeks not only to conquer the world, but to "cleanse" and remake it. And when I say "cleanse," I mean "of all those whose blood is supposedly tainted by association with the dragons" (there's an irony there, which will be evident to anyone who reads the book). That association is conceived as both collective and as an immutable consequence of birth, rather than belief, while the mission, so to speak, is to completely and utterly remove that taint in systematized fashion. This is a thoroughly modern way of thinking, and stands in stark contrast to the unsystematized, "sack-and-slaughter" violence of pre-modernity. Even the language used by the cultists to sow the seeds of distrust and enmity towards the Timzinae are familiar to students of the 20th century--"roaches" was in fact a term used by Hutu Power to dehumanize Tutsis, while accusations of collective guilt for phantom "conspiracies" were central to the experience of Jews under Hitler and Kulaks under Stalin.

The victimization of the Timzinae takes place in stages, much as Hitler's victimization of Jews began with harassment, moved on to a curtailment of rights, proceeded to ghettoization and devolved into mass slaughter. We watch, powerless, as these discourses spread across the population, infecting otherwise good people until there are very few left who do not accept them as truth.

It's true that genocide is the ultimate grimdark endgame, and those who weary of all the grim darkness may balk at reading about this kind of thing. But let me say this: Abraham takes us down this path to hell with a minimum of gore. There are no extensive flaying scenes, no graphic rapes or highly detailed descriptions of organ matter being removed from the body. The restrained approach is refreshing, and still highly effective at inducing a sense of dread.

One thing did trouble me, though. Palliako has to this point been presented as a fairly likable and relatable guy, an affable, bookish sort who gets bullied around a bit and probably reminds you of a bookish sort you know, if not yourself. We're clearly supposed to like him and sympathize with him, yet be simultaneously repulsed by what he ends up doing. I see two purposes to this approach: to suggest that "pure evil" is a fiction and to argue that we create our own monsters from decent folk.

Abraham explores this territory deftly, but I can't help but find it problematic in some respects as well. Even if we just stick to the psychological side of things (and ignore sociological, historical or economic factors), tyrants of this sort tend to come in two varieties: extreme zealots (e.g. Hitler) and paranoid sociopaths (e.g. Stalin). Geder is neither. He isn't even a sadist, the kind of who enjoys the personalized violence of rape or torture. So what, exactly, is motivating him? Abraham gives some answers (which I won't spoil for you), but I found them unsatisfying--reinforcing the general criticism of character motivation.

Leaving heavy topics like racial stigmatization and the nature of tyranny aside for the moment, I should mention that there's a scene at the end of the book that potentially changes everything. Or, at least, I think it changes everything. It's the kind of ambiguous cliffhanger you might find on a show like Twin Peaks or Lost. If I'm right about what it means (and I'm increasingly convinced that I am), then Abraham has done something extremely clever starting way back in The Dragon's Path, and done so with enough subtlety that it would be very difficult to pick up on until now. I'm chomping at the bit to see if I'm right.

The ending is, in a way, emblematic of what makes this series so good, and so addictive. Sure it has its problems, and some are fairly serious, but The Tyrant's Law has considerably more strengths than weaknesses, and gets bonus points for having something legitimate to say about human nature. That marks The Tyrant's Law as an unusually smart installment in an unusually likable fantasy series.

Bonuses: +1 for doing more than just telling a good story; +1 for OMG the ending!

Penalties: -1 for character motivation issues; -1 for the persistent lack of geography.

Read about our scoring system, in which a sufficiently random sample of books would normally distribute in a bell curve around a mean of 5, here.
Posted by The G at 12:00:00 AM