Man...or Astroman? (And some stuff about the nineties, Bakersfield, and sci-fi) 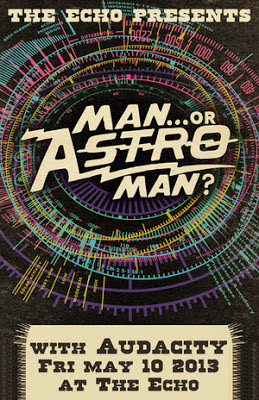 In lieu of the review of something or other that I had planned for today, I’m going to take this opportunity to promote Man…or Astroman?’s show at The Echo tonight. If you’re in Los Angeles, if you’re a nerd who likes good music, you should be going to the show.

But I’ve got to write more than something this. Promoting the show tonight does not qualify as a “substantive post,” which is the name of the game around here.

Though my friends and I—all transplants from Bakersfield to LA—will talk about our upbringings as culturally deprived, Bakersfield wasn’t that bad of a place. But there were three reasons for which you would go to LA. Partying. Shows. Shopping.

By shopping I mean comics and music. Though Bakersfield had a few semi-decent records stores and a comic shop that’d let you order from Previews, these places couldn’t offer what Golden Apple or Amoeba did: The possibility of discovery! 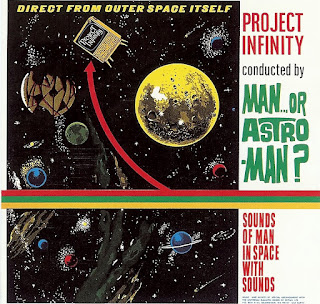 This is how I came across Man..or Astoman? A friend of mine was going to UCLA at the time. I would come as often as possible—which, sans car, was not very often. We’d drink beer in Westwood all night and shop all day. On one of these weekends, I picked up the band’s second album, Project Infinity, at Aaron’s Records. I had never even heard the band’s name at this point. Plus, it was vinyl, which was a rare buy for me. (CDs. It was the ‘90s.) But there was something about the Kirbyesque, retro-future cover that drew me in.


That album changed my life. It turned me on to surf rock, which caused me to become a half-assed guitarist. Since Man…or Astroman? was associated with two music scenes—surf/garage (the Mummies, Untamed Youth, Los Straightjackets) and the weirder, lesser know Southern indie scene of the time (Servotron, The Causey Way, Rock*A*Teens)—I soon found a world of music in that dismal era between grunge and whatever the kids listen to these days. Much of this new music caused me to become a half-assed computer musician. The band also drove my internet use in the days of AOL. The listserv devoted to the group comprised 50% of my online activity. Let's not get into the other half.

The album also turned me onto sci-fi imagery and themes. Not reading sci-fi novels or anything like that. Just the imagery.

Why sci-fi? So many of these bands had B-movie back stories: Supernova and Servotron, as well as Man or Asrtoman? Why was science fiction theatrics and imagery so appealing? I can’t speak for the band—my guess is that they’re nerds. And I can’t really speak for myself either. I had never been a sci-fi fan. I grew up reading Marvel Comics, but when I started reading novels as a teen, I choose horror and crime instead of sci-fi and fantasy that many drift toward. I had never sat through an episode of Star Trek, I never read Ender’s Game. I worshipped at the altar of Star Wars as a kid, but back then few kids did not.

But despite my lack of interest in sci-fi, Man or Astroman?’s thematics appealed to me, as did Mystery Science Theater and Michael Allred’s Madman. It was retro-futurism, the camp of the sci-fi of the fifties and sixties, particularly the movies. There is something wonderfully naïve in these films, naïve because history had proven their fears of nuclear annihilation unwarranted. But there’s also an optimism, a belief that the future would be wonderful, society perfected. Jetpacks. If World War 3 didn’t interrupt progress. 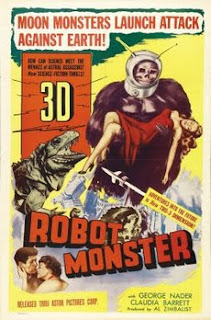 In the nineties—the era of sarcasm and the death of the definition of “irony”—this naïve optimism contrasted sharply with our own too-cool disillusionment with modernity, with even post-modernity. We had come to the end of history, and found it that it sucked. The nineties had little of today’s triumphalism, the constant lauding of how awesome and connected things are today. Networks and such. This is an era that has little time for the past. The past is still mined—we’ve gone through the eighties over the last few years—without the conscious, often celebratory nostalgia that accompanied nineties retro. Is anyone actually looking longingly at the eighties? Nineties surf bands with sci-fi personas was an homage to a simpler time. Granted we looked pretty condescendingly on the past we adored—we were being sarcastic, after all—but it was that hopefulness, the youthful optimism of the early sixties that appealed to us. It was the opposite of our present, it was a world of beach parties and favorite Martians.

I guess what I am trying to say is that I miss the nineties. Tonight, Man…or Astroman? will give me a brief moment of nostalgia of a nostalgic moment. Or they will more likely make me feel old.

I did read the reprints of Weird Science and Weird Fantasy as a kid, which I preferred over EC’s horror books. That probably explains the appeal of Project Infinity’s cover.