Tales from a Board Gaming Convention: Geekway to the West

This past weekend I had the pleasure to attend Geekway to the West, a board gaming convention in St. Louis.  These past few years I have found myself attending more and more conventions, but I have yet to attend a gaming specific convention.  A couple of my friends tweeted about attending Geekway and I decided that sounded like a fun idea.  I must say that I am very happy I gave it a go.

I made the three hour drive from my home to St. Louis on Friday and arrived at the convention 5 hours before my friends would make an appearance and did not no a single soul at the convention.  I nervously picked up my badge and was given the basic info on how to check out games, win prizes, various tournaments that were taking place, and a schedule of events.

After cruising the library of over 800 titles to select from, I decided to cruise the main ballroom to find a flag for a group of gamers looking for additional players.  Oddly enough the first group I joined was playing a homemade game (although very well made).  They informed me that other players had sat down only to leave, but I was intrigued.  It was a board game in which you laid down tiles, creating a different board in each play, collected various items to solve a cure (or be cursed), and either solve the curse or kill the remaining players.  The game was actually quite fun and it was very educational to see the process that went into creating a homemade board game that you hope to one day publish.  The couple who made the game were very nice and we all had a nice time playing the game.

After playing other games with groups my friends finally arrived and following that evening's raffle, we sat down to play Last Night on Earth.  As newbies to the game we brought a "Players Wanted" flag with us to see if anyone wanted to join us as we played as either zombies or humans on the last night on earth.  Since we had not played the game we decided to play with the beginners rules to get the basics of the game.  Lucky for us one of the Geekway volunteers, Tim, joined us and was able to run the game with the advance rules.  The game was loads of fun and felt like a B movie.

The rest of the weekend was filled with similar experiences.  It struck me at one point in the convention that I had not seen one person look or sound upset.  In gaming at home and with friends (or especially with my 5-year old son) I am used to someone being upset at losing or when someone plays a card or takes an action that adversely affects another player.  The magic of this gaming convention was that we were all amongst friends, we were all playing games, and we were all having fun.  Add to the fact that Miniature Market gave away free gifts for attending, had games on sale 4 for $20, and allowed Geekway attendees to shop directly from their warehouse, we were in board gaming heaven.  Geekway featured card games, dexterity games, kids games, strategy games, card games, dice games, role playing games, and more.

After spending over 24 hours over a three day period playing board games I can only look back and smile and rank the top 5 games I played over the weekend. 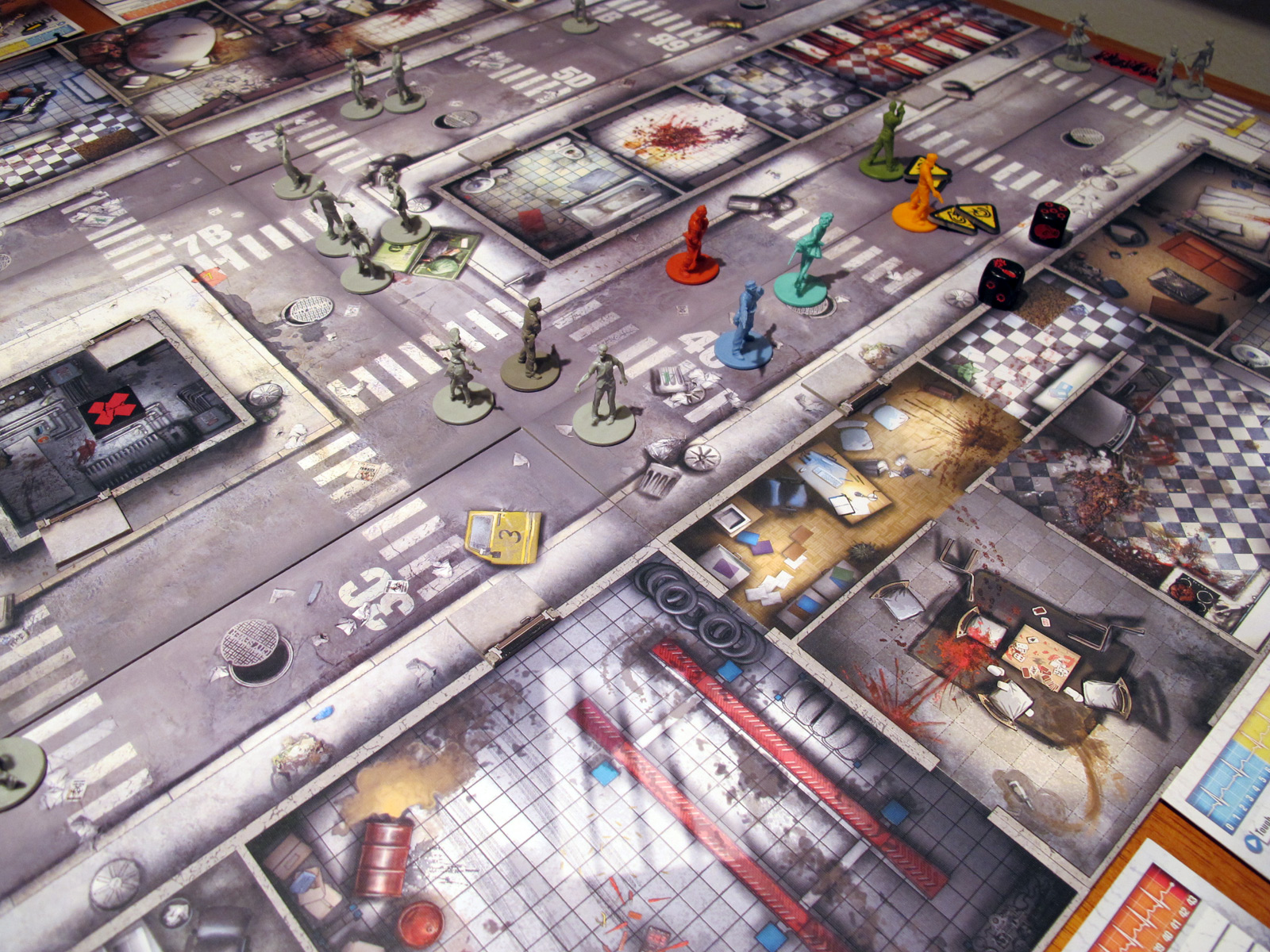 1. Zombicide - We were only able to play 2 games of Zombicide due to its popularity at the convention. Zombicide is a game in which you assume the role of a survivor attempting to survive the zombie apocalypse.  What I enjoy about Zombicide is how the game increases its intensity as the game progresses.   As soon as one player in your group levels up, each zombie spawn is more terrifying, and each objective harder to obtain.  We were unsuccessful in our Zombicide attempt, but had an absolute blast attempting it.

2. Flash Point - As someone with a very competitive wife, I am always on the lookout for cooperative games.  Flash Point is a cooperative game in which you assume the role of a fire fighter attempting to keep a fire at bay and rescue survivors.  The fire can get out of hand quick so it is imperative that you work well with your team in order to be successful.  Tim once again joined us for this game and I am happy to report that we were able to save all seven victims before the structure collapsed.


3. Space Alert - In what was the most unique game I played over the weekend, Space Alert is a real-time, cooperative game in which you assume the role of a crewman of a spaceship stranded in an asteroid field.  As a team you work together through a series of rounds as dictated by a CD that takes you through a 10 minute senario.  During these frantic 10 minutes, the players all play their actions face down and communicate to one another what steps they are taking.  Whether you are giggling the mouse to keep the computer from falling asleep to firing lasers at a target you hope is in range, you won't know if you were successful until you resolve everything upon completion of the CD.   Despite not quite saving our spaceship, this was an intriguing game that I hope to pick up soon.

4. Formula D - With time to kill prior to the Saturday night raffle I was allowed to make our game selection.  Despite being a proud owner of the game, I encouraged my friends to join me for a round of Formula D and we were all quite pleased.  Formula D is a car racing game in which you attempt to navigate a course and take the checkered flag.  With each gear you shift you role a different die, you are required to slow down and make numerous stops in turns, and each character has a unique ability that will hopefully allow you to win.  Despite overshooting some turns and taking damage to my tires, I was able to secure the checkered flag and take home victory!

5. Castle Panic - My final choice for top games of the weekend is a castle defense, cooperative game that leaves you and your group trying to defend your towers from an oncoming attack of goblins, orcs and more!  Utilizing cards and the luck of the die, each player attempts to slow the various minions that seek to destroy all six of your castle towers.  Unsuccessful in our first attempt, our second attempt was barely successful.  What I loved about Castle Panic is that it is a game I can imagine playing with either my son or my friends who are serious gamers.  It was fun, quick, and easy to play.
Posted by Mikey N at 12:00:00 PM