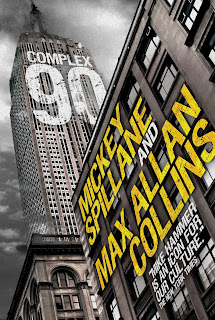 Like any American—or rather any literate American—I like the idea of free books. That’s pretty much why I contribute to this site, that and “helping a buddy out.” But, getting free books means having to read the free books.

Before we get to the review, I should confess that I have never liked Mickey Spillane and I have always hated Mike Hammer. When I was 19, my junior college history professor gave me a copy of I, The Jury. He was in the process of becoming a conservative—a process he later explained was a direct consequence of working in such an intensely liberal environment. He knew that I was a fan of crime fiction—mainly Hammett, Chandler, and whatever Jim Marr’s Murder Can Be Fun told me to read. Perhaps he thought that through Spillane he could save me from liberalism, especially if I chose to pursue an academic career.

A few years later, I read a couple more Spillane novels. But by this time, it was the Bush Era. My political views—always left, thanks to my socialist father—had become rigid and like any young idealist I was humorless, unforgiving, and fond of politicizing everything, especially crime fiction and film. Hammer’s hypernationalism, his casual chauvinism and misogyny turned me off. Very off.

I am now older, maybe even wiser. And I have experienced firsthand and found repulsive the left-liberal groupthink that is academe. I was ready for Complex 90.

This is a Cold War novel, peopled by KGB agents, intellectual turncoats, and spineless politicians. The book begins with Hammer having escaped from a Soviet jail, dropping 45 reds on his two-month journey out from behind the Iron Curtain. The P.I. is brought to the Pentagon for debriefing. At this point, still being an unconvinced reader, I expected the rest of the novel to be a recounting of Hammer’s Soviet vacation, 220 pages of with Hammer dispassionately killing commies and bedding their ladies as he fights his wake to Turkey, being a general asshole all the while.

Spillane’s a better storyteller than that. Hammer’s carnage abroad is a mere set-up for a far more interesting and intricate story. Granted, Mike Hammer does what he does best, dispatching goons, bedding women, and telling bureaucrats where they can shove it. But these tough guy antics serve the plot, which is compelling and fairly complicated. The book is driven subtle twists and turns as Hammer seeks to unravel why he ended up in Moscow escorting a conservative Senator on a fact-finding mission—and who he has to kill next. I won’t give away much more than that and spoil you fun, of which there is a lot.

I am not at all sure which part of the book are Mickey Spillane’s and which parts Max Allan Collins is responsible for—an indication of Collins’ mastery. Though I haven’t read much Spillane, I know it, his hardboiled style long an American institution, the tough guy counterpart to Chandler’s similarly institutionalized P.I. cool. After seeing countless imitations and impersonations, most of us “know” Spillane’s style, or at least when someone is aping it. But Complex 90 feels authentic, as if Collins purposely turned down this imaginary Spillane. It’s more likely that Collins has studied Spillane’s style as a result of their friendship and collaborations. In less capable hands, Complex 90 could have come off as another unnecessary attempt at being hardboiled. But Complex 90’s text is subtle, Hammer’s attitude never being mere exhibition.

Well played, sirs. Well played. I am looking forward to read more of Spillane’s work now. I’m confident in my leftism these days, so kill as many commies as you like.

Bonus: +1 for the NASA bit towards the end; +1 for the following lines: “As a prisoner of war, he expected ethical and humane treatment. But this was a cold war and my response would be in kind.” (Politically distasteful, but contextually fitting vis-à-vis the dude who was about to get his.)