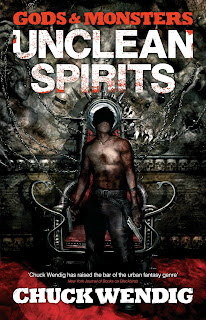 Is there a God? Or perhaps there are many? Is death The End? If, on the other hand, a Supreme Being(s) exists, what implications does that have for our human existence? We've all wondered about it. Is there an arbiter of my earthly conduct, who, like Anubis, will weigh my soul and determine if I am feather-light and bound for the celestial realms or heavy with transgression and in for some good old fashioned torment? How would our behavior change (if at all!) if we could know, beyond the shadow of a doubt, that such a being is up there somewhere—and is watching? Well, Chuck Wendig has an answer, albeit a playful but gritty urban fantastical one: kill as many of those supernatural scumbags as possible!

Almost from page one, we can sense that there's something unusual about the world Wendig presents, and very quickly, we figure out just what that nagging something is: in this (dystopian!) universe, the gods and monsters are all too real, and all too horrible. In fact, the line between god and monster ends up being pretty thin/bordering on nonexistent, and everywhere the capriciousness of the gods as described, say, in Ovid's Metamorphosis, each with his (or, significantly, her) all too human failings like jealousy, petty rivalries, and totally gratuitous cruelty, is on display. Easy enough, then, to get behind the little vendetta Cason Cole (who is about as estranged from his wife and kid as it is possible to be, really) and his mysterious ally Frank (who has more scar tissue than face) launch against these supernatural jerks, because after all, students of Greek mytho-history, for example, universally long to administer a flying elbow on someone like Aphrodite for instigating the Trojan War. No trouble at all to get into the mindset that giving gods a thorough beat-down is probably a good idea.

But gods must be incredibly tough to kill, right? Well...apparently not, since each has a fatal weakness to a specific substance which human mythology, rather handily, has recorded in some way, shape or form. Plus it's suggested that strong gods can apparently smite wimpy gods without much effort, and refrain from doing so solely out of class solidarity. It's all a little pat, but I'm prepared to forgive Wendig this Superman-esque Kryptonite copout.

Any of this sounding familiar? A story about a tough as nails man with some grade-A family problems who encounters gods and whatnot and soon realizes he can a) hold his own against them, and even better b) play them off against each other, but c) might himself not be quite as ordinary as he seems? Yeah, that's ringing an American Gods-shaped bell loud and clear, and unfortunately Wendig hasn't really moved out of Neil Gaiman's giant shadow here. 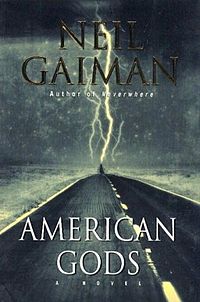 American Gods and Monsters, by Nuck Wendigan--no, wait a minute...

On the other hand, there are far worse places to be, stylistically and even creatively speaking, than in the shadow of Gaiman's greatness, so while he loses points for reproducing a story similar enough to that of American Gods that the P-word popped into my head, Wendig has produced quite an entertaining novel here. It may lack Gaiman's effortless pithiness and thought-provoking philosophical overtones, perhaps (Gaiman is British, after all, and everyone knows those guys have the Midas touch when writing), but it's still a page-turner that grabs you at the beginning and keeps a vice-like grip on your attention till the end (even though by the end, the similarities between Shadow, from American Gods, and Wendig's protagonist Cason are getting pretty extreme).

Wendig—rather boldly, I would say—also indirectly includes the Christian God and angels (including the fallen ones) in his story, suggesting they're simply part of the vast pantheon of human belief, though there's no fistfight between Cason and God, sad to say. Unlike Gaiman, Wendig never comes right out and explains the mechanism, as it were, behind the gods' existence—whether they exist and draw power solely from human faith, or if their existence is independent of human action—which is kind of a problem, since the world he's created consequently lacks the clarity of Gaiman's vision, in which gods' power and very existence are dependent on human worship and belief. In Wendig's view, why are some gods stronger than others? This is one mystery that is never explained.

Regardless, if the standard of a novel's success is how entertained the reader feels while reading and what kind of mental aftertaste the story leaves, Wendig has done his job well indeed!

Bonuses: +1 for the awesome line "the ants weigh more than the elephants", + 1 for creating a vivid, gritty world where a tough guy battles it out with the gods

Penalties: -2 for coming perilously close to copying American Gods in the process, and -1 for not being as good as said masterwork (which you should read!)

[This is quite a high score by our rigorous standards!]
Posted by Zhaoyun at 12:01:00 AM