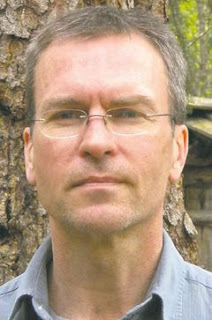 Today we welcome Ian C. Esslemont to Nerds of a Feather. We are the latest stop on Ian's blog tour to promote his recent book Blood and Bone (which we reviewed here). Today, Jemmy and The G were lucky enough to "sit down" with Ian to discuss Blood and Bone, the Malaz world and his overall process of collaborating with Steven Erikson. We particularly appreciate his musings on the use of violence in fantasy. Read on, and enjoy!

NoaF: Your biography mentions that you studied archaeology. In what ways have your studies of archaeology impacted your novels and world building?

ICE: As Steve and I have talked about before, we hope that our background and training in archaeology and anthropology has ‘impacted’ our work significantly (by the way, I hate that word). Anyway, while we may have taken various liberties, for the most part, our thematic concerns in the World of Malaz are very much driven by issues out of anthropology, such as culture contact and its consequences, colonialism, the nature of religion, the shift from chithonic ‘paganism’ to other religious regimes, cultural and ethnic pogroms, loss of histories, etc.

NoaF: Malazan fans will love your depictions of Jacuruku--especially Himatan, the jungle guarded by Ardata. In fact, the natural environment (which often brings to mind Joseph Conrad’s Heart of Darkness) plays a bigger and more direct role in Blood and Bone than in any other Malazan novel we have read. What inspired you to center the novel in a deep and dark jungle?

ICE: I hope that the readers do enjoy it. I can’t recall what suggested introducing a jungle. I just always saw Jacuruku that way. When I showed Steve chapter 1, he was surprised, but pleased. ‘Hey, a jungle,’ he said. ‘No one does jungles in fantasy.’ Of course there are pieces set in tropical environments, but what Steve was getting at was the tired cliché of fantasy novels /series being nothing more than iterations on northern European peoples, climes and environs. Or Mongolian steppes, or such. I can’t think of one sword and sorcery series, or epic fantasy series, that goes deep into the jungle. Though, Conan does tramp through a few. And I believe She is set too far north in Africa to occupy a tropical jungle. Thinking about it, I suppose it would have to be a combination of one of my favourite authors, Conrad, together with having lived for three years in Thailand. My wife and I did a lot of jungle trekking there, and in neighboring Cambodia, and Laos.

NoaF: One of the most powerful themes running through Blood and Bone is man’s desire to control nature, to make it “productive” and warp it to his own ends. Could you speak to how such broader questions informed your work?

ICE: This theme runs all through the Malaz novels. Each species, or culture attempts to put its own ‘face’ on its surroundings and we see this played out everywhere in Malaz. The struggles between the species or cultures is a struggle to control this broader narrative of existence. The struggle plays out over the entire rather extended history of that world. As it has over our own. While we, the beneficiaries and descendants of this ancient struggle, are – to our discredit – still unable to let it go.

NoaF: Those of us who have read a number of other Malazan books are already familiar with Warrens and Elder Holds. The Thaumaturg mages and Shaduwam, though, seem to practice a different type of magic. Could you elaborate on this type of magic for our readers?

ICE: The magic of the Thaumaturgs and Shaduwams are rooted in existing systems (or so I hope). I saw the Thaumaturgs as practicing a sort of warped Denul (the magics of healing – medicine, if you will). They have stretched and twisted it into a monstrous mirror-image of itself. A magic of bodily torture and deformation (where plastic surgery is going, I’d say). As for the Shaduwam, I gave them the traditional elder shamanistic practices of animism, meditation, philosophy and spiritualism. I don’t believe we see anything from them that can’t be attributed to such, or so I hope.

NoaF: In some ways, the Thaumaturg magus-leadership is as coldly cruel as the Pannion Domin (and the cruelest of regimes in the Malazan world). What inspired your vision of the Thaumaturgs? Is it based off any historical precedent, or is it the product of your imagination?

NoaF: You and Steven Erikson co-created the Malazan world. Could you walk us through the creative process of collaboration? Were there unique advantages and/or challenges to this approach?

ICE: It was chance, really. We met on an archaeology dig; we found that we both wanted to write; we found that we worked well together gaming; and we didn’t annoy the hell out of each other. It was a creative friendship that brought energy and laughter to our shared material. And it’s that enjoyment that really drives creative work, I think. You have to love what you’re doing, and we both love makin’ this stuff up. All the above are the advantages. The main challenge, I guess, would be trust; trust that the other person won’t mess things up; trust that the shared vision is in fact shared – and thus there won’t be any of that messing up. And, so far, there hasn’t been any of that from either of us.

NoaF: To what degree do you coordinate stories? Do you establish a continuum prior to writing or do each of you just riff off what the other guy does in his last book?

ICE: The stories were, for the most part, all coordinated in the main arc of his ten and my five or six. These were set out long ago in their essentials. However, since then, each has also been a sort of riff on what the other guy did last.

NoaF: The Malazan books are pretty dark and violent, and as I’m sure you’re aware, darkness and violence in fantasy has been the subject of some debate lately. We weighed in on this topic a few months ago with what was basically a middle position: all of the fantasy reviewers at this site like a lot of what could be considered dark or gritty fantasy, but get frustrated when it’s just dark for darkness’ sake. We want violence, when it’s presented, to tell us something that couldn’t be told another way, and I think the Malazan books are notable for not just presenting violence, but exploring the consequences and implications of that violence in meaningful ways. Could you speak a little to your approach to these topics?

ICE: That is reassuring to hear. Steve and I believe firmly that any violence must be accompanied by its consequences, the way effect follows cause. Darkness and violence for its own sake is shallow and immature. I hope that if the Malazan world conveys anything, it is that a violent world is a scary place, and not to be desired. If there is violence, then it is the violence of the Eddas, or the Elizabethan stage, with all its stabbings, beheadings, battles, duels, poisonings, regicide and fratricide. As well as all its exploration of justice, morality, and the depths of the human soul.

NoaF: The Malazan books are known for their diverse world building, rich cultures, myriad magic systems, and the ascendants (strange and powerful individuals who have transcended death and have reached near-godlike status, for series newbies). What races/cultures and character types in particular have you enjoyed writing about, and why? Are there any that you find particularly difficult to write?

ICE: I suppose I enjoy writing about the oddities the most. The one of a kind survivals or recluses. They are … unusual, odd characters. I find normalcy hard to write. One of the groups I most enjoy writing are the T’lan Imass. To me they are fantastic in every way. Tragic, but fantastic. I find the Jaghut difficult to write as I suspect I don’t quite have the grasp on them that Steve has. I also very much enjoy writing scenes with Malazan soldiery. I find that I allow myself permission to do all sorts of things with them that I wouldn’t dare in other scenes, or with other characters.

NoaF: One of the other things the Malazan books do really well is that they pose thought-provoking questions, and only answer some of them. Often times the reader is left in the dark. How do you strike a balance between too much and too little information? How do you know when enough is enough? And do you ever second guess yourself?

ICE: I hope that so far I, and we, have struck this balance. I suppose it’s up to each reader; some have a higher tolerance for mystery and for actively digging things up, others less. So far, my instinct has been to hand the reader very little. Readers, I think, would agree, that they have to work harder to get into our series than they have to elsewhere. This isn’t just denying rewards, or withholding facts. Rather, we hope that when the reader has figured something out, or discovered something, they’ll feel that they’ve earned it.

NoaF: Now that Blood and Bone is out, we are already looking forward to your next book, Assail. When can we expect it to come out? Are there any other projects you’d like our readers to know about

ICE: Well, I’m not certain when Assail will come out; that’s not up to me. Late this year, early next, I’d imagine. Once I hand it over, I’ll be free of the main arc Steve and I hammered out long ago. From there, I suppose I’d like to take a hand to some non-Malaz material. But I’m also not ruling out returning to the world to periods and regions as yet unexplored.

NoaF: Thank you so much for taking the time to talk with us!

ICE: Thank you for the opportunity to talk about all things Malaz, and thanks to the readers and fans.
Posted by Jemmy at 12:00:00 AM