We are excited to present a fantastic guest microreview by SF/F aficionado Zhaoyun. Today he reviews Justin Cronin's apocalyptic and post-apocalyptic novel, The Passage. 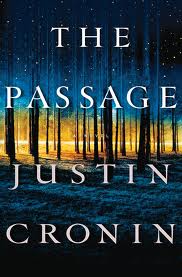 
First things first—if the word 'vampire' makes you swoon in teenage love angst, then you might want to skip this genre-shaker. But for those tired of the recent Edward/Stefan, love-will-overcome dynamic in depictions of the supernatural, find yourself a copy of The Passage and watch helplessly as it sucks you in, leaving you drained and feverish for more. Despite being almost 900 pages long, it's truly a page-turner, and summoning the mental effort required to put it down before one is finished is surprisingly difficult.

There is a romance of sorts, but no absurd vampire-human liaisons; instead, The Passage is science fiction at its most intriguing, an exploration of what might happen to human civilization if the thymus gland, which atrophies in adults, were re-activated via a weird virus taken from a certain flying mammal in South America (spoiler alert: things don't end well). With many post-apocalyptic stories, for example The Walking Dead, it's hard to imagine such listless, easily dispatched foes really overrunning the world; fortunately, The Passage doesn't have that problem. The creatures of The Passage are truly terrifying, with only two real weaknesses, and don't make nice with the enticing blood bags they see all around them. That whole Babcock thing, in particular, chills the blood.

In a rarity for a book on vampires, it's exceptionally well-written, combining moments of almost lyrical beauty in its descriptions with an appealing, Hemingway-esque minimalism in the dialogue, which saves it from descending into melodrama. The first part of the book, in which the human world is a frog sitting placidly in a pot just seconds from full boil, is the best—indeed, it's one of the most compelling descriptions of the beginning of the end in any apocalyptic fiction I've read.

Yes, Cronin begins The Passage in spectacular fashion, succeeding in drawing the reader all the way in to this doomed world, and making us feel powerfully connected to the characters he has described so well...and then he pulls a Battlestar Galactica. Just as we are fully engaged with this world he's created, he decides to skip ahead, to a very different situation in space, time and vibe, with largely new characters and new challenges. Cronin's decision to skip ahead will probably be just as controversial as BG's 'let's skip ahead a year and let Lee Adama get married and fat (not necessarily in that order) and slap a mustache on Olmos' dice-roll.

As a consequence of said time-leap, for hundreds of pages after the end of part one I kept reading mostly out of almost clinical curiosity over how Cronin was going to suture these two very different stories together. Yet along the way, I found myself becoming immersed in Cronin's second "world" just as I had with the first, pre-apocalypse human world. Gradually I began to realize that the only way to manage such a splice was—you guessed it—to pull much the same trick again, and drag the reader kicking and screaming out of that second world, a fascinating post-apocalypse setting, and into a third world—basically consisting of everywhere not in the second setting. It was this third environment that proved a bit disappointing, reminding me of J.K. Rowling's ill-advised venture away from her winning Hogwarts formula in HP and the Deathly Hallows (there's even camping in the woods).

Some might be put off a bit by a certain key female character (you'll see who and what I mean when you read it), as though the only way girls can be cool is via uber-empathy a la the lame "Heart" power from the ancient American animated series Captain Planet. This is a book Cronin has said was inspired by his daughter's request for a book where a girl saves the world, and although said girl certainly has an interesting role to play, she's no Sarah Connor.

Nonetheless, Cronin brings it all together in quite a satisfactory way, and any who continue reading past the book's stellar first section will ultimately find their faith rewarded. In short, I laughed, I cried—it was way better than Cats and also better than the vast majority of either vampire or post-apocalyptic fiction.

Bonuses: +1 for excellent character development, +1 for its intricate construction of not one but two fully realized settings, +1 for Babcock

Final Verdict: 9/10 "Standout in its category"


[Think our scores are too low? Read about our scoring process here, and learn why we say "no" to grade inflation.]