Another week of comics and another week of all really good titles. It was a struggle to select one title as pick of the week when all of them were so good. The intrigue from Sex #1 leaves me wanting more (easy there tiger), Snapshot continued the fast pace of the first issue, and Age of Ultron was simply great. In the end only one title can garner top honors and that goes to the one with vikings. 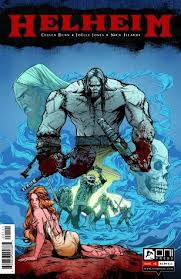 Pick of the Week: Helheim #1 - The creative team of Cullen Bunn, Joelle Jones, and Nick Filardi sure manage to cram in quite a bit into one issue. The pace is frantic, the action is fierce, and the art from Jones captures the fear and intensity that these vikings possess. I challenge you to read through this issue and not be clamoring for the second one. It hooks you early and delivers an ending that will bring you back.

In the story we learn that Rikard and his fellow Vikings have a common foe in the witch Groa. They are returning from an unsuccessful attempt to kill her in which many vikings were lost. It seems that the witch is interested in Bera, Rikard's special lady friend, who Rikard's father isn't afraid to sell out. In this debut issue we see prophetic visions, humans rising from the grave, magic, and a hero that appears invincible while his enemies are still alive. Who doesn't love a good nordic tale involving witches and magic penned by a mind the likes of Bunn. It looks like the Oni Press has another hit on its hand courtesy of Bunn and his crew.

Sex #1 - Simon Cooke seems to be a Bruce Wayne with more flaws as he returns home to Saturn to take over the family company and remain retired from his role as the armored saint in this new Image title with great potential and interesting characters established in one issue.

Snapshot #2 - The pace of this comic does not slow down in issue #2 as Jake escapes and finds an ally in Callie, the daughter of the man who was supposedly dead in the photos, and tries to uncover more information in this web of deceit he is now knee deep in.

Age of Ultron #1 - Stunning first issue that just barely missed pick of the week honors from Brian Michael Bendis as the Avengers seek to merely survive in a post apocalyptic New York controlled by Ultrons.