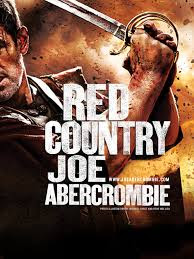 With his First Law trilogy and Best Served Cold, Joe Abercrombie turned inside out my expectations for character development in novels. Instead of character development, one witnesses character regression. People are downright bad. Vile. But upward gazing... until they give up and become morally decrepit once more. In each of his stories, the main characters try to become better people. And just as the reader becomes convinced that the protagonists might actually redeem themselves, BAM!, they recognize the futility in doing so and return to their previous lives as pond scum. People cannot escape their true selves, their dirty and sludge-filled nature, no matter how much they try. Needless to say, this particular formula, with all its grit and blood, made me an instant fan.

With Red Country, his sixth novel (and the fifth that I have read), Abercrombie offers a particularly skillful iteration of this formula, bringing back characters we know and love alongside fun and new protagonists. In fact, he even lays out this formula early in the book, in a conversation between Temple and our old friend, the Northman Caul Shivers:

"More so with," muttered Temple, looking into the fire. "He never cared much, but he used to care a little. He's got worse."

"Ah." Shivers showed his teeth. "You're one of them optimists I've heard about."

"Very wise. I find hoping for a thing tends to bring the opposite." The Northman slowly turned the ring on his little finger round and around, the stone glittering the colour of blood. "I had my dreams of being a better man, once upon a time."

Shivers stretched out beside the fire, boots up on his saddle, and started to shake a blanket over himself. "I woke up."

But after setting up these rules, Abercrombie hints that he may be ready to break them. Can people change after all? Or are we all stuck in the mud, merely contenting ourselves to gaze up at the sky?

Red Country is a dark fantasy novel with a pinch of the old American West. It follows the story of Shy South, a woman with a bloody past. When her younger brother and sister (Pit and Ro) are stolen by a band of thieves, Shy sets off on an adventure to retrieve them with her old stepfather, Lamb. Although she lets Lamb accompany her, Shy suspects that this scarred old Northman is nothing but a career coward. Little does Shy know that he too has a bloody past, a past from which he has a hard time escaping. The journey to save their family takes these two unlikely heroes from a small holding outside Squaredeal to the gold rush town of Crease, nestled deep in the Far Country. They find themselves confronted with fierce Ghosts, involved in bloody politics, and forging an alliance with the infamous mercenary leader, Nicomo Cosca, and his ne'er-do-well lawyer, Temple. In the process, a river of blood is spilt throughout the Far Country.

In many ways, Abercrombie has really come into his own with this book. He has crafted a fantastic character-driven fantasy that engages the reader on multiple levels. The story is engaging and the prose crisp, infectious, and, at times, powerful. The battles are vivid and intense. Abercrombie is careful to balance willful and strong characters with their feckless and weak (but no less compelling) counterparts. I found myself deeply caring about what happened to the most despicable people, and laughing at the delicate absurdity of it all. That is, when I wasn't laughing out loud at the wonderful black humor peppered throughout this black tale.

Abercrombie is at his best in creating wonderfully complex antagonists. Take, for instance, Nicomo Cosca. Not only is Cosca a fantastic character, one who moves from thoughtless and hilarious to pensive and poignant. Abercrombie also uses him as a lens through which he explores evil and all its depravity in his world of bad. Cosca's own biographer, Sworbreck, comes to look at him as the face of evil.


Sworbreck had come to see the face of heroism and instead he had seen evil. Seen it, spoken with it, been pressed up against it. Evil turned out not to be a grand thing. Not sneering Emperors with world-conquering designs. Not cackling demons plotting in the darkness beyond the world. It was small men with their small acts and their small reasons. It was selfishness and carelessness and waste. It was bad luck, incompetence and stupidity. It was violence divorced from conscience or consequence. It was high ideals, even, and low methods.

But at least Cosca remained aware of his own depravity. And this self-awareness is his saving grace. True evil, as Abercrombie tells it, is dark actions in the service of higher ideals. Fanatical utopians, those willing to sacrifice many in the service of good, are far worse than those morally corrupt who will do anything in the service of self-interest. Morality, Cosca notes to his Inquisitor boss, is the lie people tell themselves while perpetrating unspeakable acts.


The Inquisitor waited for silence. "Do you believe in anything?"

"Not if I can help it. Belief alone is nothing to be proud of, Inquisitor. Belief without evidence is the very hallmark of the savage."

Lorsen shook his head in amazement. "You are truly disgusting."

"I would be the last to disagree, but you fail to see that you are worse. No man [is] capable of greater evil than the one who thinks himself in the right. No purpose more evil than higher purpose. I freely admit that I am a villain. That's why you hired me. But I am no hypocrite... I have mouths to feed. You could just go home. If you are set on doing good, make something to be proud of. Open a bakery. Fresh bread every morning, there's a noble cause!"

Red Country also features equally complex protagonists. Lamb and Temple, for instance, are no less dark and broken than any other character in the book. But they are also mirror reflections of each other. Both are driven by an underlying cowardice, but for very different reasons. Lamb uses his cowardice to mask his inner villain (or to shackle him in the dark recesses of his mind); through cowardice, Lamb attempts to become a better man. Temple's cowardice, on the other hand, consistently prevents him from becoming a better man. Despite being driven by the same underlying cowardice, when the proverbial excrement hits the proverbial fan, both characters thus react in very different ways. The reader finds himself/herself cheering for them nonetheless, no matter how bad they become. Both are  only human, after all.

The only issue I had with Red Country was its formulaic sense of character development and character regression, something that Abercrombie has hashed out time and time again. At times, I found myself wishing that Abercrombie would step out of his comfort zone and try something new. He certainly has the talent to do so. Abercrombie, after all, is one of the shining stars of the dark turn in fantasy. Of course, one could interpret Red Country as Abercrombie's first attempt as breaking his own rules (albeit in a very ambiguous way). Do his characters in fact become better people? Or, upon deeper reflection, are they not simply teetering upon a giant precipice, waiting for a gentle push to fall back into the morass of lies, cowardice, brutality, and depravity? Read Red Country to find out. You won't be disappointed.

Penalties: -1 for feeling like I have read the same (granted, very engaging) Abercrombie story over and over again.

Final Verdict: 8/10 "Well worth your time and attention"

[Think our scores are too low? Read about our scoring process here, and learn why we say "no" to grade inflation.]
Posted by Jemmy at 12:00:00 AM