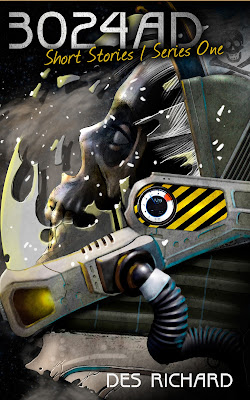 Hey all, Dean here- I've been writing the Adventures in Indie Publishing column these last few months. As you may (or may not) be aware, I have a book of my own coming out- A collection of short stories set in a universe called 3024AD (I'll let you guess what the time frame is there).

It will be out on all major e-retailers on April 23rd. Here is an excerpt from it; the flash piece "The Voice":

The Voice echoed throughout the hull of the colony ship Jade. It comforted Wayne McFadden as he went about his duties. He had a nagging feeling that there was something else he was supposed to remember, but never forgot his duties.

He caught a glimpse of himself as he washed one of the portholes, but his eyes did not comprehend. He had been good-looking, once. His once-bright eyes were now dull and sunken, and his thick beard and long hair hung in a scraggly heap. He ignored the reflection and continued with his duties.

The Voice was there for him; a soft and soothing female voice. Sometimes he became angry at it, at night, when she wouldn’t leave him alone. His nerves were raw enough from his duties; he didn’t need her to keep him up as well. But then, she was always there for him in the morning, warm and welcoming, and he always forgave her.

He smiled as she spoke again while he moved to the lower decks. He passed into the engine room, the fuel conduits did not give off their ordinary green glow, but he didn't notice. He whistled to himself, content to make sure all was clean. Those were his duties, and he never forgot his duties.

Days passed, but McFadden didn't notice. The Voice greeted him every morning and he went to his obligations. He wished the rest of the crew would do the same, but he never criticized. The captain would see to that, except he seemed derelict in his duties of late. But McFadden never complained.
** *
Michael Lawler, clad in space suit and maneuvering unit, approached the hatch of the Jade as she drifted slowly in space. As he coupled himself to the derelict ship, the recovery ship hailed him.
"Mike, it looks like someone is in there." He turned around to look at the clunky ship that would tow the Jade back, shooting a quizzical look towards the operator’s canopy. "I thought all survivors were accounted for."

"Looks like we thought wrong. I'm sending Glass over." Another scrapper soon appeared from the belly of the ship, following Lawler's tether over. He handed the other man a pistol. "Just in case." Mike laughed. Glass was the 'just in case', a hulk of a man who had never been bested in any fight he had been in. Mike took the gun and turned his attention back to the hatch. It swung open and then floated into the airlock.

"Wonder where the bugger is at," Mike asked as the airlock pressurized. They exited, but did not take the suits off. They made their way to the bridge, a simple two-seated affair. "Has that been on the whole time?" Mike tilted his head to listen.

"Can you turn that off?" He said to Glass. Glass moved over to the comm station, and smashed it with a gauntleted fist. The voice stopped, and Mike went about to prepare the Jade for docking.  Suddenly, a man appeared behind them. Wild eyed, his long beard and hair spoke to the amount of time he had been alone on the ship.

"What did you do to her?" He shouted, voice hoarse and unaccustomed to speech, and launched himself at the two scrappers.

Mike fumbled with the pistol, but managed to lift it as the castaway reached him. He pulled the trigger at point-blank range; the laser charge burned a hole in the man’s chest. He went limp and his body hung in space like a marionette without a puppeteer.