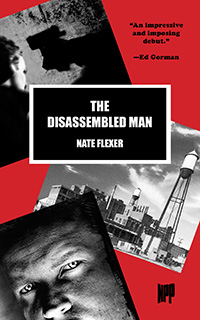 I have not been looking forward to writing this review. I wanted to like The Disassembled Man, I really did.  But I did not. This does mean that I hated it -- I didn't. This does not mean I had a hard time reading it -- it only took me a few sessions over a weekend. And I wanted to like it because it's the debut novel from Nate Flexer. Who's this guy? He's a working man, a high school teacher. A bona fide productive member of society, unlike your average novelist. (Or academic.)

The Disassembled Man is unfortunately a fairly standard Jim Thompson homage. And herein lies the problem. Thompson is the king of the crime novel, IMHO. But Thompson -- like any good crime writer, royal or common -- hit upon a formula and stuck with it. (With the exception of The Grifters, no one reads his non-formulaic work.) A good formula, perhaps ironically, is hard to replicate. No one really tries to sound like The Ramones. And writers should probably avoid the Thompson model. They don't, but I mostly manage to avoid these novels. Mostly.

The plot of The Disassembled Man is pretty straightforward Thompson. The book's hero, Frankie Avicious, is a psychopath who decides to get rich by killing someone, which then requires that he kill someone else, and so -- because innocents abound in these worlds -- until Avicious gets his due. (That's not the spoiler.) There's the Southwestern Gothic setting -- Arizona. There's the industry setting, a slaughterhouse in this case. There are women with various immoral dispositions.

Flexer tries perhaps to compensate for his adherence to Thompson's formula with witty dialogue. Metaphors, analogies, and similes abound. A lot of this is like a lot of that. Flexer's intention is clearly to create a sophomoric version of P.I. monologues -- Philip Marlowe meets Always Sunny. He succeeded in eliciting a smirk or two, but overall the constant attempt at wit became tiring, the incessant description and commentary of the protagonist slowing down the reading of the novel. I often wished Flexer would relax a bit and let the plot develop more organically.

OK, now for the SPOILER:

The last third of the novel begins with a twist. I will not go into great detail, but there's incest. I am not a fan of the use of this taboo. Rarely is it managed well, not since Arrested Development at least. It has also been a bit overused over the last decade or so. Flexer's approach to the subject, to his credit, was in keeping with novel's ethos and fits the plot relatively well. But it's still incest, so it's too intentionally shocking.

Maybe there's an audience for The Disassembled Man. I don't know how to end this post.