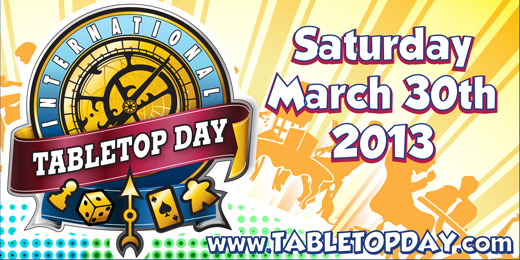 Time to check your calendars nerds, because in t-minus 10 days International TableTop day will be upon us!  International TableTop Day is a holiday to celebrate everything that involves gaming.  Announced on February 27 by Geek and Sundry, Felicia Day's hit YouTube channel, International Table Top day has gathered momentum and new events are popping up daily on their map.  In fact, new events have been showing up so fast that the map went down shortly after the announcement.  No event near you?  Then create one!

The gaming community is already on board with Asmodee Editions, Steve Jackson Games, Days of Wonder, and many other publishers are providing promotional items to support local events.  It is a great excuse to break out some old and new games and socialize with fellow human beings.

As I mentioned, the Geek and Sundry show TableTop inspired International TableTop Day.  The show is hosted by the lovable Wil Wheaton and features a new game and different celebrity guests each episode.  The show has taken a toll on my wallet, as I have ordered many games seen on TableTop.

If you are like me and plan on hosting an event then you need some good games to entertain.  Here are five games you should consider as featured on TableTop.

For the nerds who like to screw over his or her friends:
Munchkin by Steve Jackson Games

For the cartography nerd:
Ticket to Ride by Days of Wonder

For the hypochondriac nerd:
Pandemic by Z-Man Games


For the resourceful nerd:
Settlers of Catan


For the nerd with a short attention span:
Zombie Dice