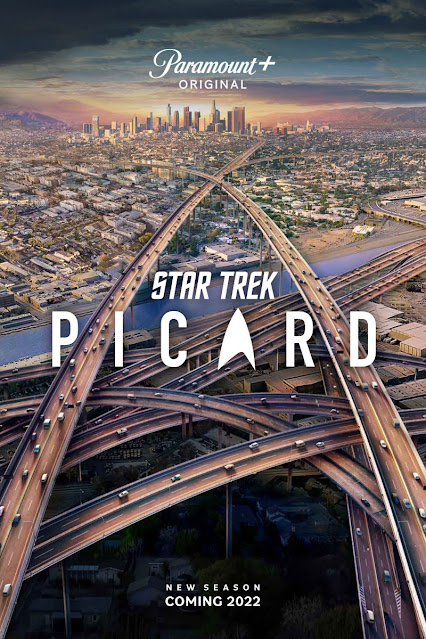 Season 2 of Star Trek: Picard bites more than it can chew. In the span of ten episodes, it tries to explore xenophobia, eugenicism, the weight of self-blame, repressed trauma, the tragedy of finitude, the tension between open and closed societies, the human yearning for intimate connection, the fear of loneliness, the responsibilities that come with parenthood, immigration policy, the purpose of life in old age, the narcissism inherent to the search for a legacy, authoritarianism, temporal paradoxes, suicide, and the uncertainty about the turbulent direction of humankind in the 2020s. Unfortunately, the show doesn't manage to say anything insightful about any one of its myriad themes.

The season begins by proposing a knock on the door: the Borg, old enemies of the United Federation of Planets, all of a sudden ask to join it. However, Admiral Jean-Luc Picard chooses to self-destruct his ship before allowing his old tormentors a foot in the door. This encounter sets up the argument between inclusion and exclusion that will continue in later episodes, and it gains heightened resonance by virtue of the characters who participate in it: captain Ríos, a Latino who gives commands in Spanish; Seven of Nine, an ex-Borg who was given a second chance at humanity; Elnor, a refugee from a destroyed world; Agnes and Raffi, chronic loners; and Jean-Luc himself, a techno-organic creature whose existence was illegal in the Federation just months before. This crew is composed of identities that, either in the real world or in the show's setting, have at some point been rejected, ignored, and excluded. And this is the crew that chooses to reject the Borg's open hand. This is the crew that consciously chooses death instead of risking further openness. So it's fitting that this is the moment when cosmic trickster Q steps in and shows Jean-Luc the flipside of that mindset.

Even before the revelations in the season finale, the thought of welcoming the Borg into the Federation shouldn't have been off the table. Star Trek has an established tradition of dissolving enmities: we've seen Earth gladly cease hostilities with the Klingons, the Xindi, the Andorians, the Romulans, the Orions. The Federation grows stronger each time it makes rivals into allies.

Q creates an alternate timeline where the fascist Confederation has a darker way of dissolving enmities: the eradication of every species that is not humankind. This world's version of Jean-Luc Picard is a mass murderer who serves supremacist ideals and gleefully performs televised executions. This reality is everything Star Trek has always warned against, which is why it's disappointing that we only spend one episode there.

To be fair, Star Trek had already shown us several examples of galactic history gone wrong in the Mirror Universe. But there was always the implied relief that those horrific events didn't happen to us, didn't affect our history. Our history was meant to be the peaceful Federation. The choice in this season of Picard to have the bad future happen in our universe makes the dystopia feel much more threatening. The cruelty and hopelessness of the Mirror Universe can no longer be relegated elsewhere. The potential for endless horror is right here.

Literally right here: one of the most compelling plotting choices of this season is to set the point of divergence in the real world's present. It's Earth in the 2020s where the future is decided. It's you and me watching Picard. It's up to us to decide whether our future will be an egalitarian utopia or a fascist nightmare. However, the show doesn't do anything interesting with that enormous idea. Captain Ríos suffers a random teleport mishap that conveniently puts him in the crosshairs of ICE, but his ordeal through arrest and imprisonment has a perfunctory air to it. The subplot where Ríos is in danger of disappearing forever in immigration jail has an obvious thematic link to the kind of future our heroes are trying to prevent, but the episode occurs in isolation from the rest of the story. The draconian proceedings of US immigration policy feel like they should, but really aren't, related to the flow of historical events at the center of the plot. By turning the capture and rescue of Ríos into a side quest completely untethered from the main mission, the show missed its best chance for relevant commentary.

There's nothing wrong per se in a story having a large number of themes. The problem with season 2 of Picard is that those themes have little to do with one another, and sometimes lead to contradictory messages. For example: when we learn that the crucial event that must be preserved in today's Earth in order to avoid the dystopian future is the participation of a certain ancestor of Jean-Luc's in a space mission (making this the millionth story to fall for the Great Man myth of history), we meet Tallinn, an alien secret spy tasked with protecting said ancestor until she flies to space. In the final episode, Jean-Luc tries to prevent Tallinn from sacrificing herself to complete her mission (in fulfillment of an Unnecessarily Cryptic Prophecy), and Tallinn protests that her life is hers to risk, and Jean-Luc has no right to interfere with her choices. However, interfering with someone's life and even guiding their choices to keep them from risk is exactly what Tallinn has been doing to Jean-Luc's ancestor for years. The point made in this discussion comes too close to mirroring the evil future's implied stance that some deaths are more acceptable than others. Moreover, the thematic thread about Jean-Luc's need to stop holding himself responsible for everyone else conflicts with the thematic thread about our historical responsibility to protect the future. These two messages didn't have to clash, but they have that result in this particular intersection of plots.

This incoherence reocurrs in regard to Jean-Luc's inner conflict. Q points out that his choice to leave his personal past intact and not prevent a chain of events that resulted in his mother's suicide shows growth on Jean-Luc's part. However, serenely accepting a painful reality is the opposite of what our team of heroes have been trying to accomplish the entire season. If it's a valid ethical choice to alter the past so that billions of people won't live in misery, why is it praiseworthy of Jean-Luc to not save his mother and himself? Tallinn asserts that we don't get to choose what losses we have to bear, which is an argument worth considering, but it comes off as a weak argument when presented in the same story where the main mission is to fix a cosmic loss. With these conflicting positions, the season comes off as uncertain of what it wants us to care about.

The key issue Q hoped his old frenemy would dare to face turns out to be family trauma, but there's no causal or even symbolic connection between Jean-Luc's mother and Jean-Luc's 21st-century ancestor. Q effectively assigned Jean-Luc one mission while intending him to complete another, and the narrative disjointedness feels too big at times, like two separate plots competing for centrality. The scenes we spend dealing with his difficult memories come at the expense of his time travel mission, not in the service of it.

This failure to achieve cohesion is especially regrettable when it comes to Jean-Luc's personal growth. The moment Q's actions affect is the self-destruction of Jean-Luc's ship (i.e., a suicide); the moment he expects Jean-Luc to not affect is his mother's release from confinement, which allowed her to hang herself. By helping Jean-Luc relinquish his guilt for his mother's suicide, Q means to prevent Jean-Luc's own suicide. And yet again, the method of execution has no relation to the ultimate goal. The switch to a dystopian timeline is something entirely apart from Jean-Luc's personal problems, and Jean-Luc's reward for fixing the galaxy is a trip back to his time at the cost of Q's suicide, which muddles whatever statement Q was trying to make.

The other big threat in this season, the emergence of a new Borg Queen in the 2020s, feels similarly undercooked. The writers don't take advantage of the chance to present the dangers of absolute control and enforced conformity that the Borg symbolize as a mirror for the similar tendencies reemerging in our real world. What would it look like for the Borg to come in contact with a culture that has already experienced the Trump era? That would have been a fascinating change of perspective, because in Star Trek the Borg have always served as a contrast to the Federation, but this season suggests that we, the humans of Earth, have the potential in our nature to become the same type of heartless all-devouring conquerors that the Borg are. That obvious low-hanging fruit is inexplicably left untouched.

Another missed opportunity occurs during the Borg attack on the Picard mansion, where our heroes retreat to the tunnels beneath. Those tunnels fulfill a double role in the backstory: they're the place where the young Jean-Luc learned that his mother's mental health was deteriorating, and also the shelter where the French resistance hid from the German occupiers. That history presented a fertile narrative possibility in connecting a refuge in the mind to a refuge against fascism. But once again, the writers didn't do anything with a thematic resonance that was crying out to be used.

Finally, the whole Soong situation makes no sense. It's already beyond tiresome to have Brent Spiner be the only face of the Soong family, but his role in this season is another instance of the Great Man myth. The new Borg Queen describes the forking road thusly: will humankind go the way of Picard, or the way of Soong? It's an extremely narrow view of how history works, an oversimplification of ongoing cultural trends that the writers should have been more aware of if they were going to set the story in our present day.

Yes, humankind in the 2020s is very much at risk of becoming the opressive regime of the Confederation. But this season of Picard only uses our present day as set dressing. The resolution of the threat Q created has nothing to say about our current situation, and repeats the familiar mistake of making a huge societal problem hinge on the choices of one individual.

It's even more frustrating to watch the season finale of Picard on the same day that Strange New Worlds premiered. In this new entry in the franchise, captain Christopher Pike recounts the difficult journey that Earth had to go through before becoming a Star Trek utopia. Using real footage from the violent conflicts of the past couple of years, Pike reaffirms the established canon that says 21st-century Earth had a world war motivated by eugenics. That's the immediate future Star Trek is saying awaits us. So what should we glean from our heroes' success at preserving the timeline in Picard?

This season had good material to work with, but didn't make the effort to make the best use of it. The writers knew that the season's themes had great significance for our current times, but didn't develop them beyond the barest box ticking. And the details added to Jean-Luc's backstory overcomplicate a character we already had a clear feel for. This portion of Picard's story is more notable for what it wastes than for what it adds to the ongoing Star Trek saga.

Bonuses: +2 for Kirsten Beyer, who seems to always elevate any script she has a hand in.

Penalties: −1 for too much empty fan service, −1 for a contrived resolution to Kore's journey, −1 because it's incongruous to devote so much attention to Jean-Luc's childhood without acknowledging his troubled relationship to his brother.