A lyrical, magical realist story about accepting the difficult parts and learning to love yourself. 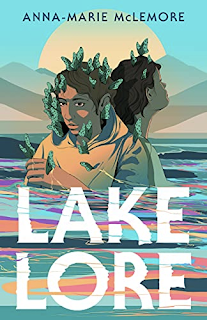 Lakelore by Anna-Marie McLemore focuses on what’s above and below not only the surface of the titular lake, but also the two point-of-view characters, Bastián and Lore. In this magical-realist, young adult novel, Bastián, Lore, and the lake all have trouble fitting into society’s designated roles. Bastián and Lore are both neurodivergent, trans, and Latinx, so they are often made uncomfortable by those around them and struggle with what to do with these feelings. When they meet, they find kindred spirits in each other and work to understand the other’s unique way of experiencing the, often magical, world. Bastián and Lore find solace in each other, even though that means developing a certain level of trust they don’t share with many. Over the course of the novel, their attraction turns to love in a slow, touching way that reminded me of Aristotle and Dante Discover the Secrets of the Universe by Benjamin Alire Sáenz. But their friendship and burgeoning love is threatened by their secrets and the pain stored beneath the lake.
As suggested by the focus on the world under the lake, much of the novel centers the interiority of the characters, demonstrating how Bastián and Lore understand themselves and their places in the world. While not a coming out story—both characters are very established in their trans identities—Bastián and Lore are figuring out when their bodies feel true, such as Bastián taking testosterone and Lore fluidly changing whether they present more masculine or feminine. While these moments are sometimes painful, such as remembering when they’ve been misgendered or scenes of bullying that could be triggering for some readers, there’s also a lot of joy in being accepted, particularly between Bastián and Lore, such as a delightful passage where they talk about making a “gender forecast” for each other. Bastián describes the day’s gender as “a perfectly folded T-shirt,” which feels absolutely accurate for them that day. As Lore says, “Sometimes you can’t separate the hard things from the good things” (213).
Similarly, McLemore doesn’t shy away from describing Bastián’s life with ADHD and Lore’s dyslexia impacting their schooling. According to the author’s note at the back of the book, this is an own voices story as the author is writing from their lived experience being neurodivergent (with both ADHD and dyslexia), nonbinary, and Mexican American. In the novel, the ADHD and dyslexia feel integral to how the characters experience the world rather than simply being tropes or tags. Through the novel’s alternating POV structure, McLemore shows how Bastián and Lore each adapt, spending time describing how each character feels inside their head. While developing their friendship, Bastián and Lore describe how their brains work to each other, which creates a greater depth of understanding, regardless of whether the reader experiences ADHD or dyslexia or not.
A highlight of this book is certainly the lyrical prose. While the description can be skimpy at times, McLemore focuses their writing prowess on the lake and its magical moments. For instance, one of my favorite moments occurs after Bastián gives Lore a glitter jar. The lake’s underworld spills its shores and imitates the colorful curves created by the glitter, as McLemore writes: “High above us, [the bubbles] break like they’re reaching the surface, the glitter spreading out and sticking there in constellations of cotton-candy pink and deep green, pale blue and copper” (177). Such lyrical passages provide a balance to the passages of interiority.
While the novel accomplishes the goal of capturing the characters’ successes and struggles, the structure of the novel made it harder to sink into a single character. Alternating between Bastián and Lore as point-of-view characters often feels unnecessary because the characters are together and experiencing the same things. Where the POV switching is effective is when they are having separate experiences that speak to their own identities, pasts, or passions. For instance, the scenes where Lore meets with an education specialist about their dyslexia or the scenes where Bastián is creating alebrijes (sculptures of mythical beasts made from papier mâché). In contrast, switching POV when Bastián and Lore are having similar experiences with the lake or are in the same location feels jumpy and scattered. Additionally, the chapters are usually the length of a single scene, and sometimes that scene is less than a page. Especially in the beginning of the novel, I struggled to engage with both characters because of the constant switching after only a page or two, even when the characters would be together in the next scene, thus making me question why we’d switched POV to begin with.
The short chapters and switching POV between the characters could help keep a young reader hooked in what is, in many ways, a slow, character-driven story. Rather, I found the structure works against this issue because it doesn’t allow the characters to really develop until much later in the book. Because this novel is more character-driven than plot-driven (what’s happening with the lake is not so much dangerous as spooky and beautiful), hooking the reader with these thoughtful, brave narrators is necessary.
All that being said, a voracious young reader would probably blow right past that opening, and for a young person who identifies with Bastián and Lore, the passages that detail their experiences with adapting to a system that their brains work against, their identities, their passions for art, could help a reader feel seen an understood, which is what the best young adult literature accomplishes.
_________

Bonuses: +2 for lyrical prose that can describe an alebrijes-filled lake and living with ADHD and dyslexia.

Penalties: -1 for a novel structure that felt jumpy and undermined getting to know the characters

Posted by: Phoebe Wagner is an author, editor, and academic writing and living at the intersection of speculative fiction and ecology. She tweets as @pheebs_w.