The final, and incomplete, work by a master of science fiction and fantasy. 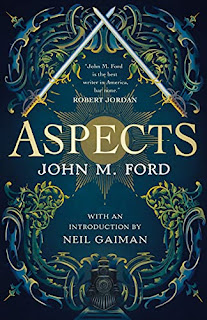 John M Ford, reviewed here previously by me, was a writer of singular and broad talent, with a focus on wordplay and language that comes through all the many splendored and varietal things that he had written. This is also true of Aspects.  Aspects is a epic fantasy novel, unfinished at the time of his death, that has not been completed by someone else, it is instead presented here, edited, as much as we have of it.

If reading incomplete books is not your cup of tea, if the fact that this story does end abruptly without resolution, then, honestly, you probably don’t need to continue on with this book review and can go, read The Dragon Waiting or something else. I admit that it poked and prodded at my brain, but I think the book and what it does, what we have of it, is worth discussing, even in an incomplete stage. Inside baseball, perhaps, but it is akin to being shown the first chapters of a book or part of a novella from a friend writer, asking for what they think of it and what works and what does not.

In that spirit, then, for those of you who have not closed the browser tab, let us proceed on, and forthwith.

The world’s analogue, Lescouray, goes to 19th century Britain, a Britain that is modernizing, with analogues to the telegraph and the railroads, a society moving forward toward what we would recognize as modernity. There are clear harkenings to the Renaissance, the Medieval period, and an ancient all conquering Empire that are clearly expys of the Romans.  There are filips to this, however. For example, Lescouray has recently gotten rid of its monarchy entirely. This is a country now ruled by its Parliament, particularly by its aristocratic lords, Corons.

That last bit bears some notice. Many fantasy novels default to empires, kingdoms, and other such hierarchical systems of government. And even rarer, when we do have political systems that are not monarchical, such novels and stories rarely engage heavily with such representative (even if its aristocratic) governments. Aspects is a novel where two of the major characters are in the Parliament (as are a couple of secondary characters), and legislation and the sausage-making of getting bills passed is important to the plot. The fact that this country is still trying to make its way with its Constitution and figuring out what to do with itself, politically (including thorny foreign affairs) is part and parcel of this universe.

Oh, and this is a world with magic. What and who sorcerers are and what they can do is left deliberately blurry (and there are discussions in the text about trying to make a science of magic and whether that is possible now, or ever, or just a folly). Still, there are definite kinds of magic and kinds of magicians, and we meet several magicians in the book. Foremost among these or most prominently, is Lady Agate, who is a magician of poetry, with an intense bond to one of our two protagonists. But some are truly frightened of sorcerers and the dangers they can pose, if untrained. And even a trained mage is a danger and a threat to others.

Aspects, though, focuses on two characters set in this world, their meeting, their parting (and one can predict their reunion but the book is incomplete).  On the one hand is Varic. He is a Coron who at the start of the novel is dodging attempts to kill him by means of being challenged to duels. (The novel in fact, starts with such a duel). This world may be struggling toward what we recognize as modernity, but it is still sharp and dangerous and harkens back to an earlier time. He mostly lives in the central city of Lystourel although his second home is not his home Coronage, but rather, the strange and wonderful Strange House of which I will speak anon.

On the other hand is Longlight. Another Coron, she is from a wild, more isolated and bandit plagued part of the country, where even roads are few, and the Ironways stops well short of her holding. If we are going with British Isle metaphors, she is a noble from an isolated Scottish or Welsh dominion. The Ironways haven’t gotten there yet, hers is a world which is working toward modernization but it is a slow and expensive process. Longlight also has trouble on the homefront, now, with her budding relationship with the aforementioned , her current partner is not going to take this well. The thickets and thorns and entanglements of relationships of all kinds is a running and abiding theme of the novel as we have it, and whither the relationship between the two Corons, no one can say. The end of the text is followed by a couple of sonnets, presented as showing the possibilities of what might be with the characters.

I did mention wordplay earlier on, and readers of other works of Ford will expect it, and in Aspects, he delivers. There is poetry, sonnets, plays on words, mostly wonderful and inventive use of language. He invents or repurposes Latin to express concepts where he doesn’t use our words. It feels like, no surprise, he delights in this invention. It’s not to the level of the sometimes nearly impenetrable Uncleftish Beholding by Poul Anderson ( https://en.wikipedia.org/wiki/Uncleftish_Beholding ) but everything has enough context for you to pick up any meanings and, hopefully, delight in his invention. He certainly didn’t have to do it this way, if he used railroads instead of Ironways, I don’t think anyone would have batted an eye. It is however, a very Ford thing to do.

The best portion of this unfinished novel is a long set piece in Strange House. Strange House is all of a place that people wishing to escape into novels and their worlds and characters could wish for, and Varic taking Longlight there to his friend’s estate for the winter holiday is a highlight of the book. Varic is a longtime visitor, and well known to its master and those who inhabit it, but Longlight is new, and we get to meet the characters who inhabit this island and place of respite with fresh eyes. From books, to food, to even wargames, Strange House is one of those locales in fiction that readers will wish were actually real to go there. And yet it is not all saccharine, as the budding relationship between Corons is tested by Varic’s longstanding relationship with Lady Agate. But I know I would love to visit such a place for the holidays, and meet the people who have congregated there in a rich and wonderful found family.

Ultimately, though, the book is an opportunity to read more of Ford’s work that, unless you were very lucky, you’ve never seen. It’s a frustratingly incomplete fragment of a book, but it is an incomplete meal, a poem unfinished, a movie whose ending has been cut off. Can you accept the fragment for what it is? If you can, then you will love Aspects. I suspect I am preaching to a choir here--if you are a Ford fan, you already want this. And if you aren’t a Ford fan already, this is absolutely and positively NOT the place to start reading him. There are questions in the genresphere of “who a book is written for” and whether books need or should even be for everyone. I feel that ASPECTS is not for everyone. This is the John Ford book when you are in a drought of Ford, and want a little more of the gold of his writing, untimely unfinished as it is.

Rating: Because this is an unfinished novel, I ultimately cannot give it a score.