Holly Black’s first foray into adult fiction, blending her YA vibes with a bit of extra darkness. Both literally and figuratively. 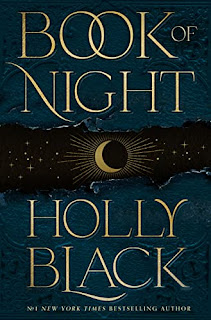 I read a lot of Holly Black YA when I was growing up, and she has a Vibe. She tends to have slightly feisty female protagonists who come from less-than-ideal circumstances, and succeed in magical or strange situations using their wits and grit to overcome people with more power than them. They also often meet men on the way who are tied into those magical worlds, and go past initial dislike or apathy to find that they’d do absolutely anything – even dangerous, disastrous, extremely inadvisable things – to keep hold of them. It’s not a desperately original formula, but it’s one that absolutely worked on me in my teens and kept me coming back for more. None of them were groundbreaking books, but they were fun, pacy page-turners with sympathetic (if not always likeable) main characters and interesting, immersive worlds.

Her first foray into writing for adults is simultaneously definitely more grown up, but also 100% the same feel. Which is quite interesting.

The story follows Charlie Hall, a reformed con artist and thief who used to work adjacent to the shady (ha) world of the gloamists, who work magic on shadows, but she’s now trying to keep on the straight and narrow. She’s working a normal job bartending at a dive bar, dating a reliable boyfriend about whom she’s having some doubts and trying to help her little sister get into college. Obviously, this doesn’t last, and she gets pulled back into the world she tried to leave behind. Much like Black’s YA books, the plotting isn’t desperately original, but that’s also not what it’s aiming for, really.

What it is aiming for, and succeeds at, is a fun, dark, enthralling bit of world building, something that the reader can immediately get sucked into and get the feel of, while still with plenty of mileage to build throughout the story. And her gloamists are absolutely that. There’s sexy crime – daring heists of secret magical books – as well as secrecy, hidden arts, a potential pedigree stretching way back into history – the secret magical tomes to be stolen have to come from somewhere, right? – and plenty of scope for there being downtrodden people who can use their wits to outfox the powerful. It's got a lot of common themes, both of Black’s previous YA work and a lot of successful fantasy more generally, but some of its own twists and originality too, so it doesn’t feel too samey. Black also does a solid job of providing good exposition while not oversaturating the reader with it – again, a strength very present in her YA work – so that you’re left wanting to find out more, even by the end of the book. I do not now have a full and comprehensive understanding of… pretty much anything to do with shadow magic, just what was necessary to drive the plot along at a heady pace.

And some of this is because she chooses to have a protagonist who is not a practitioner of the magic she’s come up with, a choice I think is pretty excellent. So much of Charlie Hall’s character is about introspection on her past failings, living with her own limitations and flaws, and having her start the book as one of the powerful would have made all that the much more difficult. Her role in the story and the world is to be a problem or an employee of those with power, and she needs to exist outside of that power, at least a little, for this to work.

And this is very much where a lot of the not-YA feel comes in. The story and some of the characters are very invested in social power, social status, and how it is misused, in a way that I think would have been unusual in Black’s earlier books like Tithe. None of her books are particularly cheery, and none of her protagonists from easy, happy lives, but the extent to which Hall dwells on her failings, and the way that Hall is that bit older and it’s her own failings, not the difficulties of her background, has a jadedness which I think would be a little out of place in her YA toned books.

That being said, I think this is also the failing of Book of Night (well, one of the two failings). Hall spends a lot of time in the book – and I mean a lot – on fairly repetitive introspection focussing on her own dark past, poor choices and the events of her life. At first, it seems to work well, and it gives you a really good sense of who she is, where she’s coming from, why she exists in the world she exists in, and why she’s trying to distance herself from gloamists and her past as a thief. But as she gets pulled back in, she spends less time reacting to the events of the book than one might expect, and the story feels pulled in two directions, between the events we’re seeing and the focus on Hall’s introspection, bogged down in her past. By the end of the story, we do manage to punch through, but there’s a hard slog around 2/3 way into the book where it just begins to feel like A Lot, and that it is hindering the actual plot from progressing. The resolution doesn’t quite make it all worthwhile, and has all the tortured romance hallmarks one would expect from Holly Black, but it does do some legwork to make it all square out eventually, which is something. It’s just a bit difficult to get there at times.

It does, however, also serve to feel like the way Black is adultifying (that’s definitely a word) the story is precisely by stressing this stuff, while not really doing much to change up how she’s crafted anything else. And so at times it feels like the grown-upness is a thin veneer on top of a YA book, rather than a fundamental difference in approach.

The other failing is a minor one. Throughout the story, we are told about the Liber Noctem, a key book to the plot and several characters, which is, unsurprisingly, translated throughout as “the Book of Night”. The Latin is, however… not quite correct (it ought to be Liber Noctis). Does this actually matter in any real sense? No, not at all. But it came up enough times it was niggling me throughout the story. And it would be so easy to have got it right.

Aside from those two issues, it really is a good, fun read. I’m no longer 16, so no longer quite so in love with the story structure, tropes and vibes that Holly Black does (and does well!), which is sad. But I still tore through it, and felt like I was stepping back into an old childhood bedroom. The nostalgia was lovely, it was familiar and cosy and comforting, but it’s not where I want to live anymore.

Penalties: -1 for not entirely committing to it being an adult book, more just a sprinkling of murder and adult themes on top of a YA book