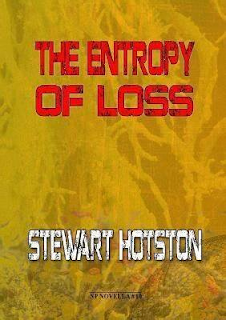 The Entropy of Loss by Stewart Hotston (Newcon, 2022)

Sarah Shannon is having a weird evening. She's visiting her wife, Rhona, an artist  in the final stages of a terminal illness, when she gets a call from her colleague Akshai. That call pulls her back to the lab where she works on black hole research, to look at some strange data which suddenly throws them into a weird, reality-bending first contact situation. To make things more complicated, Sarah has been dealing with her grief over Rhona's imminent death by having an affair with Akshai, and when Rhona becomes trapped in Sarah's newly transformed lab with the new entity, Sarah's grief and her work become inextricably linked.

The Entropy of Loss has a lot to set up in its opening pages, and it ends up feeling quite artificial, although it's hard to see how Hotston could have done anything differently in novella length. Thus we bounch from hospital - to establish Sarah and Rhona's dynamic and Sarah's emotional state - then to the lab to set up Sarah, Akshai, and the black hole simulation, and back to hospital so Sarah can have Rhona want to come back to the lab again, so she can become trapped with this new alien life. It's easily the weakest part of the book, and that's a shame because once the scenario is established, this becomes a great novella, intertwining an engaging science fiction scenario with the complex emotions of its protagonist. We're long past the cliche of "scientists don't have emotions because science is too rational for feelings" in science fiction, but by making Sarah's emotional investment in her breakthrough (and its security implications for campus) extremely personal, and filtering the first contact communication itself through Sarah and Rhona's relationship dynamics, The Entropy of Loss creates a rich story that hits much closer to home than your average action-packed alien visitation. Just go with the set-up stuff and you'll be rewarded with a really intriguing novella that's well worth checking out. 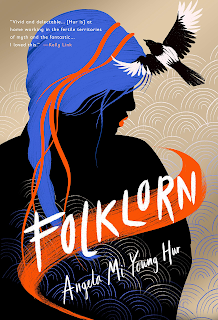 Reviewing has been hard recently, and I'm sorry to say that Folklorn sat unloved in my "to read and review" folder for far longer than this strange, thoughtful story deserved. This is the story of Elsa, a second generation Korean American physicist working at a Swedish university who we meet when she is finishing a research trip to Antarctica. Feeling out of place as an Asian woman in a white-dominated environment, and working through the emotions of finishing her research and leaving Antarctica - and a boyfriend who will be wintering over, which she assumes (correctly) will be the end of their relationship - Elsa begins connecting things around her to the stories and myths her mother (who has been unspeaking and catatonic since Elsa's teen years) told her as a child, and to a "friend" she had at the time, a girl the same age who nobody else could see. It's the re-emergence of her imaginary friend which pushes Elsa into a reckoning with her family legacy, in a journey that takes her from Antarctica to Sweden and back to her family home in California.

While the ghost on the ice, and a later death in the family, provide catalysts for Elsa's journey, it's her internal emotional factors which really drive the narrative, making for a slow read with a lot of introspection. The biggest force here is intergenerational trauma: Elsa's parents lived through the Korean War, and Elsa has grown up with stories about missing relatives and disappearing Aunts, as well as a sister born between her and her brother who, allegedly, died at birth. Unpacking her family's legacy, and her relationships with her parents (both of whom have been abusive in their own ways) and her difficult, mentally ill brother, becomes a huge task, one which Elsa tackles through the lens of myth, uncovering a lineage of disempowered women in Korean folktales through her mother's writing and tying her story to theirs. Elsa is herself a challenging protagonist, at turns lashing out or ignoring help from those around her, and centring her own emotions at the expense of others, but it's done in a way that will feel very familiar to those who have experienced certain kinds of mental illness, and Folklorn's diagnosis feels redemptive: forgive the family who hurt you, especially if they were hurting themselves, but don't let them stop you from growing past the trauma. It's powerful stuff, told in a haunting, affective way. 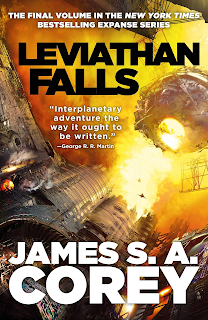 What is there to say about a book that wraps up 9 volumes of one of the genre's most influential space operas? Leviathan Falls brings to a close the story of The Expanse, a generation-spanning narrative about human expansion in the solar system and beyond, and the political struggles that accompany these changes in the structure of human civilisation. From relatively humble (and very dudebro-oriented) beginnings in Leviathan Wakes, the series has encompassed space-faring revolutions, potential extinction events, the arrival of terrifying new alien technologies, and finally an intergalactic war for the future of humanity, with the crew of the spaceship Rocinante at the heart of the action at every step. Now, after seeing off the series' second most unpleasant charismatic dictator (sorry Duerte, but Marco will always have you beat), the final chapter is about the moment that has been brewing ever since the protomolecule came into human hands in Leviathan Wakes: when wil humanity need to reckon with the unknowable alien technology at the centre of its galactic expansion, and with the alien force that wiped those super-advanced predecessors out?

This is an extremely important question, but it does mean that Leviathan Falls is working firmly in the territory where (in my opinion) the series has been weaker: the "weird alien shit" plots have never hit the highs of the "political shenanigans" plots, which is why Cibola Burn is inarguably the weakest book of the series and Nemesis Games is the best (don't argue, you won't win). But Leviathan Falls overcomes that, for two reasons: first, because we are at the endgame and there are finally some answers to what, until now, have been unknowable events; and second, because after a generation of research on the rogue fascist world of Laconia, the weird alien shit is inextricably linked to human technology and ambition. Building on the first two books in the "Laconia" arc, we therefore get a satisfying inversion of the series' consistent "adapt or die" theme the solutions for adaptation presented by Laconians are awful, the results of decades of unthinkably unethical research, but nine books has taught us that one can't magic easy third solutions out of thin air in this series. And, sure enough, there's a powerful and fitting ending here, one that puts the focus back on Naomi, Alex, Amos and Holden as, once more, the wildcards in determining the future of humanity.

There are some elements that don't work as well as others. The series' strongest supporting characters, Bobbie and Avasarala, are gone, and Aliana Tanaka, the Laconian officer who becomes the book's main human antagonist, is fine but not particularly exciting for the amount of time we have to spend with her (Elvi and Teresa are great, though). On the whole this is a strong end to a series that, despite its ups and downs, has firmly earned its place on my all-time favourites list.